In April, Let’s Wait For Fog To Clear

Equity markets entered into correction territory in late March. Markets now appear to be at a crossroads as investors doubts are persisting in early April. The emerging U.S. trade war with China, the NAFTA negotiations that could be settled as early as mid-April or drag on until 2019 as well as a deteriorating geopolitical environment are casting more uncertainty over global growth and helping explain market participants’ conundrum: We either have not much to fear as recent economic indicators suggest that growth is well entrenched in all regions of the globe; in this case, equity markets, at current level, might offer a good entry point to investors. Or, the rout will continue as long as the sources of the anxiety gripping equity markets persist; in this alternative view, it may be more prudent to stay on the sidelines until uncertainty abates.

For the month of April we thus remain neutral on equities against bonds waiting at least for some of the fog to clear up before committing to a riskier position. There are also reasons to worry about the rosy economic outlook for 2018 and beyond. A confirmation of this outlook could force the Fed to overreact to prevent inflation, quickly leading to higher interest rates and lower market multiples. Alternatively, a premature slowing down of the economic momentum also risks affecting negatively equity markets, still pricy in this less optimistic scenario.

Falling indicators such as the U.S. Economic Surprise index and the recent downturn in both the IFO Expectations Index and the ISM New Orders-to-Inventory Components ratio suggest that growth momentum may be peaking. Furthermore, after reaching a cyclical high in February, the Global ZEW current Conditions indicator fell on a month-over-month basis in March. This is relevant, because historically, the trend of the Global ZEW Index tends to be strongly correlated with the relative performance of shares versus bonds and cyclical versus defensive sectors (see chart below). 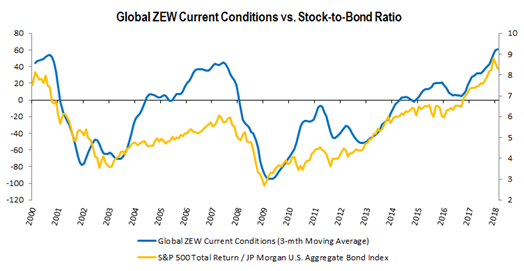 The good news is that, in our view, the macroeconomic backdrop remains solid despite the recent increase in borrowing rates. Business indicators such as the EPS are still on the rise, initial jobless claims fell to the lowest level since 1969 and the Conference Board index of consumer confidence is still rising. All support the case for an economy that is able to digest higher rates if the increase is gradual. Emerging market equities also fared quite well against developed markets during the global equity sell-off, also suggesting that the economic backdrop remains strong despite rising bond yields. The increase in market-based inflation expectations to new highs since September 2014 is also consistent with robust economic growth. However, we remain concerned that growing headwinds for equities over the coming months could be coming from trade tariffs, accelerating inflation data that would bring monetary policies to tighten abruptly as well as a deteriorating geopolitical environment. As a result, we maintain our neutral stance on equities.

There is no major change to our regional allocation this month with our largest overweight remaining Canadian and Emerging market equities. Canadian stocks remain historically cheap relative to U.S. equities and we continue to expect prices to rise further in 2018 on the back of a tightening global oil market and as constraints on market access in Canada get resolved. The combination of robust global economic growth, accelerating emerging market growth and high OPEC compliance with their production cuts should help to keep the oil market relatively tight this year. We also remain our overweight in emerging market equities as they remain cheap relative to developed market equities. Macroeconomic conditions also remain ideal for emerging markets, with low real rates, soft inflation measures, easy financial conditions and improving global trade. Forward earnings for emerging markets are also accelerating relative to developed markets, which represent another tailwind for EM equities.

In contrast to the recent previous months, there is a slight change in our sector allocation for April. We decided to switch our position in Information Technology in favor of the Consumer discretionary sector because of the elevated market valuation in the IT sector. We are recommending that clients play the risk-on trade through overweight positions in the Industrials, Financials, Energy and Consumer discretionary sectors in the U.S. and Canada. For Canada, we also recommend to keep an overweight in the Materials sector.

Our expectations for earnings growth to continue accelerating and economic growth to remain robust in the near term, combined with still easy financial conditions and equity inflows continuing to improve largely support our call to still favor a majority of cyclical assets over defensive sectors; this in spite of their relative elevated valuations (see chart below). Moreover, cyclical earnings relative to defensive sectors continue to accelerate, supporting the outperformance of cyclicals. Our expectations for accelerating inflation data should also contribute positively to the relative performance of the Energy sector which historically tends to outperform the broader market during episodes of higher inflation. 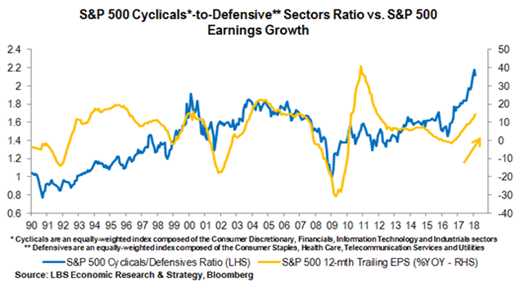 Simultaneously, the move to higher yields should continue to benefit cyclicals against defensive sectors as rising rates largely suggest strong economic growth as long as the global economy continues to be able to absorb higher yields. Rising market-based inflation expectations also appear to confirm improving economic growth. On the other hand, if interest rates were to rise too quickly and eventually reach levels that would choke economic growth; the relative performance of cyclical stocks would suffer. The recent weakness in U.S. and Canadian housing data could be a sign that higher rates may have finally started to negatively impact the real economy and we will closely monitor future developments in interest sensitive economic data to see if we should adopt a more defensive positioning within our sector allocation in the coming months. In addition, the recent turn lower in economic data surprise indices should be monitored closely as this may point to the peaking in the economic momentum. Data remain strong but a potential moderation in economic momentum with more data releases missing increasingly optimistic economic estimates may eventually weigh on the relative performance of the cyclical sector relative to the defensive equity (see chart below). 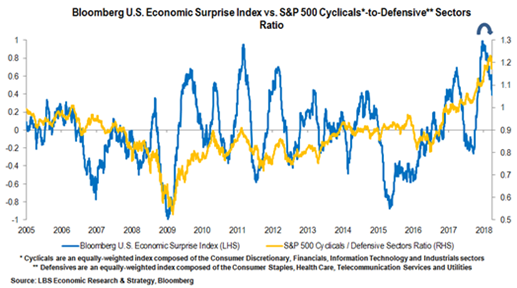 Finally, according to our recession model, the risk of a near-term recession has remained the same, at around 10% This is important as rising probabilities that the U.S. economy is about to enter a recession within the next six months have historically tended to coincide with an outperformance of defensive assets over cyclicals (see chart below). We will also closely monitor future changes in the indicators mentioned above over the next few weeks to see if we should soon adopt a more defensive positioning within our sector allocation. 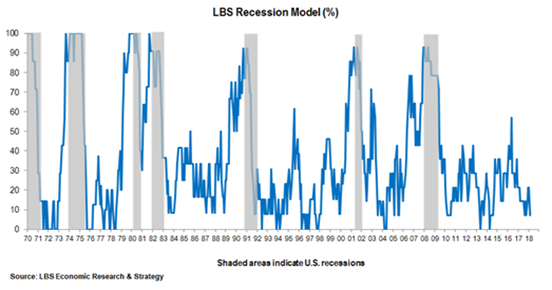 We maintain our neutral stance on corporate bonds this month as valuation remains historically rich, especially when adjusted for elevated corporate leverage. We are also concerned that the decelerating global economic momentum, coming slowdown in earnings growth and central banks withdrawing stimulus could hurt the relative performance of credit in the months ahead. Moreover, with the output gap in both the U.S. and Canada closing for the first time since the Great Recession, this should exert upward pressure on inflation data and negatively impact the profit margin outlook of corporations as margins historically tend to peak soon after the output gap closes.

Other major asset classes are also sending warnings signs to the credit market with the 30-day rolling correlation between the and U.S. 10-year Treasury yields now in negative territory. Over the past 10 years, this historically tended to occur prior to broad weakness in riskier assets (June 2007, August 2011, June 2015 and January 2018). Investors should also pay close attention to warning signs coming from the commodity and equity markets with the copper-to-gold ratio weakening and strong balance sheet stocks outperforming weak balance sheet stocks. This is also suggesting that the global economic momentum may be peaking, acting as a headwind in the credit space. On the other hand, the low risk of a near-term recession should support the relative performance of credit by keeping defaults low in the near-term. 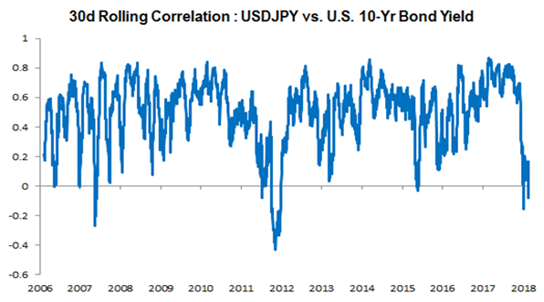