In part one we discussed the use of basic trendline analysis – In this piece we’ll further build on this concept and review how parallels of these trendlines can utilized to give structure to a market advance or decline. The objective of this methodology is to attempt to identify the gradient or angle of the market trend in order to zero-in on possible levels of support and resistance. Let’s start by de-constructing a setup in order to understand how we formulate a given trade opportunity using slope analysis.

There’s power in parallels. Most new traders are familiar with basic channels in price action- but channels are just the start! Using parallels are a simple add on that can greatly enhance your ability to identify key reaction points in the markets.

The simplest way to get started is to identify an initial trendline of support or resistance that the market has been responding to. Once that trendline has been found, a parallel (copy) of that trendline can then be extended to the other side of the move (most recent key high / low) to create a channel – this is the very basics of identifying slope. The parallel should now serve as the support / resistance structure for the trend and as the market continues to advance, look for pivots off corresponding parallels of that slope for further validation that we have identified the proper gradient or angle of the trend. 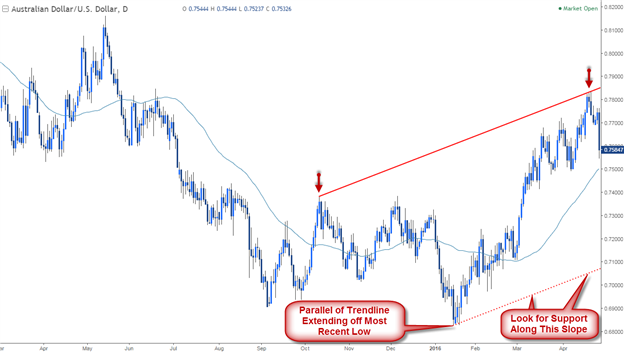 Consider the trendline (resistance) connecting the two major peaks in late-2015 and early-2016 in AUDUSD. A parallel of this slope extending off the 2016 low was critical in identifying support on the late-April decline as Aussie was in free-fall. 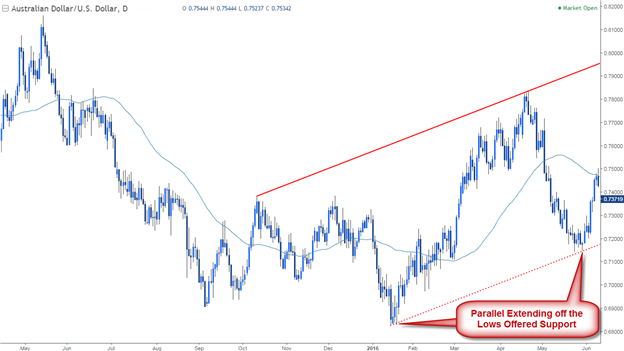 This rudimentary use of parallels can be extremely useful in identifying basic pivots in price- which for us as traders, means entry / exit points. But where would we look for resistance on this reversal off support? Enter the pitchfork. 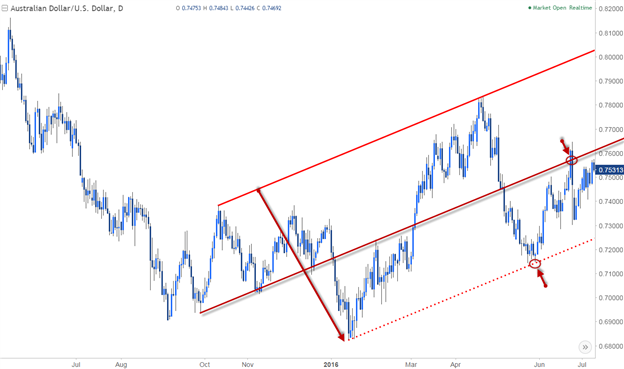 In the AUDUSD example above, the June rebound off the lower parallel calls for a rally into the median-line of the range. Indeed, a parallel bisecting the channel (extending off the 2015 September low) offered a clear pivot in early 2016 and was an effective target for the rally which capped out just higher later that month. This simple example illustrates how we use slope as a basis for targeting support / resistance. 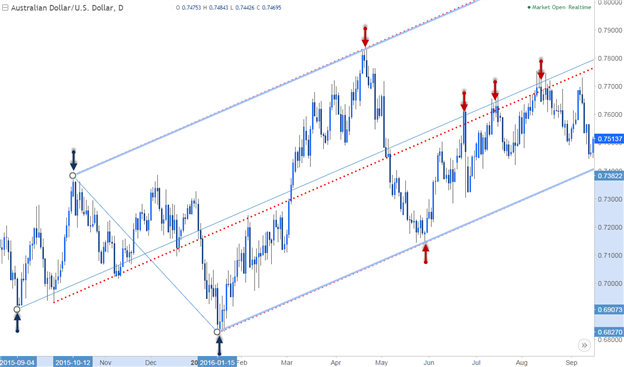 Consider the same chart above. A pitchfork can be applied by using the three reference points of the most recent low-high-low into the 2016 open (blue arrows), offering an up-trend to work with. As often will be the case, the slope is IDENTICAL to the previous slope derived off the subsequent April high- meaning this formation would have alerted us much earlier to where the April rally ultimately found resistance. Note that on each subsequent rally, the advance reversed off the median-line with the final attempt in August ultimately pulling back into the lower parallel. This simple drill is meant to highlight that identifying the proper gradient, more-so than the tool used, is the most important aspect of slope analysis- obviously the earlier the better.

Some important aspects to keep in mind when drawing pitchforks:

Once you have clearly identified a slope, parallels extending off key highs and lows will often times offer clear pivots in price and will be levels of interest for both targets & entries. It’s also worth noting that median-lines will be of added technical significance when they converge on other key technical indicators such as moving averages, Fibonacci levels, monthly / yearly highs & lows and sentiment.

As with any form of technical analysis, these methods take some practice and are often seen more as an art-form than a science. That said, median-lines can be extremely useful in identifying key reaction levels within market trends and once mastered, can be a crucial part of your trading strategy. In part three of this series we’ll discuss how this type of analysis can be utilized on multiple timeframes and with a combination of overlay technical indicators to create a more holistic trading strategy.