Tuesday, Nov. 6: Five things the markets are talking about

It not a surprise to see a mixed picture across global equity markets overnight as investors are very much in a ‘wait-and-see mode’ ahead of today’s U.S. mid-term elections.

The latest polls suggest the Democrats have a good chance of winning the House and the Republicans have a good chance of retaining the Senate. In that scenario, consensus sees the U.S. dollar and interest rates easing on the view that chances for any further U.S. fiscal stimulus are reduced, and that’s assuming that political ‘gridlock’ has not already been priced-in.

But, if the Republicans surprisingly hold Congress, the dollar, stocks and Treasury yields would get a lift on the promise of Trumponomics 2.0.

Elsewhere, Euro bourses have edged a tad lower alongside U.S. futures, while Asian stocks advanced, taking their cues from Wall Street on Monday.

Sterling again has found some support on further Brexit hopes, while U.S. Treasury yields and the ‘big’ dollar are steady.

In Japan, the average rebounded overnight, tracking gains stateside Monday, despite Apple (NASDAQ:) suppliers falling on a report that the tech giant has scrapped plans to boost production of its new iPhone. The Nikkei rose 1.1%, recouping much of the previous session’s 1.6% losses. The broader gained 1.2%.

Down-under, shares ended higher overnight as metals and mining heavyweights rallied on higher iron ore prices, although trading volumes were cautious ahead of today’s U.S. mid-terms. The rose nearly 1% at the close of trade. In South Korea, it was a similar scenario, the index ended higher, up 0.61%, but gains were capped on investor caution. The index is down nearly 10% in the past month.

In China, stocks ended lower overnight despite a number of policy moves to support equity markets amid worries over the possible impact of a new technology board. At the close, the blue-chip index was down 0.6%, while the lost 0.2%.

In Hong Kong, stocks erased early losses and ended higher overnight on promised targeted policy steps to support private companies. At the close, the was 0.7% higher, while the China Enterprises Index was up 0.8%. 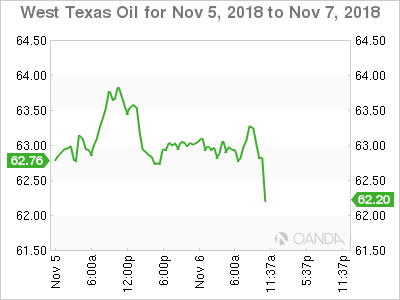 Oil prices remain under pressure, weighed down by sanction exemptions from Washington that will allow Iran to keep exporting to some of their largest clientele, as well as by concerns that an economic slowdown may curb fuel demand growth.

The Trump administration has given a six-month reprieve to eight importers – China, India, South Korea, Japan, Italy, Greece, Taiwan and Turkey. These are Iran’s biggest buyers.

While Iran’s crude exports could fall to little more than 1M bpd this month, the market believes that figure could rise again next month as importers – including China, Japan and South Korea – use their waivers to order crude from Iran.

Note: On the supply side, oil remains plenty despite Iranian sanctions as output from Russia the U.S. and Saudi Arabia continues to rise.

And finally, growing concerns over the prospect of a global slowdown amid the ongoing Sino-U.S. trade war are also weighing on prices.

Ahead of the U.S. open, gold prices are little changed before today’s U.S. midterm elections that may fuel interest in the ‘yellow’ metal as a hedge against risk if the result sparks volatility. is unchanged at $1,233.20 per ounce, while U.S. are up 0.1% at $1,233.8 per ounce. 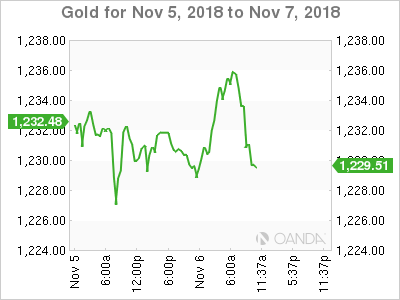 Italian government BTP yields again have backed up after eurozone finance ministers called on Italy to change its budget, while broader eurozone bond markets are little changed ahead of U.S. congressional elections.

Note: Eurozone finance ministers called on Italy to change its 2019 budget before a deadline set for next week to conform to EU rules.

Italian BTP yields are 5-6 bps higher on the day. Italy’s 10-year bond yield has rallied as high as 3.39% this morning, pushing out the gap over German Bund yields to 295 bps from 289 bps late yesterday.

Elsewhere, the yield on U.S. 10-year notes has increased less than 1 bps to 3.20%, while in the U.K., the 10-year Gilt yield has gained 1 bps to 1.515%, reaching the highest in more than two weeks on its seventh consecutive advance.

Down-under, the Reserve Bank of Australia (RBA) left its Cash Rate Target (NYSE:) unchanged at 1.50% (as expected) and reiterated their stance that low rates are supporting the economy. They raised 2018 and 2019 GDP forecasts from 3.0% to 3.5%. 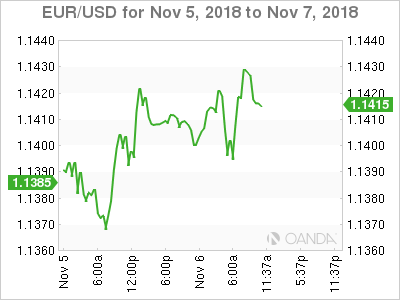 The ‘mighty’ buck is little changed as investors focus shifts to the U.S. mid-term elections.

The market expects an 85% chance that Democrats take the House and 85% chance Republicans hold the Senate. However, if the GOP surprisingly holds onto its majority in Congress, the USD, equities and Treasury yields are expected to get a lift on the promise of Trump 2.0.

is unchanged, trading atop of the psychological €1.1400 handle.

(£1.3031) is a tad lower on news from U.K. Trade Secretary Fox that there are still a number of Brexit issues to be addressed. He reiterated that it was unacceptable for any deal to treat Northern Ireland differently.

5. Eurozone growth weakens to lowest in over two years

Despite coming in higher than the earlier flash estimate of 52.7, October’s final reading of 53.1 was down from the previous month’s 54.1 to the lowest since September 2016.

Digging deeper, both the manufacturing and service sectors recorded slower rates of growth during the month.

Following on from September, manufacturing registered the weaker increase in output, posting its lowest growth in nearly four-years, while despite remaining at a solid level; the service sector saw its slowest expansion since the start of 2017.

By country, the strongest increase in activity was again seen in Ireland, while both France and Spain recorded firmer gains in activity.

In contrast, Germany saw growth slump to a five-month low, whilst Italy registered a fall in activity for the first time in four years. 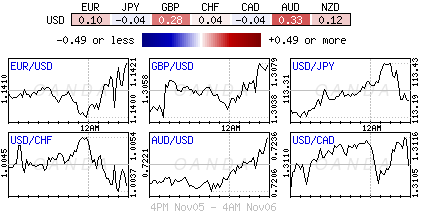