HomenewsMarket OverviewIt Will Be Close, But Expect Bank of Canada To Keep Rate Unchanged

It Will Be Close, But Expect Bank of Canada To Keep Rate Unchanged

We expect a very close call for the monetary policy decision on Wednesday, with the Bank of Canada (BoC) leaving the overnight rate target unchanged at 1.25%.

Making the case for a hike could be supported by recent developments:

2. prices stand above the US$60 per barrel price incorporated in the BoC’s April MPR;

4. There are growing signs of robust and persistent wage growth for Canadians.

This being said, there are key arguments favoring the delay of the next hike:

1. The May deadline miss for a NAFTA deal in a context of declining market share of Canadian exports in the U.S.;

5. Political turmoil in Italy is bringing back anti-euro concerns in financial markets.

Also, we expect a third consecutive quarter of soft economic growth in the Canadian real report to be released on Thursday morning. Our call stands at 1.5% q/q saar for 2018 Q1 (consensus at 1.9%), close to the 1.3% projected in the BoC’s April MPR. The details of the report are likely to be disappointing, led by slower growth of consumer expenditures, a pullback in housing activity after B20 rules pulled forward demand in late 2017 (see chart below) and weakening net exports. Government spending and strong inventory accumulation will likely have contributed significantly to real GDP growth.

Bottom Line: Given the transparent cautious hiking bias present at the end of previous BoC statements, it should not be a major surprise for financial markets if the BoC ends up increasing its policy rate by 25 basis points on Wednesday. This being said, in our view, the latest global and domestic economic developments are not sufficiently favorable in order to hike on May 30th. We continue to see the next policy rate increase on July 11. 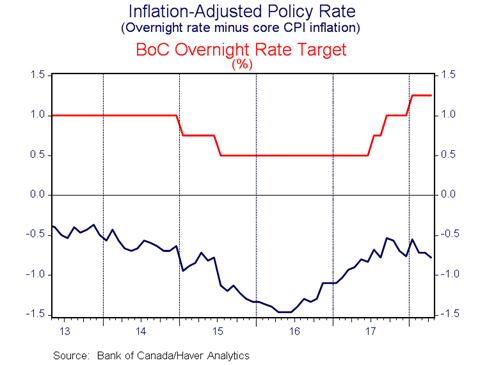 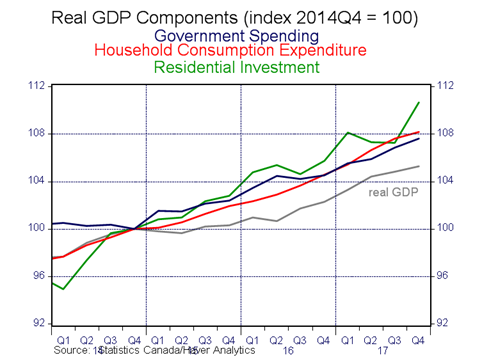