The FTSE MIB (-0.9%) and BTPs have sold off following reports of an apparent rift between the Italian Finance Minister Tria with coalition leaders Di Maio and Salvini. Finance Minister Tria, whose appointment brought relative calm to the markets, now faces the prospect being forced to resign which would likely lead to rising BTP yields and weigh on the FTSE MIB. The initial reaction to this report has eased slightly, however, headline risk remains. 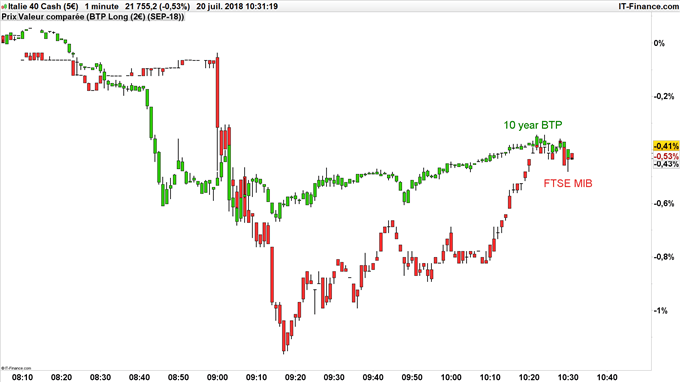 Elsewhere, comments by the recently appointed Head of the Budget Committee, Borghi, also added to the negative sentiment, having stated that “sooner or later Italy will leave the Euro”. Although, Borghi is a known Eurosceptic, whose critical views on the Euro are very clear and thus not an awful surprise. It does raise the concerns that an Italian exit from the Euro is a real possibility. Subsequently, this has prompted a flight away from Italian assets, with 10yr Italian bond yields rising 5.5bps to 2.56%, while BTP-Bund 10yrs spreads have widened by 3.3bps. 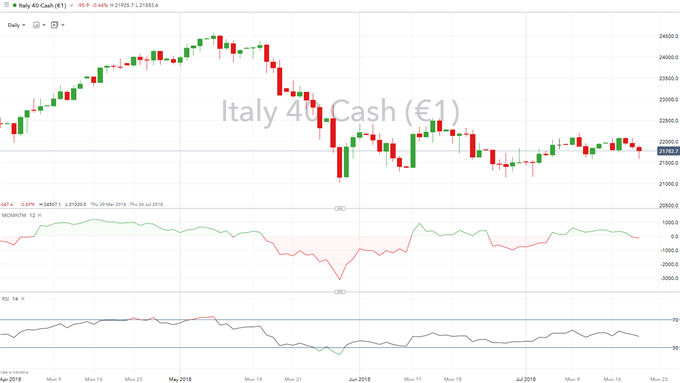 Risks are tilted to the downside with momentum swinging into the red, while the Relative Strength Index is also trending lower. While still some way to go, key levels on the downside is the 21160-double bottom, before the psychological 21000 level. On the upside, 22000 will likely offer resistance. Headline risk remains prominent, as such, reports suggesting that Tria is on the way out could provide renewed selling pressure.

If you are new to trading, or if you would like to update your knowledge base, download our New to FX Guide and our Traits of Successful Traders to help you on your journey.