The unity of the Eurozone and European Central Bank were pressured again Monday, after Italian Minister Claudio Borghi called for capped yield spreads on Eurozone bonds. Mr. Borghi is the League’s economic spokesman and president of the lower house budget committee. The League party has been governing jointly with the Five-Star Movement since June, after an inconclusive election in March. Borghi’s apprehension echoes anti-EU sentiment held by both parties now guiding Italy leading up to the election.

Following the Turkish lira’s recent loss of value, Italian bonds rose to their highest levels in two months. Similarly, Spanish and Portuguese yields also advanced as investors look to ‘de-risk’. Borghi argued the contagion spreading from Turkey to some Eurozone economies showed that Italy’s domestic and economic situation was not the main reason for market pressure on its stocks and bonds in recent days.

To combat this, he asserted that the European Central Bank offer a guarantee to cap yield spreads in the Eurozone. “The situation can’t be resolved and it is going to explode” he later said, referring to the shared euro currency. His suggested remedy was a 150 basis point limit on the spread between Eurozone country’s bonds. “Either the ECB offers a guarantee or the euro will be dismantled,” he concluded.

Despite the negative comments regarding the bloc, the League has repeatedly denied any plans to exit the single currency system since aligning with the Five-Star Movement. The recent stance maintained by the League could have contributed to the muted response in the EURUSD pairing. The more headline-worthy concerns in the country’s and region’s exposure to Turkish debt pressured by the exchange rate likely further complicated the Euro’s response. At the time of this article the pair traded around 1.1405, hardly changed from open. 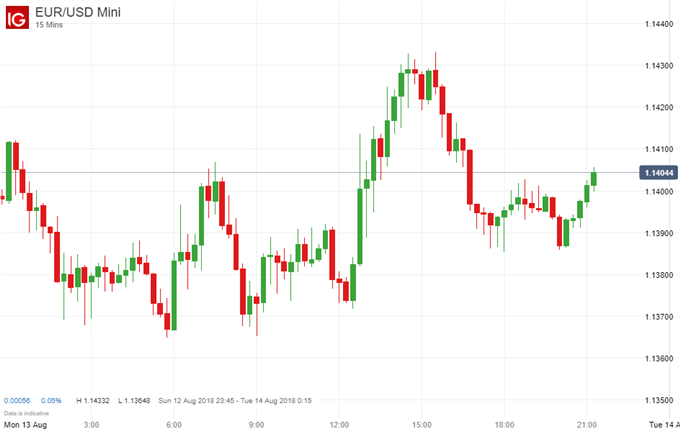 The yield on an Italian 10-year bond reached 3.109% following the lira’s depreciation, a level not seen since the political uncertainty following the March election. Spanish 10-years climbed to 1.45% and Greece’s has rebound to 4.29% despite a recent credit upgrade. The rising yields contrast the German Bund’s position as Europe’s safe haven, as the gap between Italian and German bond yields briefly reached 280 basis points. Moving forward, further comments or actions that insinuate Italy might leave the single currency system will undoubtedly impact the currency. Read the FX Week Ahead for a quick overview on this week’s important events.