Join out analysts for live coverage of all the major economic data which move the Japanese Yen at the DailyFX Webinars.

The Japanese Yen was steady Monday despite a mildly disappointing Tankan business survey from the Bank of Japan.

The large manufacturers’ confidence index slipped to 24 in the first quarter of 2018, from 25 in the previous three months. That was the first retreat for the series since the end of 2016. However, it remains extremely elevated by recent standards.

The large manufacturing outlook slipped to 20 from 21. Part of the survey looks at currency views and big manufacturers now see USD/JPY at 109.66 on average in fiscal 2018 (their previous assumption was 110.67). A BoJ official said that some firms were now more cautious in their outlook because of currency strength, but it is perhaps surprising that this was not a more pressing worry given the persistence of US Dollar weakness through the quarter.

Large non-manufacturing confidence also inched back, but smaller businesses were generally a bit more upbeatt. All up this looks like a broadly positive look at Japan inc’s business sentiment with most measures still relatively strong even where they have inched back.

There wasn’t much reaction from the Japanese Yen, although it did edge higher. Foreign exchange markets in the Asia Pacific region are probably weighed down to some extent by the Easter holiday break which affects the local centres of Hong Kong and Sydney, and which will keep trading desks thinly staffed in Frankfurt and London later. 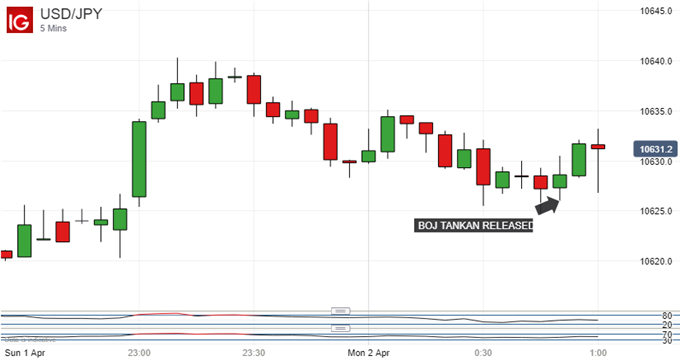 On its broader daily chart, USD/JPY remains under some pressure as it has been for most of this year. The greenback’s descent does seem to have slowed somewhat in the past couple of months but, with another upside attempt apparently having failed last week, focus remains on the downside within a broad range bordered by the lows of late March and the mid-month highs of the same month. 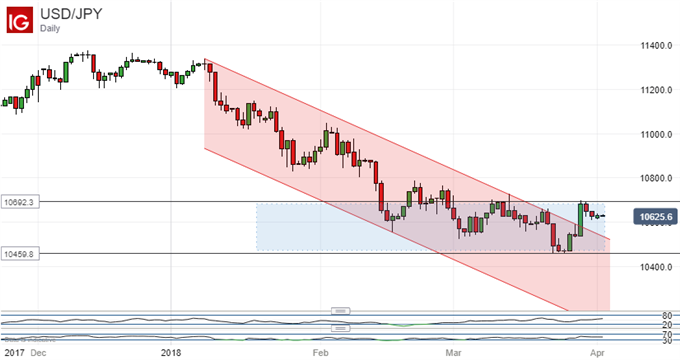