For much of 2018, in times of risk off sentiment, the USD had typically been showing signs of safe-haven attributes against its major counterparts, including that of the Japanese Yen. Alongside this, in light of the most recent sell-off in global equities since October, USDJPY had been stubbornly resilient to the bearish environment. However, factors that had been supportive for the USD have begun to ease, in respect to softening US data, which has increased concerns of a global slowdown and the Federal Reserve providing a more cautious outlook. That said, the Japanese Yen has received its allure in times of risk off as of late against the USD with December 20th posting its largest daily fall in USDJPY since January.

According to CFTC data, USD long positioning is a very much crowded trade with roughly $30bln of bullish bets, while the most bearish G10 currency is the JPY, whereby speculators have built up $10bln worth of shorts. Consequently, as the fundamental outlook deteriorates heading into 2019, USDJPY is vulnerable to a larger fallout as speculators head for the exit on their long USDJPY positions. 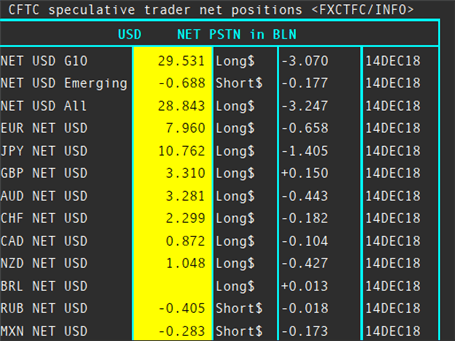 The firm break below the rising trendline has increased scope for a test of the 38.2% Fibonacci retracement situated at 109.27. Whereby failure to support the pair could allow for a run in on 105.00 in the longer term.