The lockdowns may be over, but not for orange juice.

Already America’s favorite breakfast staple along with eggs, bread and ham, orange juice won new love from commodity investors through the height of their stay-at-home as it handily beat , and to deliver double-digit gains on the year.

But with most of the country having reopened and people back at work in offices, stores or on the streets, frozen concentrated —or OJ as they’re simply known—haven’t lost a beat: they are poised to finish this week up 9%.

That makes it the market’s best week since the 12% gain in the week ended March 22—the first full week when most of the 50 US states shut non-essential businesses, parks, other public facilities and places of entertainment to practice strict social-distancing and curb the spread of the coronavirus. 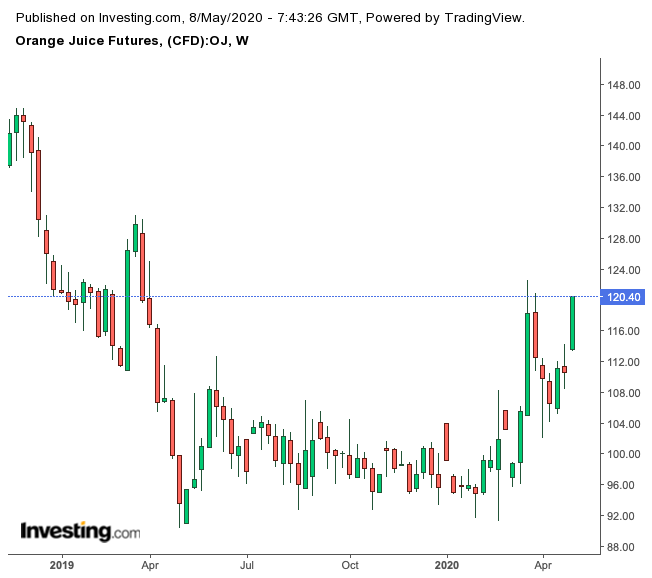 If Americans have always loved their orange juice, it shouldn’t be surprising to see the commodity continuing to rally now. Yet, that hasn’t been the case for OJ.

After a runaway 18% gain in March—its best in four years—orange juice futures suddenly lost 10% in April as supplies in warehouse freezers ran out, though those in stores didn’t. The disconnect was partly due to supply chain dislocations that had become all-too familiar during the pandemic. Unfavorable weather in top orange growing state Florida—and demand from a population that had unsurprisingly become more concerned about its health—also made it hard for farmers to keep up.

Consumption Still Up After Lockdowns

In the commodities world, typically when supply runs out on something that’s hot in demand, its prices would go through the roof. Yet, in OJ’s case in April, the speculators long on the commodity on ICE Futures US simply cashed out of their profitable March positions, triggering the price crash.

But output from Florida has improved the past two weeks and being bullish on OJ is vogue again.

“Trends are still up in the market,” Jack Scoville, analyst at Chicago’s Price Futures Group, said, commenting about OJ after it hit $119.78 per lb on Wednesday, its highest since the March peak of $1.2255—which itself was an 11-month high.

“Support is coming from the continued effects of the coronavirus that are keeping people drinking orange Juice. Demand from grocery stores has remained strong in response to the increased consumer demand. Supplies available to the market are somewhat reduced. Inventories in cold storage remain solid, so there will be OJ to meet the demand.”

So, is it worth opening new long positions in OJ?

The technical indicator has a topside resistance of $1.2352 for July OJ, which settled Thursday’s trade at $1.2040. That potentially leaves room for another 3 cent, or 2.5%, gain—although in reality it could be more. OJ is already up 24% year-to-date.

Scoville’s own max for July OJ is $1.27, meaning a 7 cent or near 6% gain.  He says his call is based on juice consumption remaining relatively high and the weather staying supportive in Florida.

Florida’s weather has been a mixed bag over the last few weeks: very hot and dry in the south, where most of its orange groves are, and wet in the north.

“The mid season oranges harvest is diminishing,” said Scoville. “Irrigation has been run several times per week in most areas. Color break is reported on late variety oranges. There are also more signs of early bloom, and new growth on trees are reported.”

According to the latest available Nielsen data, retail sales of orange juice rose 33.5% In the eight weeks ended April 18, compared with a year ago.

Orange juice consumption hit its peak in 1998, topping out at 6.1 gallons per capita, according to data from the US Department of Agriculture’s Economic Research Service. By 2017, consumers were drinking 60% less orange juice, following years of backlash given questions about its true health benefits and a wider variety of options of juices and smoothies.

The recent spike in consumption has been interpreted by analysts to mean that lockdowns incited by the coronavirus have made stay-home Americans eat fuller breakfasts—which include the typical tall glass of orange juice—versus reversing the trend of grabbing meals on the way to work.

If consumption of OJ remains high as Americans transition to a normal life, it’ll mean that whether they’re home or on the run, juice in the morning has become a must.