Loonie Flat As NAFTA Hope Is Cancelled By Oil Drop

The Canadian dollar is nearly flat on Thursday despite the U.S. dollar falling against other major pairs. Trade war fatigue has the greenback on the back foot and the was higher as NAFTA negotiations restarted yesterday. U.S. President Donald Trump on the Organization of the Petroleum Exporting Countries (OPEC) not doing enough to keep crude prices low put downward pressure on the commodity.

NAFTA talks continue today between the U.S. and Canada with both sides remain optimistic but an agreement does not seem to be in the cards in the short term. Canada is facing pressure from the U.S. and Mexico as both have political timelines that have to be met to insure a quick approval. Canadian Foreign Affairs Minister Chrysta Freeland remains committed to get the best deal for Canada and after 13 months of negotiation will not compromise for the sake of a quick deal. 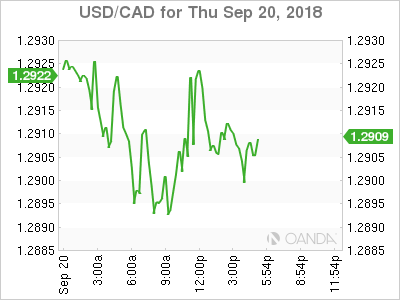 CAD traders will be tracking Canadian inflation and retail sales data that is due out tomorrow at 8:30 a.m. EDT. The is forecasted to show a monthly loss of 0.1 percent but still on track to a yearly 2.8-percent pace. are anticipated to show a more robust economy with a jump of 0.6 percent. The data will put an October rate hike by the Bank of Canada firmly on the table if it beats expectations.

NAFTA sound bites have been few and far between with only general comments. Prime Minister Justin Trudeau and Trump have been in contact throughout but there appears to be still a lot of work from both sides to reach an agreement.