Hurricane Florence has caused property damage estimated at between $17 billion and $22 billion, and thousands of homes, buildings and other structures in the Carolinas must be put up again when flood waters recede. The market, key to the reconstruction, has lost 20 percent of its value since the storm hit and is trading near 16-month lows.

Bewildered investors need to look at US-China trade war to figure out the disconnect.

The Trump Administration’s latest tariffs on $200 billion of Chinese goods, announced Monday, strikes at the heart of the US building materials industry, those in the know say, and lumber futures on the Chicago Mercantile Exchange were reflecting that over the demand for wood products envisaged for the rehabilitation works required by the storm.

“It’s the timing, more than anything else,” said Jock O’Connell, trade economist at Beacon Economics, a California-based think-tank.

The latest US tariffs on China slap a 10 percent duty on various types of plywood as well as on oak, beech, maple, ash and cherry, moldings, particleboard and whole door products. The United States’ wood supply largely comes from Canada, making some of those duties symbolic. But the US list also cover things like Chinese-made vinyl flooring and wall covering, home furnishings that include furniture, lamps and rugs, as well as appliances such as televisions and vacuum cleaners.

“Even if your house had structurally survived the storm, you’re going to need some of these things to restore it to the way it was,” O’Connell said.

With the US already enforcing tariffs on Canadian wood, demand for lumber had been stagnating due to rising costs, he said. “The fact that the hurricane could cause a surge in demand later in the year for paneling, framing and other woodworks doesn’t necessarily make a price gouge in lumber seem right at this moment,” O’Connell said. “That’s what’s causing this selloff.”

Since February, the US has imposed antidumping and anti-subsidy duties of 20 percent or more on Canadian softwoods such as pine, spruce and fir. Investors in CME lumber at first reacted well to the tariffs, which initially sent US home prices soaring. But softer since July caused a 30 percent tumble in lumber futures by the end of August, from June’s highs.

The rout resumed last week, with a 3 percent drop on Friday that extended to Monday’s 14% slump, before another 4 percent decline on Tuesday.

The intraday bottom of $348.10 struck on Tuesday by the November lumber contract on CME marks the exchange’s lowest price for a thousand foot board (mfb) of wood since May 2017. 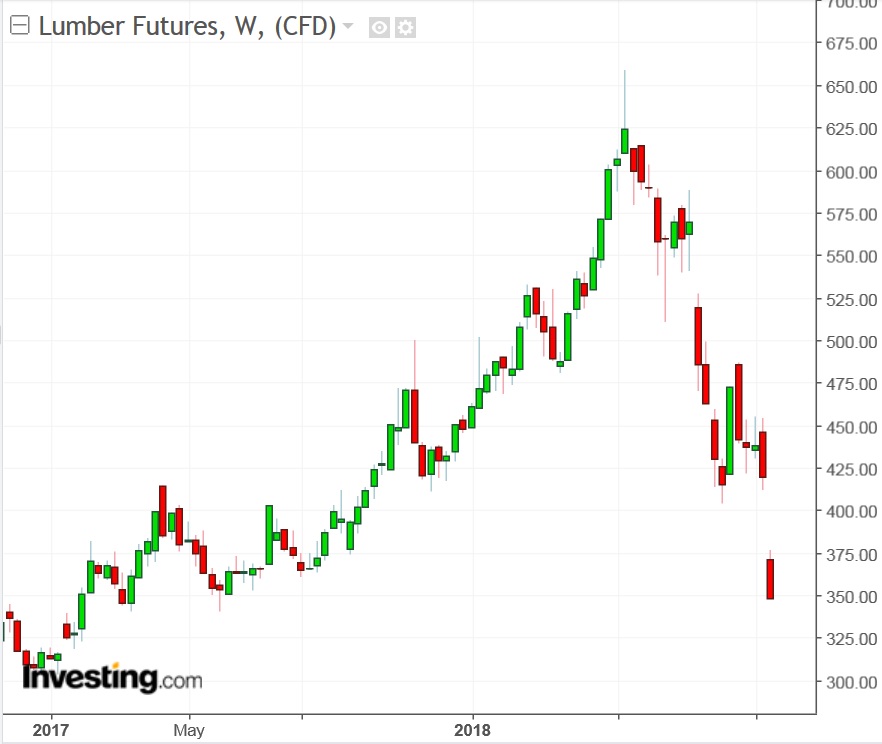 Lumber Futures Weekly Chart from May 2017 to Present

Investing.com’s daily technical outlook has a “Strong Sell” recommendation for the November contract, with no meaningful strong support.

“Given the timing of this hurricane, rebuilding has to happen in the Carolinas before winter sets in,” O’Connell said. “But there’s no certainty whether there’ll be a trade deal between Canada and the US by then, to at least make wood supplies more affordable.”

A gauge of , run by National Association of Homebuilders, remained unchanged in September as lumber prices slipped from record levels seen over the summer. Last week, the association warned that tariffs on steel imports and Canadian lumber shipments into the US were “needlessly increasing the cost of building materials and exacerbating the housing affordability crisis”.

“Markets hate uncertainty and if the tariff situation is not resolved quickly, you can see lumber prices go even lower in the near term,” said Adam Sarhan, founder and CEO of New York-based global capital markets fund 50 Park Investments.

Sarhan said trade wars aside, something else was weighing on lumber prices: Trump’s inaction on infrastructure.

“Infrastructure was supposed to be a big part of Trump’s legislation but it has gone quiet. And lumber was a key piece in that infrastructure play. So, until we get some news on infrastructure, lumber prices are going to be under pressure,” said Sarhan.

While Trump has floated a $500 billion idea to replace America’s crumbling infrastructure and employ large numbers of people in the process, critics say all they’ve seen and heard was his oft-repeated election pledge to build a wall on the US-Mexico border – a promise that itself remained unfulfilled.

Trump defended his trade wars in a series of tweets on Monday, saying domestic price hikes have “thus far been almost unnoticeable” and “put the U.S. in a very strong negotiating position.”

Canadian Prime Minister Justin Trudeau, meanwhile, is under pressure from his country’s business and political leaders to agree to a new North American Free Trade Agreement with the US and Mexico, Reuters reported on Tuesday. Washington announced a bilateral trade deal last month with Mexico City that effectively left Ottawa out their 25-year trade pact. Trudeau has insisted that Canada was better off without a deal than a badly reshaped NAFTA.

But even if the US-Sino trade war drags on and there is no deal with Canada in sight, lumber prices could begin rising by late autumn from rebuilding activity in the Carolinas.

“When everybody walks into the market and says ‘I need lumber, I need steel, I need drywall’, those prices are going to rise. If you still have tariffs on those goods at that time, they are only going to make them more expensive,” said O’ Connell.

Michael Carpenter, executive vice president of the North Carolina Home Builders Association, shared that sentiment in an interview published on Monday. “There are going to be some significant shortages of building materials for some time,” he said.