The steepest Canadian oil discount on record has been making headlines, notably weighing down on Alberta’s credit spreads. Combined with increasing oil sands production, the late August Trans Mountain pipeline legal setback will lengthen the period during which Canadian oil will be sold at a sizeable discount to WTI. This being said, last week’s situation, leading to a record-high discount of US$50 per barrel of Western Canadian Select (WSC), is unlikely to persist as it was mainly due to a combination of temporary factors.

While transportation constraints will continue to weigh on WCS, the coming back online of U.S. refining capacity and the Edmonton Sturgeon refinery operating at full capacity in the near future should alleviate pressure on all Canadian benchmarks, including the light, upgraded synthetic and condensate streams. Before year-end, we expect the WCS-WTI spread to trade between $US20 and $US30.

On the fiscal side, the conservative assumption made by the Alberta Ministry of Finance for the WTI, the WCS-WTI spread and the Canadian dollar will help the province to go through this difficult period without any major fiscal incident. If we take the worst-case scenario that a US$50 record-high discount per barrel will persist until year-end, according to our calculations, the deficit for FY 2018-19 would worsen by about $3 billion. Such a deterioration added to the $7.8-billion deficit estimate included in the August quarterly update would imply a $10.8-billion shortfall, moderately worse than the $8.8-billion deficit originally penciled in the 2018 March budget. Beyond FY 2018-19, the negative impact from larger-than-expected WCS-WTI discount will largely be offset by a softer Canadian dollar and stronger-than-expected prices.

From a credit perspective, Alberta’s 10-Year benchmark spread relative to Ontario deteriorated by 3.1 basis points (6 versus Canada) since the last business day of September, reflecting concerns about the fiscal impact of lower oil prices. However, with oil spreads expected to narrow somewhat in the near-to-medium term, so should Alberta’s spreads. 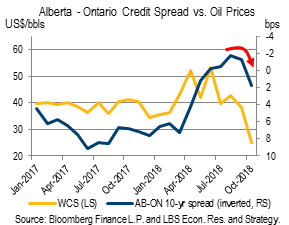