Just when you though it was safe to invest in an asset that made sense – be it forex, bonds or stocks – fear and contagion has suddenly appeared, and in less than 48 hours has severely bullied emerging markets into near submission.

In six weeks, the Turkish lira has fallen nearly 45% against the U.S. dollar, when President Erdogan won an election strengthening his absolute power. Today alone, TRY has fallen 11% to hit a record low of $7.2412 outright, as concerns grow about strained relations between Turkey and the U.S. as well as about the worsening state of the Turkish economy.

Reports that the European Central Bank (ECB) is becoming increasingly concerned about the exposure of some banks in the region has sent the EUR to a new one-year low of €1.1367.

News that investors are losing confidence that Turkey will act in the interests of the economy has many flocking to own USDs, a natural reaction. However, a stronger dollar will eventually hurt the U.S. economy, from an export perspective in particular. Nor does it help President Donald Trump’s agenda of growth through trade and stimulus through a weaker greenback.

Central Bank of the Republic of Turkey (CBRT) overnight said it had lowered reserve requirement ratios for banks to free up liquidity and assured markets that it would take all necessary measures to maintain financial stability. Turkish Finance Minister Berat Albayrak also said the banking watchdog had also limited swap transactions in the currency.

On tap: There are no central bank meetings this week. Q2 growth data for the Eurozone and Germany will be released (Aug. 16). Stateside, the pace of new data in the U.S. picks up with industrial production (Aug. 15) and housing starts (Aug. 16). The U.K. posts key data including employment (Aug. 14), consumer and producer price indexes (Aug. 15) and retail sales (Aug. 16) and Brexit talks between the E.U. and the U.K. resume in Brussels (Aug. 16).

In Japan, the tumbled 2% to a five-week low overnight as a sell-off in emerging market currencies frightened investors, with the safe-haven yen’s (¥110.20) appreciation also hurting sentiment. The broader dropped 2.1%.

Down-under, shares ended lower overnight, weighed down by materials and banks after the crisis in Turkey hit Asian assets, while global trade turmoil pushed commodity prices lower. The fell 0.4%. In South Korea, the ended down 1.5%, in line with other Asian countries.

In Hong Kong, the ended 1.5% down, while the closed 1.6% lower. In China, stocks too ended lower overnight, but managed to recoup most of their earlier losses aided by gains in shares of tech firms. The blue-chip index fell 0.4%, while the ended down 0.3%.

In Europe, regional bourses opened lower and continue the trend as the session progresses. 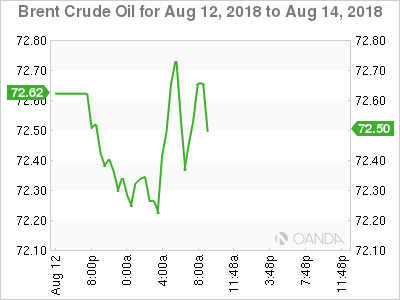 Oil prices have slipped overnight as trade tensions and troubled emerging markets have knocked the market outlook for fuel demand, despite U.S. sanctions against Iran pointing towards tighter supply conditions.

Contagion fears in emerging markets is compounding worries that a deepening trade war between the U.S., China and the E.U. will hurt business activity in the world’s biggest economies.

Also putting pressure on oil prices were U.S. energy companies last week increasing their number of active oil rigs by the most since May, adding 10 rigs to bring the total count to 869, according to the Baker Hughes. That was the highest level of drilling activity in three years. 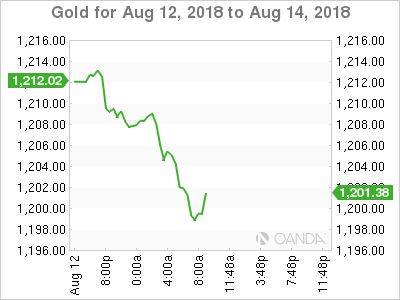 Turkish government bond yields again have backed up aggressively overnight despite the CBRT announcement of a set of measures to support the TRY. Yields on the Turkish 10-year government bond hit a new record high 8.914% this morning. They fell briefly to 8.427% after the central bank announcement.

Elsewhere in Europe, Italian bonds and stocks have also been hit by the turmoil in Turkey. Italian banks in particular have a lot of exposure in Turkey. Consequently, investors continued to push Italy’s borrowing costs higher, with yields across the curve 3 to 11bps higher. 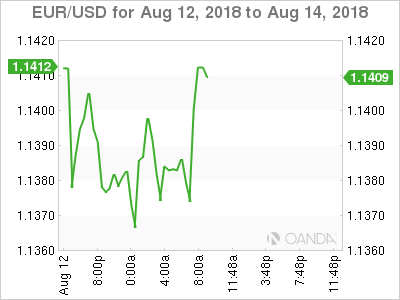 4. Dollar in demand on contagion fears

TRY ($6.8794) has pared some of its losses outright after the CBRT said it had lowered the reserve requirement ratios for banks as well as pledged to “provide whatever liquidity banks needed and to take all necessary measures to maintain financial stability.” The currency is still down more than 6% on the day and within touching distance of a record low around $7.24 hit it early Asian trade. The lira has weakened nearly 45% since the start of the year.

(€1.1384) remains below the key technical level of €1.15. The Italian budget issue continues to simmer in the background – Italy Deputy PM Di Maio believes that Italy is not at risk of financial market attack. 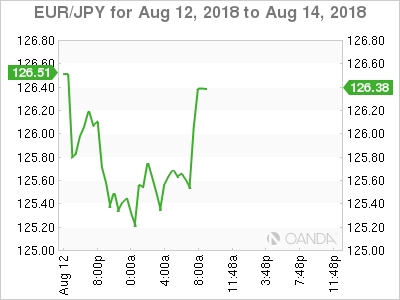 Faced with sluggish domestic demand and potential pressure from a trade war with the U.S., Chinese policy-makers have recently boosted policy support and softened their stance on deleveraging.

According to China’s banking and insurance regulator (CBIR) China extended +¥1.45T (+$210.84B) in new yuan loans in July – a form of pumping liquidity into a slowing economy.

However, the PBoC continues to faces difficulty in channelling credit to small firms – which are vital for economic growth and job creation. State banks remain reluctant to lend to these small firms, which are considered riskier than state-controlled ones. 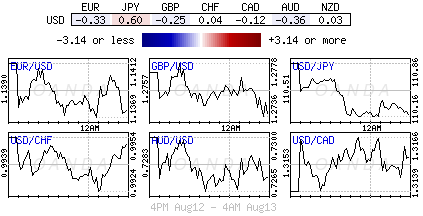