The risk of trade protectionism threatening the broad-based global economic momentum is undeniably front and center. Still, market participants will take a close look at the Canadian and U.S. job reports on Friday morning in order to project the potential behaviour of the Bank of Canada and the Fed over the next couple of months.

Canadian Labour Force Survey: In February, the 6-month moving average in monthly job creation dipped a notch below 20K (+19K) for the first time since September 2016. We expect a solid rebound in total employment in March (+30K; consensus: +20K). Our call is based on a reversal of the 39K decline in full-time positions observed in February. This pullback in full-time employment is difficult to explain since companies have more difficulties to find staff according to various surveys. We doubt Canadian firms are delaying hiring because of the return of market volatility and increasing trade tensions. Also, with firms having difficulties to fill the 300K+ job vacancies across the country, additional workers are likely to move from a part-time to full-time status. Thus, even if the March total job creation number comes in below our expectation, the quality of job creation is likely to please market participants.

Moreover, part-time employment is less likely to rebound; partly for the reason given above but also as half of the 82K decline observed so far this year occurred in Ontario where several companies are adjusting to the minimum-wage increase. The minimum-wage increase mostly affected temporary workers as SMEs try to absorb the cost of the increase (the raw data available shows a larger-than-usual 164K decline in the number of temporary employees so far this year).

Finally, another key number to watch for in the LFS report will be the March data point for the average hourly earnings (AHE) of all employees. On a year-over-year basis, AHE averaged a two-year high of 3.2% during the first two months of 2018. This solid pace of growth in wages is expected to continue since Canada’s unemployment rate stands at a 4-decade low of 5.8%. A sustained solid increase in wages will facilitate the removal of further monetary stimulus in the medium-term. In the short-run, however, a policy rate hike from the Bank of Canada is still unlikely to occur even if there is a preliminary NAFTA deal by mid-April. In our view, it is still preferable for Governor Stephen Poloz to heavily lean against the threat of intensifying U.S.-China trade and the probability that the preliminary NAFTA deal could fall apart later in 2018. After all, the U.S. Congress will require at least 6 months to approve the final trade deal which will only be inked later this year. By that time, both the Mexican presidential elections as well as the U.S. mid-terms risk having changed the composition of Congress in both Mexico and the U.S.

U.S. Non-Farm Payrolls: Since Fed Chair Jerome Powell is unlikely to let the U.S. economy move into overheating territory, markets will particularly pay attention to the March AHE number (consensus at 2.7%). The pace of wage growth for American workers unexpectedly cooled in February to 2.6% year-over-year after rising at the fastest pace in almost a decade in January (2.9%). With the U.S. economy further advancing in the economic cycle and retiring baby boomers exacerbating labour shortages, wage growth is more likely to accelerate than decelerate. Finally, the U.S. economy added 313,000 jobs in February, the highest monthly net job creation since mid-2016. Market participants expect job creation to remain above labour force growth in March for the sixth consecutive month (consensus at +175K). 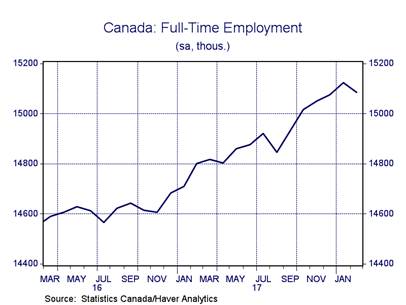 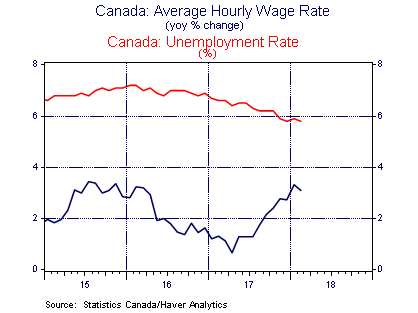