For the first time in Mexico’s modern history, a radical left-wing candidate has won election to the nation’s highest office, the Presidency, bringing an end to decades of right/center right rule. The victor is Andrés Manuel López Obrador, a 64-year old activist from a poor background, who made his name some decades ago by threatening the national electricity company with direct extralegal action in retaliation against perceived price gouging. He joined Mexico’s main leftist party in 1989, becoming its leader in 1994 and winning the mayoralty of Mexico City, before forming a new party only four years ago, MORENA.

Obrador’s victory is seen as an emphatic mandate for change by Mexicans, who are sick and tired of endemic violence, corruption, and a real sense that the country has gone backwards in some crucial areas during recent decades of neoliberal economic policies. While the northern part of the country and the upper-middle class have prospered, life has become tougher and less secure for the less-well off, particularly the agrarian sector. Externally, NAFTA, the Trump presidency, and relatively low crude oil prices have called into question whether the foundations of modern Mexican economic policy have begun to crumble. This combination of external and internal crises suggests that the country is now at a crossroads, and the new President’s actions in office may now play a decisive role.

Some Mexicans, especially the better-off, fear that the President will follow the model of Chavez’ Venezuela, ushering in a chaotic and economically devastating national collapse. Although he is perceived as a left-wing, economically populist nationalist, he has promised to neither raise taxes nor government debt, although few serious minds believe this is a realistic course of action for him. He has proposed the use of amnesties for drug traffickers as part of a broad approach to reduce violence, and this policy has also been controversial.

Mexico will now begin an interesting time, as its politics enters uncharted waters. Such uncertainty tends to produce volatility, and the Mexican Peso has been showing plenty of that ever since 2016, when candidate Donald Trump emerged on the American political stage. Trump’s economic and immigration policies have impacted Mexico and, most analysts would agree, contributed to the slide in the value of the Mexican Peso, as the monthly USD/MXN price chart below shows. The imposition of tariffs on Mexican imports is a live issue. 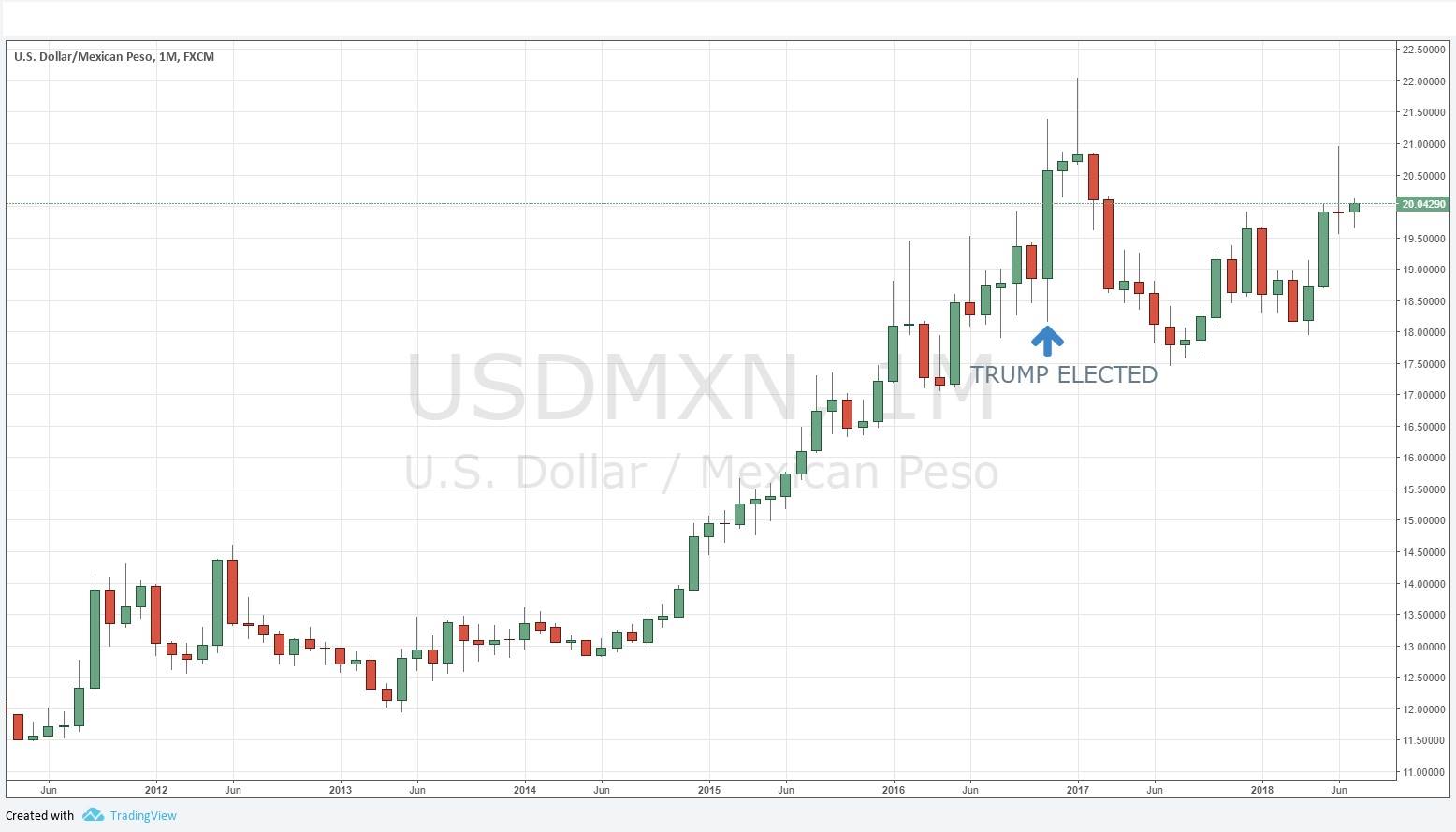 It is notable that the performance of the Mexican Peso has been mixed in the recent hours since the result of the 2018 Presidential election became clear. While it might be expected that the election would be negative for the Peso, although the Mexican currency has fallen since the result, it has not moved in a particularly unusual way, and remains below last week’s high price as at the time of writing. The hourly chart below shows the rise of recent hours is nothing exceptional. 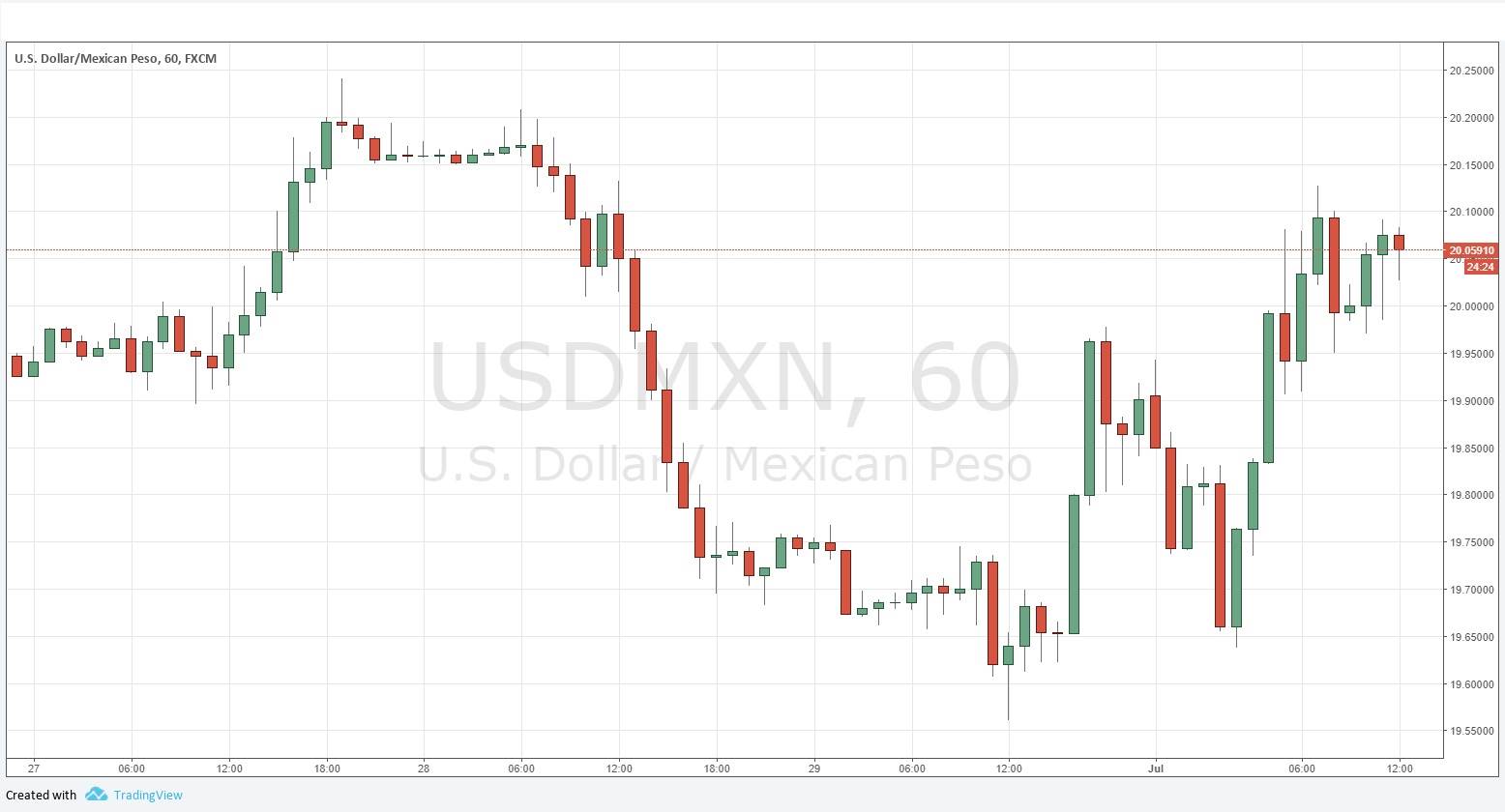 The fact that the price is trading close to a very important psychological level at 20.00 may also be playing a technical role in stemming any immediate rise, although major political events can usually reliably trump support and resistance levels!

The evidence suggests that the markets are undecided as to the likely impact of the new Mexican Presidency. As with President Trump, it may be that the elevation of a complete outsider to power on a wave of populist revolt might trigger some surprising results, such as the emerging détente with North Korea. Mexico now has the momentum to potentially correct the failures of the past, but the market will watch carefully before determining whether the result is more likely to produce a fairer and more efficient Mexico, or another Venezuela. In the meantime, expect the Mexican Peso to swing up and down until the verdict arrives.