See our quarterly gold forecast to learn what will drive prices through mid-year!

Gold prices saw a relatively choppy week with the precious metal hitting lows of $1211 before retracing back towards $1230, which in turn saw the precious metal close flat for the week. Much of the bounce back in gold had been led by the gains seen in the Chinese Yuan, which has become increasingly influential on the price action seen in the precious metal. As such, with gold in Chinese terms consolidating at its elevated levels and thus lacking signs of an imminent breakout. The view for the upcoming for Gold is neutral.

US Mid-Term Elections and Federal Reserve on the Agenda

As we look ahead for the upcoming week, much of the focus will be placed on the US political front with the mid-term elections. Given recent polling data and historical performance, there is an increased risk that President Trump and Republican party could lose the Lower House in Congress to the Democratic party, which could in effect lead to a political gridlock in Washington. This could see the USD slip and equity markets slips with Trump potentially facing increased hurdles to pass through his domestic agenda and thus the initial reaction to this outcome could be a bid in Gold prices.

However, gold prices could be tempered by the upcoming Federal Reserve monetary policy. While it is not expected that the Fed will raise rates (Expected to hike rates in December). The Federal Reserve could continue to signal an upbeat assessment on the US economy, advocating the case for further rates hikes, consequently weighing on the precious metal. 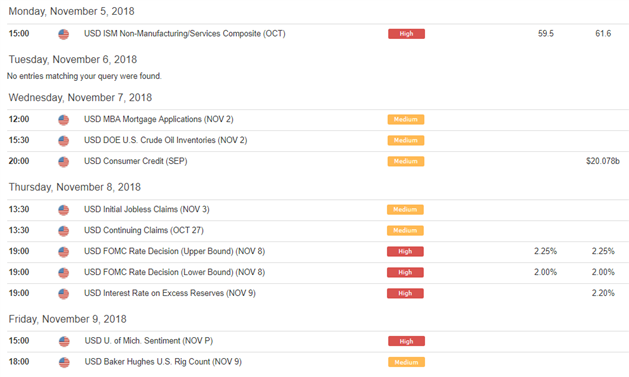 $1240 remains the stumbling block for gold bulls with prices failing to make a firm break above this level. A close above could open up room towards the July 9th swing high ($1265). On the downside, a cluster of DMAs (50 and 100) coinciding with the 23.6% Fibonacci Retracement (drop from $1365 to $1160) offers firm support for prices.

British Pound Forecast – Sterling’s Rally May Have More Room, All Things Being Equal