In Asian overnight, stocks early gains were eroded, led by declines in Hong Kong and China over worries about the HKD.

In Japan, equities rallied modestly on relief that a U.S.-led missile strike on Syria appeared to be a one-off event. Nevertheless, ongoing concerns about a trade war had investors seeking defensive shares. The rose 0.26%, while the broader gained 0.40%.

Down-under, shares pared earlier gains to finish higher overnight, with strength in commodities countered by a fall in financials. The rose 0.2%. In Korea, the closed 0.1% higher.

In Hong Kong, shares dropped amid worries that slowing credit growth and tightening regulatory requirements in China will hurt economic growth. The fell 1.6%, while the lost 2.1%.

In China, indexes fell and posted their worst day in three-weeks, on slowing credit growth. The blue-chip index ended down 1.6%, while the slid 1.5%.

Note: The People’s Bank of China (PBoC) raised the Open Market Operation (OMO) interest rate on the 14-day reverse repo by +5bps to +2.70%.

In Europe, regional indices trade little changed in a lackluster session ahead of corporate earnings. 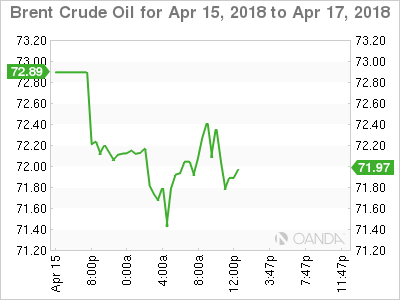 Oil prices are under pressure ahead of the U.S. open after data showed that U.S. drilling activity rose and fears waned about escalating tensions in the Middle East.

data on Friday showed that U.S. drilling companies added seven rigs in the week to April 13, bringing the total to 815, the highest in three years.

Ahead of the U.S. open, gold prices are little changed as overnight markets assess the possible consequences of a U.S.-led missile strike against Syria over the weekend. is down -0.1% at +$1,344.03 an ounce. 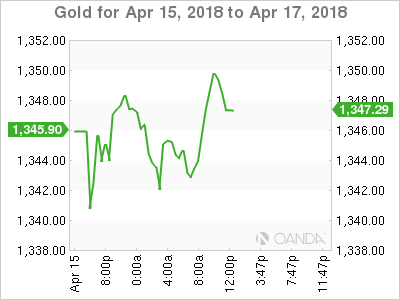 Also supporting higher U.S. yields is the FOMC minutes last week showing officials leaning towards a slightly faster pace of tightening at their March meeting as their growth outlook and confidence in hitting inflation targets strengthened.

Yields on both German and U.S. 10-year government bonds are both at their highest level in four weeks. 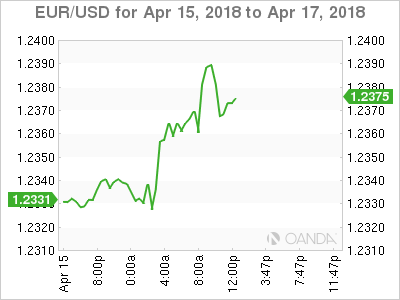 Nevertheless, with the U.S. pushing its twin deficits up while also increasing interest rates, dollar bears continue to look for selling opportunities.

The U.S. Treasury’s bi-annual report on FX policies of G20 trading partners delivered a relatively “measured” tone and did not name any country as a currency manipulator. Even the weekend military strikes on Syria saw limited price action.

(1.4303) trades atop of the euro session high and has penetrated the strong psychological resistance level of £1.4300. Expect investors to focus on the E.U./U.K. meeting to discuss post-Brexit trading relationship during the week.

(¥107.08) is holding above the key ¥107 level. Techies are looking for the yen to remain susceptible to further weakness ahead of next week’s BoJ meeting and PM Abe’s falling approval numbers. 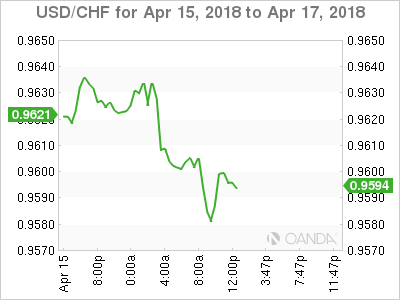 The combined producer and import price index fell 0.2% in March versus February. On an annual basis, the index was up 2%.

Digging deeper, annual consumer price inflation (CPI) is running at 0.8%, which would suggest that the Swiss National Bank (SNB) should be in any hurry to tighten interest rates in the coming months. 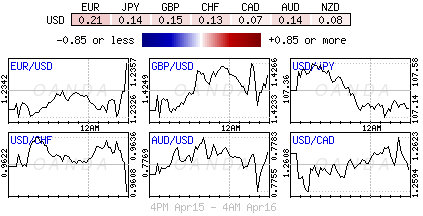