This week, the Fed and the European Central Bank (ECB) release minutes of their latest meetings, and China reports import, export (Friday) and inflation data (Tuesday/Wednesday).

China’s consumer inflation likely retreated in March from a more than four-year high in February as the Lunar New Year holiday effects waned. The market expects CPI to rise by about +2.6% in March y/y, compared with February’s +2.9%. The country’s PPI probably rose about +3.2%, easing from February’s +3.7%.

On Thursday, the Bank of Mexico releases a policy statement on the heels of a strengthening MXN – in late March, the peso was the best amongst the G20 pairs. In its last policy statement, the bank left the door ajar for an additional rate increase. The ECB will release minutes of its March 7-8 meeting, when it signalled a shift toward tighter monetary policy by dropping a long-held pledge to accelerate its bond-buying program if the region’s economy deteriorates.

Note: Attention now turns to China’s Boao Forum (Tuesday), where President Xi is among senior officials scheduled to speak. Markets waits for any reference to trade.

1. Stocks in the black

Despite continued sabre-rattling on trade over the weekend between Washington and Beijing, Asia and Europe’s major bourses rallied again overnight as we head into Q1’s U.S. earnings season.

In Japan, stocks recovered from the previous session’s drop and edged a tad higher, lifted by defensive shares. Despite ongoing concerns about an U.S./China trade spat, a rise in U.S. stock futures has helped calm sentiment for now. The ended the day up 0.5%, while the broader rallied 0.35%.

Down-under, stocks rallied on Monday, with the health care sector and consumer staples helping to cool nervousness over an escalating U.S./China trade spat. The gained 0.4%, its third gain in four sessions. It was little changed on Friday. In South Korea, the was up 0.6%.

In Hong Kong, stocks rallied on hopes that the U.S. and China can reach a deal to avoid trade war. The rose 1.3%, while the gained 0.9%.

In China, stocks were tepid as investors pondered global trade developments. At the close, the index was up 0.3%, while the blue-chip CSI300 index was down 0.1%.

In Europe, regional indices trade higher across the board extending its two-week rally as worries over a potential global trade war fade.

Oil markets have steadied ahead of the U.S. open after slumping around 2% last Friday on concerns over a Sino/U.S. trade dispute, as well as increased U.S. drilling activity.

Investors are also eyeing the situation in Syria after reports – denied by the U.S. – that U.S. forces had struck a major air base there.

Stateside, on Friday showed that drillers added 11 rigs looking for new production in the week to April 6, bringing the total count to 808, the highest level since March 2015.

Gold prices are little changed ahead of the U.S. open as the market awaits for any new developments on the simmering trade spat between the U.S. and China. is steady at +$1,332.75 an ounce. 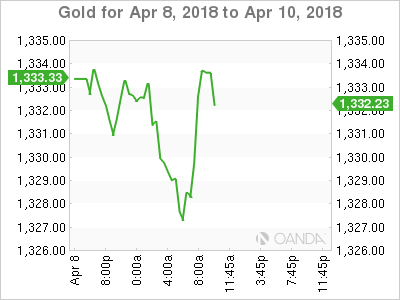 Sovereign yields are expected to trade in a tight range as you go out the curve.

Yields continue to hover atop of their recent levels as investors are less anxious to sell amid heightened macro uncertainty and are reluctant to buy as Fed and ECB stay broadly on course.

With Trump having raised the stakes in the trade stand-off, the near-term upside in 10-year Treasuries, Bunds and Gilts yields seems even more capped. 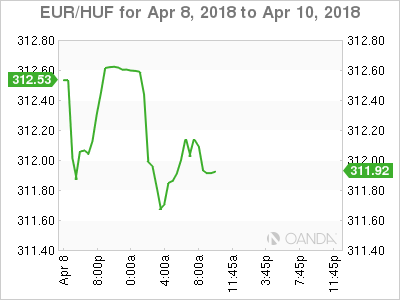 The ‘mighty’ USD has maintained a firm tone ahead of the open stateside as the global trade concerns continued to simmer. The buck is looking to continue its gains for the second consecutive week with market concerns over trade continuing to pivot from NAFTA to China.

Consensus expects the EUR to trade within its €1.22 to €1.25 range for the medium term. On Wednesday, U.S. is expected to show an uptick in core inflation, but the base effect is not expected to provide enough support to the USD to drive EUR/USD sustainably below current levels. 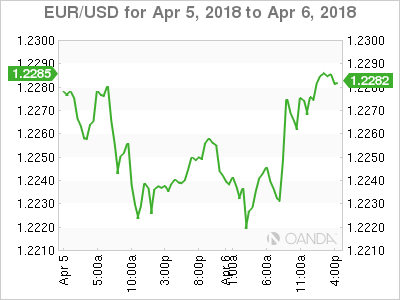 Data from the think tank Sentix this morning showed that Eurozone investor confidence declined notably in last month on fears of trade war.

The investor sentiment index fell to 19.6 in April from 24.0 in March. Market expectations for the score were forecast to remain unchanged at 24.0.

The third consecutive decline was due to a significant deterioration in economic expectations.

The expectations index turned negative for the first time in nearly 24 months. The score was -1.5 vs. 4.3 in March.

Data showed that the investor confidence index for Germany declined to 24.4 in April from 29.1 in March. 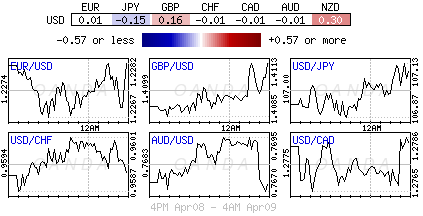