With “risk-on and -off” trading strategies dominating proceedings this summer, expect this to be another action-packed week despite the lack of economic data releases.

A stronger U.S. dollar and higher interest rates are pushing emerging market economies into ‘bear’ territory and their respective currency pairs have seen extreme volatility, even in presence of the own central banks – TRY, RUB, IDR, INR.

Lower-level officials from China will meet in Washington (Aug 21/22) and try and work toward a solution to their escalating trade conflict between the world’s two largest economies.

In Europe, investors are beginning to set their sights on Italy, as politics and budget concerns have EUR ‘bulls’ worried.

Due to the emergingnmarket meltdown and weaker domestic fundamentals, the Chinese yuan is threatening to trade through the psychological key ¥7 handle for the first time in a decade. Expect the People’s Bank of China (PBoC) to defend any further yuan weakness, especially through the trade talks.

Fed Chair Jerome Powell is scheduled to speak on Friday, Aug. 24, at the annual global central bank conference in Jackson Hole. He will speak on “monetary policy in a changing economy.”

Contagion worries continue to have an impact on investor risk sentiment, especially in emerging markets.

Overnight, there were advances across most Asian equities, although Japanese stocks bucked the upward trend. The fell as tech stocks weakened, while trading was thin as investors’ awaited developments from trade talks expected between the U.S. and China this week. The Nikkei share average dropped 0.3%, while the broader declined 0.3% in the lowest traded volume in four months.

Down-under, stocks edged a tad higher, as cautious outlook from retailers offset gains from materials stocks, which were supported by upcoming U.S.-Sino trade talks. The added 0.1% after recording a 0.2% gain on Friday. In South Korea, the stock index gained 0.4% and the won edged higher overnight on improved investor sentiment.

In Hong Kong, stocks rebounded overnight, led by IT and resources shares, as a stabilizing yuan (¥6.8446) improved risk appetite. The rose 1.4%, while the gained 1.1%.

In China, stocks recovered from a 30-month low to close higher on Monday after a report that China’s securities regulators (CSRC) summoned brokerage analysts for views on the market improved investor sentiment. The index ended up 1.1%, while the blue-chip index ended 1.17% higher.

In Europe, regional bourses trade higher across the board, tracking a stronger Asian session and U.S. futures. 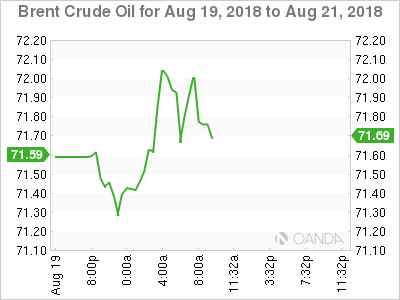 prices stabilize atop of $72 per barrel overnight after several weeks of decline, weighed down by concerns over slowing global economic growth but supported by an expected fall in supply from Iran due to U.S. sanctions.

Note: Last week, Brent declined for a third consecutive week, while WTI fell for a seventh week due to concerns about a slowdown in economic growth.

Expect investors to take their cue from this weeks trade Sino-U.S. trade talks in Washington (Aug 21/22). 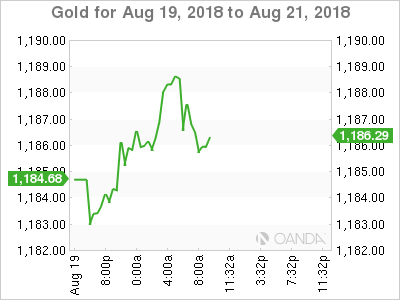 Moody’s cut its rating on Turkey to ‘Ba2’ from ‘Ba3’ and changed the outlook to negative, citing the continuing weakening of Turkey’s public institutions and the related lower predictability of Turkish policy making.

S&P cut Turkey to ‘B+’ from ‘BB-‘ with stable outlook, pointing to the substantial weakening of the lira ($6.1168) with its negative fiscal implications and strain of corporate balance sheets.

Note: Due to a religious holiday, markets are closed in Turkey this week, which will reduce liquidity and could amplify TRY volatility. 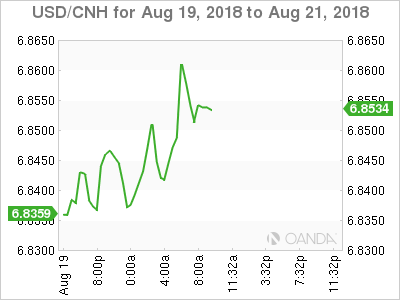 The currency crisis in Turkey and trade talks between the U.S. and China this week will dictate currency price moves.

Overnight, (€1.1406) is a tad softer by 0.3% and holding above the psychological €1.14 handle. The Italian budget remains in focus with reports that Italy would launch a €50-billion infrastructure plan next month. If so, this would blow out E.U. budget-deficit rules. The €1.15 area remains the key resistance.

($6.1168) is higher by over 1% after last week’s sovereign downgrades by Moody’s and S&P Global Ratings on Turkey. Analysts consensus sees TRY weakening towards $8.0 area before reaching the pain threshold that would likely compel President Erdogan to compromise on some of his strategic objectives.

The pending resumption of U.S.-China trade talks has prompted the market to speculate whether the U.S. could pressure China to take measures to keep the yuan from falling further. The Chinese yuan remains under pressure and is threatening to trade through the psychological key ¥7 handle for the first time in a decade. The has lost around 10% in the last five months, with trade tensions adding to worries about a slowing economy – Chinese fixed asset investment, industrial output and retail sales data last week were all on the soft side. 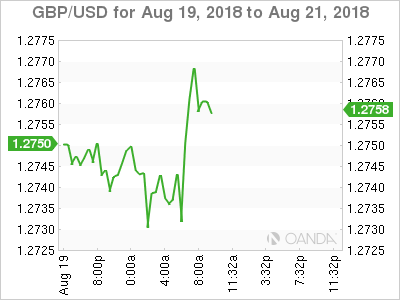 U.K. data Sunday showed that domestic house prices dropped 2.3% in August from July, as new sellers launched a “late summer sale” to try and find a buyer more quickly, according to figures released by Rightmove.

The decline was steeper than the 2.1% drop seen in August last year, with the more subdued London market and the South East weighing on the national average.

Digging deeper, in London, the price of property coming to market was down 3.1% on the month in August, resulting in an annual rate of decrease of 1.2%. In the South East, prices were down 2.3% on the month and up 0.6% on the year. Ex- those two regions, the rest of the country saw a monthly decline of 1.5%. 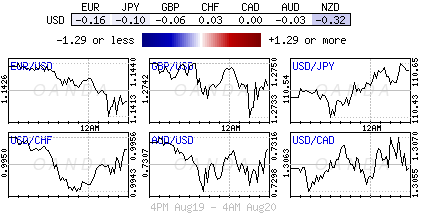