Equities are small better bid in the euro session following a mixed session in Asia that sees a holiday shorten trading week in Japan.

In the U.K., Prime Minister Theresa May is seeking more time to renegotiate Brexit talks, while stateside, another U.S. government shutdown over funding remains very much on the agenda.

and gold are a tad softer on a stronger greenback while sovereign yields are little changed.

Note: Japan was closed for a national holiday.

Down-under, stocks retreated overnight, as a rally in resource stocks was offset by declines in financials and healthcare equities. The closed down 0.2%, while in South Korea, the index closed 0.17% higher.

In China, regional bourses played catch-up after a week-long Lunar New Year holiday break. Gains came as the commerce ministry indicated that retail earnings during holiday season would increase by 8.5% y/y, and this despite domestic growth being under pressure. At the close, China’s blue-chip index rallied 1.6%, while Shanghai’s composite climbed 1.2%.

In Europe, regional bourses trade higher across the board after a flat close stateside on Friday and a mixed session in Asia. 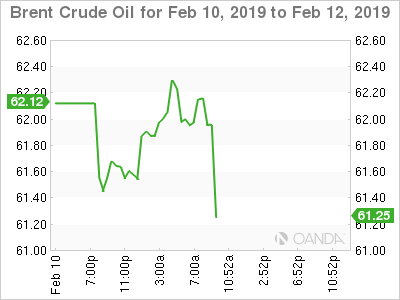 Oil prices are starting the week under pressure as data Friday showed that drilling activity in the U.S. picked up and a refinery fire stateside (in Illinois on Sunday) has resulted in the shutdown of a large crude distillation unit. Also, global growth worries are also helping to curb fuel demand.

In the U.S., Baker Hughes data Friday showed that energy firms last week increased the number of oil rigs operating for the second time in three weeks. Companies added seven oil rigs in the week to Feb. 8, bringing the total count to 854 – this would suggest an increased rise in U.S. crude production.

And another factor weighing on oil prices this month has been a stronger U.S. dollar.

Ahead of the U.S. open, gold prices are little changed, supported mostly by uncertainties around the Sino-U.S. trade war and concerns of slowing global economic growth, while a strong U.S. dollar weighs on the ‘yellow’ metal. is steady at $1,308 per ounce, while U.S. are also firm at $1,312 per ounce. 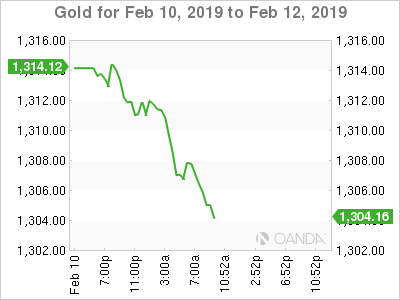 Safe-haven government bonds have benefited the most on growing investor anxiety over the global outlook, with German and Japanese debt yields falling to their lowest in over two years.

Despite weaker eurozone growth data and inflation the prospect of another U.S. government shutdown and continuing Brexit discussions are also weighing on investors risk appetite.

Elsewhere, the yield on U.S. 10-year Treasuries has backed up 1 bps to 2.64%, the first advance in a week, while in Italy the 10-year BTP yield has gained 2 bps to 2.983%, hitting the highest in two months with its fifth consecutive advance. 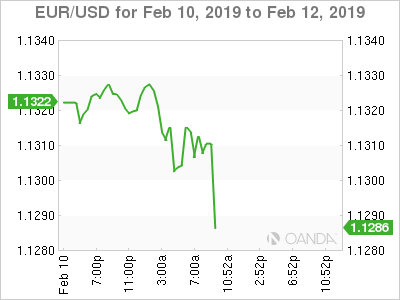 is softer by 0.3% at £1.2897 with the continued Brexit issues remaining ‘front and centre.’ The market expects PM Theresa May to request more time before she puts her deal to a fresh vote in Parliament while she has more talks with the E.U. The pound has also come under pressure from this morning’s weaker U.K data – Q3 preliminary GDP, Dec. production data and Dec. trade balances all missing expectations.

Note: If there was no fresh meaningful vote by February 27th then PM would allow Parliament to vote on alternatives.

trades above the psychological ¥110 level at ¥110.20 as the market begins the week with a more optimistic outlook of the upcoming US-China trade talks. 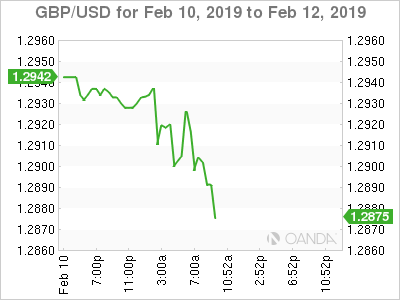 Data this morning showed that the U.K. economy slowed in 2018 as businesses slashed investment because of the growing uncertainty about the U.K.’s exit from the E.U.

Note: The BoE has warned that the economy could fall into recession due to a disorderly exit. 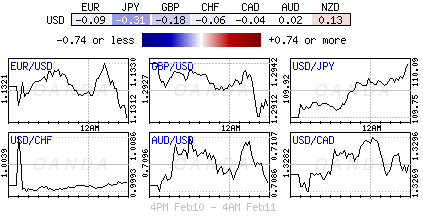