Stocks begin a new week under pressure, as investors mull over some lofty corporate earnings and a number of key policy meetings.

A host of G10 central banks are on tap to offer their monetary policy decisions – the Bank of Japan (BoJ), Reserve Bank of India (RBI), Bank of England (BoE) and the Federal Open Market Committee (FOMC).

Up until last week, capital markets were not expecting any changes to the BoJ’s policy. Nonetheless, Japanese policy committee are supposedly mulling over some adjustments to policy to help their banking sector – 10-year JGB yields have backed up from 0.035% to 0.10% in anticipation of tomorrow’s announcement.

Elsewhere, the BoE is expected to increase its policy rate by 25 bps even amid Brexit gloom, while the RBI is 50/50 on higher rates. The Fed is expected to leave its fed funds rate unchanged. However, look for any indications that U.S. policy-makers are shying away from two more interest rate hikes before the end of this year.

On the fundamental front, it’s a heavy week for economic data with the week ending with Friday’s U.S. (NFP).

In Japan, stocks closed lower overnight as possible changes this week in the BoJ’s monetary policy weighed on sentiment, while quarterly earnings were also in focus. Japan’s share average closed down 0.74%, while the broader fell 0.43%.

Down-under, Australia’s closed down 0.4% following Friday’s 11-year closing high, with health care down 1.1%. In South Korea, the stock index and the won weakened overnight ahead of key central bank meetings and U.S. inflation and payrolls data. At close, the index was down 0.06%.

In Hong Kong and China, stock indexes closed weaker overnight, pressured by a slump in health-care shares. In Hong Kong, the ended down 0.25%, while the was unchanged. In China, the blue-chip index fell 0.2%, while the slipped 0.1%. 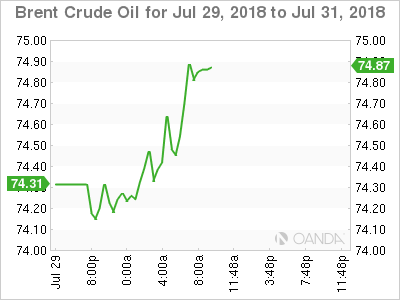 Oil prices are a better bid with the U.S benchmark moving higher after a month of declines, but gains remain capped as the fallout from trade tensions weigh on markets.

The U.S. economy grew at its fastest pace in nearly four years in Q2, but trade tensions remain high between U.S. and China despite an easing between the U.S. and the EU.

Last Thursday, Saudi Arabia said that it was “temporarily halting” all oil shipments through the strategic Red Sea shipping lane of Bab al-Mandeb after an attack on two oil tankers by Yemen’s Iran-aligned Houthi movement.

Note: An estimated 4.8 million bpd of crude oil and refined petroleum products flow through this waterway towards Europe, the U.S. and Asia.

According to Baker-Hughes data last week, U.S. energy companies added three oilrigs in the week to July 27, the first time in the past three weeks that drillers have increased activity. 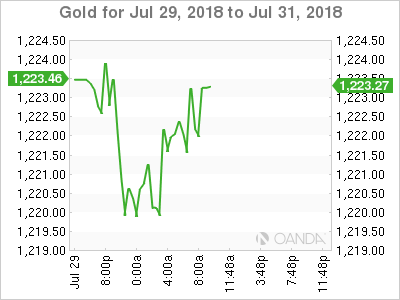 Japanese government bond prices fell overnight, with the benchmark 10-year yield touching its highest level in 18 months as the market tries to test the BoJ’s intention ahead tomorrow’s decision.

Higher yields has forced the BoJ to conduct a “special bond buying operation” to stem rising bond yields amid growing expectations that Japanese policy makers could adjust its policy. On Friday the BoJ lowered the yield to 0.10% – still, the 10-year JGB yield rose to as high as 0.11% earlier this morning, in defiance of the BoJ’s apparent defence line.

Note: Some believe that the BoJ could possibly announce it would allow larger moves in the JGB market by loosening its interpretation of its policy target of “around zero percent” in the 10-year yield. 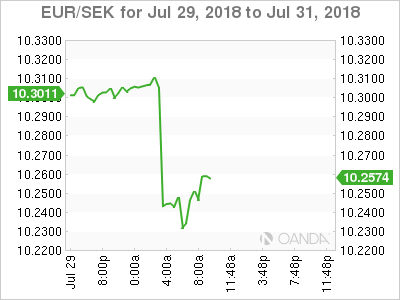 Major currency pairs are trading in a tight range as the markets focus turns to central bank meetings this week.

(€1.1663) is steady as a plethora of German States reports their July CPI data, which for the most part saw the year-over-year above the consensus for the national reading. The ‘single’ unit could not find much traction, despite the 10-year Bund hitting a six week high near 0.43%.

(¥111.10), again its steady and holding above the psychological ¥111 handle ahead of tomorrow’s BoJ rate decision. Overnight, the BoJ conducted a fixed rate JGB Bond Purchase operation – an unlimited amount of 5- to 10-year JGB’s at 0.10% (its third operation within the past week).

Elsewhere, the (€10.2419) fell by 0.6% as Sweden Q2 preliminary GDP beat expectations and kept the time frame intact for the Riksbank to hike rates around year-end. 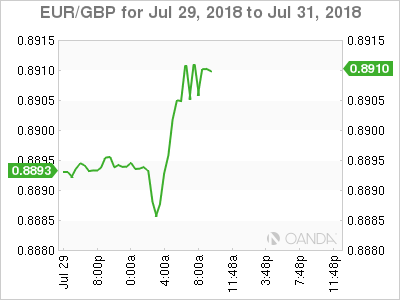 U.K. data this morning showed that the British consumer borrowing remained broadly stable last month, which would suggest another month of steady growth in household spending.

Bank of England (BoE) data showed banks lent £5.4B to consumers in June, net of repayments, a touch higher than the £5.3B in May.

Borrowing on credit cards and other unsecured forms of lending was flat at £1.6B, while mortgage lending inched higher.

Digging deeper, the number of new home loans approved by lenders in June also rose compared with May, to 65,619.

Note: An uptick in mortgage lending offer signs that potential homeowners may be seeking to finalize their purchases before further hikes in borrowing costs this week. 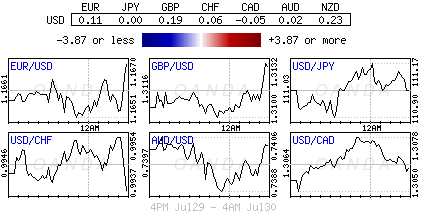