Global stocks remain under pressure, as investors continues to analyze the impact of a trade spat between the world’s two largest economies – U.S. and China.

Markets are beginning to get very nervous by the prospect of a full-blown trade war, and this despite the tariffs so far announced by the U.S. administration, and China’s retaliatory measures, amount only to a small amount of goods. It’s the contagion effect to other major economies that the markets are really worried about.

In China overnight, the People’s Bank of China (PBoC) sent a strong signal of policy easing by cutting their reserve requirement ratio (RRR) by -50 bps (as expected), to free up fresh liquidity for the real economy. This move may also fuel trade tensions between the U.S. and China. The cut comes into effect July 5, one day before the first round of U.S. tariffs on Chinese goods begin.

On tap: The RBNZ meets on Thursday and a ‘dovish’ message is expected. Stateside, U.S. consumer confidence (June 26), U.S. durable goods and U.S final GDP (June 28) should provide some interest for investors.

In the U.K. and Canada, GDP data unfolds, while in Japan, retail sales, the unemployment rate and industrial production will peek markets interest.

Equities in Asia led the retreat overnight in the wake of reports that the Trump administration is preparing new curbs on Chinese investments.

In Japan, the share average dropped as sellers targeted large caps as well as defensive stocks, while the mining sector outperformed after oil prices jumped on Friday. A stronger yen also fuelled the selling pressure. The Nikkei fell 0.8%, extending the weekly drop of 1.6% in the past week. The broader dropped 1%.

Down-under, a pullback in financials helped keep Australia’s stock indexes lower, but the continued to outperform. It fell 0.2% to notch a second consecutive modest drop. In South Korea, the closed higher, up 0.3%.

In Hong Kong, stocks touched a six-month low as the U.S. plans China tech investment limits. The fell 1.3%, while the lost 1.2%.

Note: The U.S. is drafting plans that would block firms with at least 25% Chinese ownership from buying U.S. companies with “industrially significant technology.

In China, stocks reversed early gains to close lower overnight, as an expected RRR cut was largely offset by lingering trade war fears. The blue-chip index fell 1.3%, while the slid 1.1%.

In Europe, stocks have opened lower as trade concerns continue to weigh on risk sentiment. A coalition disagreement in Germany is also leading to investor concerns. 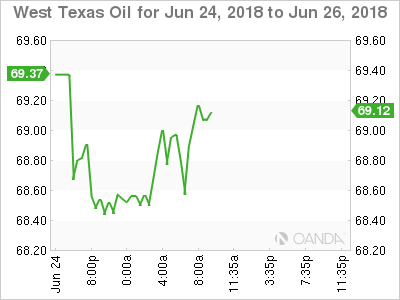 Oil prices remain on the back foot as the market factors in an expected 1m bpd output increase in the wake of last week’s OPEC meeting.

Note: Because of unplanned disruptions (Venezuela and Angola), OPEC’s output has been below the targeted cuts, which it now says will be reversed by supply increases, especially from Saudi Arabia.

Stateside, U.S. energy companies last week cut one oil rig, the first reduction in three months, lowering the total rig count to 862. While in Canada, an oil sands facility outage could leave North America short of 360K bpd of supply for all of July.

Ahead of the U.S. open, gold prices have edged lower, pressured by a strong U.S. dollar amid prospects of higher interest rates, while global trade tensions is keeping the ‘yellow’ metal above its six-month low print last week. is down 0.3% at $1,264.70 an ounce, while U.S. for August delivery are 0.3% lower at $1,266.60 per ounce. 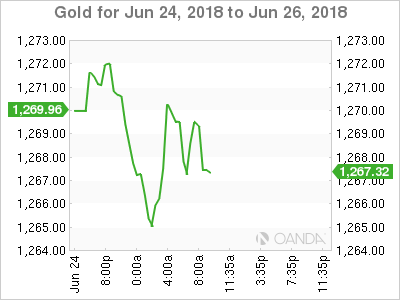 Global sovereign yields remain under pressure, mostly on trade tensions, but some for other reasons as well.

The yield on Germany’s 10-year Bund remains under pressure after E.U. leaders failed to reach a deal over the weekend on a new approach to immigration. The 10-year Bund yield fell 2 bps to 0.31%. For directional cues, dealers will now look to the E.U. summit on immigration this Thursday and Friday as well as Friday’s release of eurozone inflation numbers, which could see core inflation, drop to 1%.

There is only one central bank meeting this week and its Thursday’s RBNZ monetary policy announcement where they are expected to deliver a ‘dovish’ tone and signal again that the next move could be “up or down.” 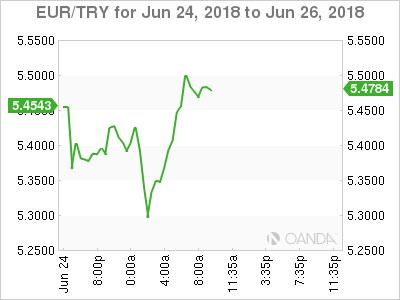 The TRY jumped after Recep Erdogan won yesterday’s presidential election, and his Justice and Development Party, together with Nationalist Movement Party, grabbed the majority of the seats in the parliament.

The initial moves saw trade down to its lowest in nearly two weeks of $4.5373. However, TRY is again under pressure, revisiting the concerns that the currency had come under heading into the elections. The TRY ($4.6638) continually hit record lows on the perceived lack of independence of the CBRT bank after the elections.

Elsewhere, (€1.1645) has reversed some of its initial overnight losses despite the continuing disappointment of German data. 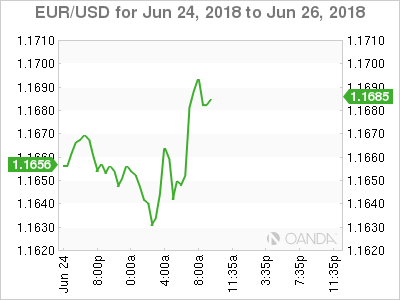 Data this morning showed that German business sentiment deteriorated further this month. According to the Ifo institute, German companies are “less satisfied” with their current business situation.

Clemens Fuest, the president of the Ifo Institute said, “the tailwinds enjoyed by the German economy are subsiding.” 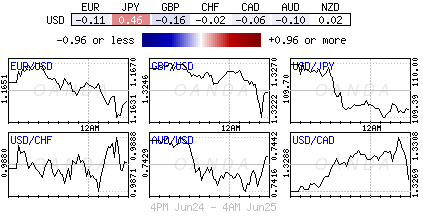