Global stocks have started the week on the front foot on signs of progress in U.S.-China trade negotiations. News of trade progress is also boosting oil prices, which snapped a two-week winning streak when they fell last week.

This is a busy week for central bank’s monetary policy announcements. Investors will be looking to see if growth forecasts are cut by the ECB, whether the RBA’s is fearful of its housing weakness growth and if the Bank of Canada becomes slightly more ‘dovish’ and worried about slowing growth.

Dovish signals from the European Central Bank (ECB) and the Fed in recent weeks is also helping equities bounce off its December slump. Downgrades to the ECB’s staff forecasts should provide the backdrop for an announcement of extra bank funding.

In currencies, sterling has found support as some members of the European Research Group are conditionally prepared to back Prime Minister Theresa May’s Brexit deal. An immediate Brexit crash out is appearing less and less likely and the March 29 deadline looks to be pushed back.

Stateside, Friday’s payrolls report is the highlight for U.S. economic data releases this week, and investors will also get a look at the latest Beige Book on Wednesday.

1. Stocks get the green light

In Japan, the rallied to a fresh three-month high overnight, as companies with exposure to China found support on signs Beijing and Washington are closing in on a trade deal to end their bitter year-long tariff dispute. The Nikkei share average gained 1.02%, while the broader gained 0.7%.

Down-under, shares climbed to a six-month closing high overnight as investors hailed a possible end to the Sino-U.S trade conflict. The rallied 0.4%, extending gains for a fourth consecutive session. The benchmark also advanced 0.4% on Friday. In South Korea, the stock index fell 0.2% overnight after the summit between North Korea and the U.S. collapsed last week, and investors moved to the Chinese market.

In Asia, Chinese shares were the biggest gainers, with the blue-chip index up as much as 3%, while in Hong Kong, the added 0.7%.

In Europe, regional bourses trade higher across the board following a ‘green’ light session in Asia and higher U.S. futures. 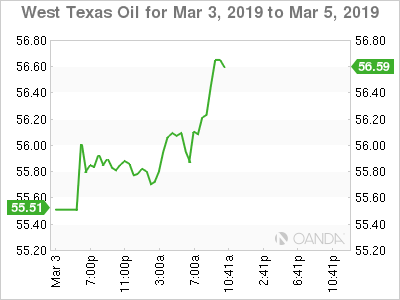 Oil prices start the week higher, supported by output cuts by OPEC+ and on reports that the U.S. and China are close to a trade deal to end a bitter tariff row that has slowed global economic growth.

A recent survey by Reuters shows supply from OPEC+ fell to a four-year low in February, as top exporter Saudi Arabia and its allies over-delivered on the group’s supply pact while Venezuelan output registered a further involuntary decline – data shows that exports are off by 1.5 million bpd since last November.

Stateside, there are signs that the oil production boom, which has seen crude output rise by more than 2 million bpd since early 2018 to more than 12 million bpd, may slow down. U.S. energy firms last week cut the number of oil rigs looking for new reserves to the lowest in almost nine months. Some producers are looking to cut back on spending. 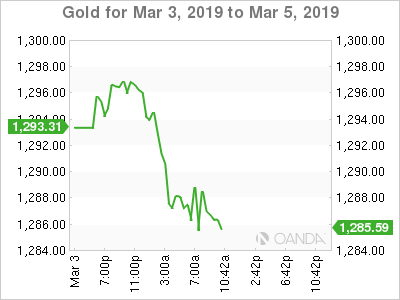 Greece’s benchmark 10-year government bond yields dropped to their lowest in 12 years this morning after Moody’s raised its rating last Friday, encouraging investor optimism towards the eurozone’s most “indebted” country. Moody’s lifted Greece’s issuer ratings to B1 from B3, citing the effectiveness of the country’s reform programme. Greece’s 10-year yield dropped to 3.622%.

Broader eurozone yields are generally flat to slightly lower, though still trade atop of their recent two-week highs on signs of a possible U.S.-China trade deal. Germany’s 10-year Bund yield is a tad lower at 0.18%, down from a four-week high of 0.208% last Friday. 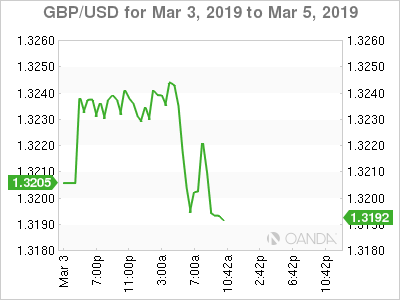 4. Rising odds of May’s deal succeeding is supporting the pound

The fact that some members of the European Research Group are conditionally prepared to back U.K. Prime Minister Theresa May’s Brexit deal is helping the pound, which is last up 0.3% at £1.3241. However, the probability of her deal being voted through remains below 50%. Many expect Article 50 will need to be extended for further negotiations.

Note: Tomorrow’s U.K. services PMI (4:30 am ET), is more important for the pound short-term direction given that the U.K. economy relies on the dominant services sector.

is under pressure, down 0.5% to €1.1337, pulling further away from last week’s peak of €1.1422, though the pair is still trading within the range it’s been in for the past several months. Weak eurozone data of late and the Fed taking a break from hiking interest rates has many investors unsure on the future direction and content in sitting on the sidelines. 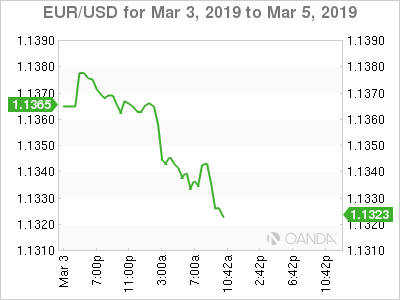 Data this morning showed that eurozone producer prices rose slightly faster than expected last month, pushed up by a jump in energy and capital goods.

Eurostat said prices at factory gates in the 19 countries sharing the ‘single unit’ rose 0.4% m/m for a 3% y/y increase. Market consensus had expected a 0.3% monthly rise and a 2.9% annual gain. 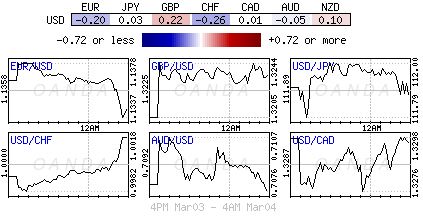