Monday, May 28: Five Things Markets Are Talking About

Global equities are trading higher in this holiday shortened trading week in a risk-on mood, buoyed by signs that an U.S.-North Korea summit is back on track.

In Europe, the EUR has found some relief after Italian President Sergio Mattarella yesterday blocked the formation of an anti-establishment government between the League and the 5-Star Movement. This may pave the way for another election.

Note: Trading remains subdued to holidays in the U.K. and U.S.

The market will turn its attention to the economy this week with readings on Euro inflation, Chinese manufacturing and Friday’s U.S. non-farm payroll (NFP) report, the last before Fed meets in June. In Canada mid-week, the Bank of Canada will announce its rate decision.

In Japan, shares ended little changed overnight as a further slide in oil prices pulled down energy-related stocks, offsetting initial gains stemming from renewed hopes for a U.S.-North. Korea summit next month. The benchmark share average closed up 0.1%, while the broader slipped 0.1%.

Down-under, shares closed lower on Monday as mining and oil stocks were pressured by weaker commodity prices while banks fell as the Royal Commission resumed its hearing. The fell 0.5%. In South Korea, the rallied 0.8%, buoyed by stocks, which are seen as benefiting from a further thawing in tensions with North Korea.

In Hong Kong, stocks closed higher overnight amid optimism that the U.S. and North Korea are still working towards holding a summit. The ended 0.7% higher, while the closed +0.6% higher.

In China, the blue-chip index ended higher on Monday, helped by robust gains in consumer and healthcare firms, and on positive geopolitical talks. The blue-chip CSI300 index closed up +0.4%, while the slipped 0.2%.

In Europe, stocks have opened higher, but have since moderated as the session progresses, still remaining broadly positive. Trading remains light due to extended weekend in some major markets. 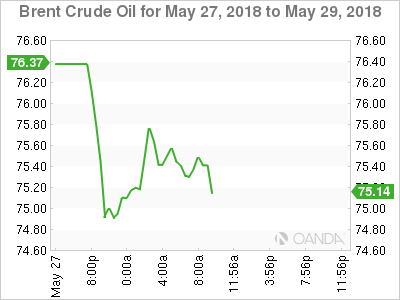 Oil prices remain under pressure, extending Friday’s steep declines as Saudi Arabia and Russia said they may increase supplies and as U..S production gains show no signs of waning.

Note: Brent and WTI have fallen by 6% and 8%, respectively, from this month’s highs.

Saudi Arabia, as well as top producer Russia, said on Friday they were discussing raising oil production by some 1m bpd to address regional supply shortages brought about under trade and tariff constraints.

Also providing pressure is production, which is showing no sign of abating as drillers continue to expand their search for new oil fields to exploit.

U.S. energy companies added 15 rigs looking for new oil in the week ended May 25, bringing the rig-count to 859, the highest in three years .

Gold prices have fallen for a second consecutive session as political tensions eased after U.S. President Donald Trump revived hopes of a U.S.-North Korea summit. has declined 0.4% to $1,296.20 per ounce, while U.S. for June delivery fell 0.6% to $1,295.60 per ounce. 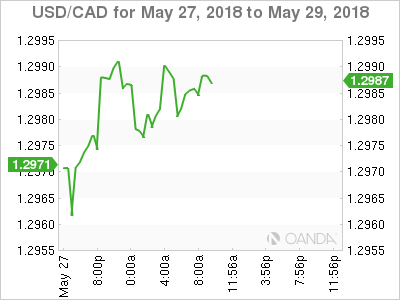 Bank of Canada governor Stephen Poloz is expected to hold the key overnight interest rate at 1.25% during his policy announcement on Wednesday (10:00 am EDT) before raising it 25 bps in July. Canadian futures prices suggest that with further rate hikes over the next year, the overnight lending rate will be atop of 2% because Canada’s economy is strong and inflation is expected to run at or slightly above the BoC’s 2% target.

Note: Moody’s has put Italy’s Baa2 sovereign rating on downgrade review as the country faces “significant risk of a material weakening in its fiscal strength given the plans of the new anti-establishment coalition government, which threatens to reverse some prior reform efforts.” 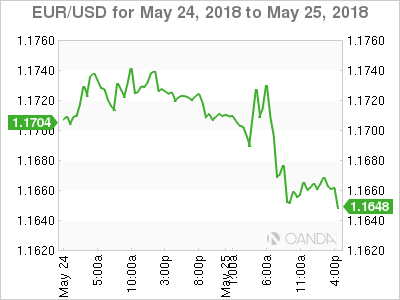 4. Euro finds some support, but is it long lasting?

The EUR (€1.1707) has found some temporary relief after Italian President Mattarella blocked the formation of an antiestablishment government between the League and the Five Star Movement, with up 0.5% at €1.1707. Nevertheless, caution will remain, as it’s too early to switch to full risk-on mode, as the political picture in Italy remains complex. 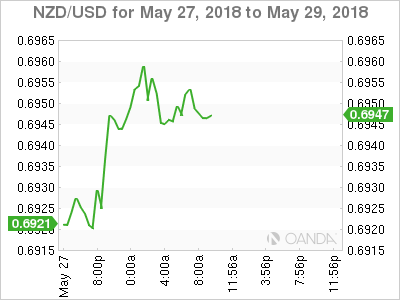 The Kiwi dollar (NZ$0.6955) has finally found some support in the wake of the government announcement to cull some 2% of the country’s dairy-cattle herd to eradicate an infection called mycoplasma bovis.

It’s anticipated that the 10-year cost will be some +NZ$886m, most covered by the government.

Note: The dairy industry has expanded rapidly over the past two decades and the country is the world’s largest exporter of milk products, accounting for a third of all trade and worth NZ$12B a year. 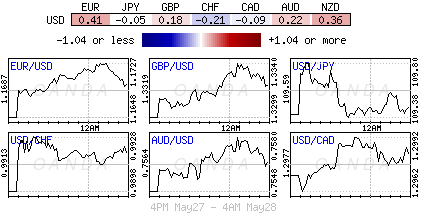