Aside from the FAANG share liquidation to the tune of $1 trillion in face value last week, capital markets have been grappling with the expected pace of the Fed rate hikes for 2019.

A December Fed hike has already been priced in, but with weaker U.S. data and an ongoing trade war, between the world’s two largest economies, dealers are reducing their bets on a three-cycle hike from the Fed next year. Rate differentials and the liquidation of ‘frothy’ U.S. assets has not been a big support for the U.S. dollar. Investors will analyze the FOMC minutes to be released mid-week for clues to future policy.

Sterling has been the currency of danger, providing spikes of volatility with lower than usual volumes on Brexit agreements and disagreements. As of today, U.K. and EU negotiators have agreed on the text of the deal outlining the future relationship between the U.K. and the European Union. However, Prime Minister Theresa May’s work is not done yet; she still has to get parliamentarians to sign off on the deal and even her cabinet.

Elsewhere, trade tensions are heightened with the Group of 20 meeting later this week and whether the meeting will provide a venue for China and the U.S. to take steps toward resolving some of their trade issues.

While in Europe, Italy remains a cause for concern with the European Commission rejecting its budget proposal and pursuing an excessive deficit procedure (EDP), which could lead to sanctions. Rome is coming under some pressure again as the government continues to show defiance in the face of sanctions and market pressure. There is hope however, earlier this morning, the nation’s Deputy PM Matteo Salvini signalled a new openness to alter the country’s budget deficit target for next year.

Elsewhere, the dollar and Treasuries ticked lower, while oil gained and extended its recent tumble to below $4,000 as cryptocurrencies fell across the board.

On tap: ECB’s Mario Draghi will address the European Parliament’s committee for economic and monetary affairs this morning. Presidents Donald Trump and Xi Jinping plan to meet at the G-20 that starts on Friday. Fed Reserve vice chairman Richard Clarida speaks in New York tomorrow and chairman Jerome Powell speaks on Wednesday. G20 meeting is to be held in Argentina from Nov. 30-Dec 1.

Japanese shares rallied overnight to touch a one-week high, with an upcoming World Expo in Osaka lifting the market – they won the bid to host the 2025 World Expo at the weekend. The share average ended the session up 0.76%, posting its second session of gains. The broader was up 0.2%.

Down-under, shares traded lower on Monday by heavy losses for the mining and energy sectors. Australia’s closed down 0.78%, after rising 0.4% on Friday. In South Korea, the stock index jumped overnight, boosted by gains in chemical and airline stocks on oil rout. The index closed up 1.24%, its biggest gain since Nov. 2.

China stocks shed early gains to end lower overnight as investors weighed a number of risks in the upcoming Sino-U.S trade talks, Chinese economy and global oil prices. At close, the index was down -0.1%, while the blue-chip CSI300 index was also down -0.1%.

In contrast, stocks in Hong Kong rallied on Monday, on signs of the U.S Fed slowing its pace of hiking interest rates. The ended +1.73% higher and the Hang Seng China Enterprises index rose +1.3%.

In Europe, regional bourses are trading higher across the board with the majority of indices trading over 1% higher after a positive session in Asia and stronger futures in the U.S. The outperforms following reports Italy is set to compromise on its budget targets. 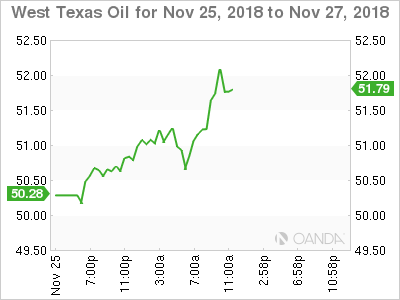 Oil prices have clawed back some of Friday’s 7% losses, but Brent is failing to hold above the psychological $60 per barrel.

The downward pressure comes from surging supply and a slowdown in demand growth, which is expected to result in an oil supply overhang by next year.

Market consensus sees oil-demand growth over the next couple of quarters will help balance rising supplies, but demand could structurally slow further into 2019-2020.

In this scenario, OPEC and company will be required to act decisively and quickly with a combined supply cut if they want to avoid a much deeper pull back in oil prices.

The North American crude ‘bears’ continue to see further price downside risks from the growth in U.S. shale production as well as the deteriorating economic outlook.

Concerned about an emerging production overhang, OPEC is expected to push for cuts at its Dec. 6 meeting – expectations for a supply cut are in the region of 1 million to 1.4 million bpd.

Ahead of the U.S. open, gold prices were little changed with the market looking to this week’s G20 meeting for any signs of optimism in the Sino-U.S. trade conflict. is little changed at $1,222.36 per ounce, while U.S. are flat at $1,223.3 per ounce. 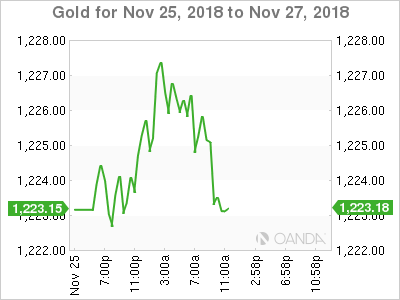 Italian BTP yields fell by over 30 bps to reach over two-month lows overnight after reports that Italy’s governing coalition is bowing to pressure and is planning to reduce next year’s budget deficit target.

Italy is considering reducing its deficit target to as low as 2% of GDP to avoid a disciplinary procedure from Brussels.

Hopes of an agreement have pushed Italy’s 10-year BTP yield down by 22 bps to a two-month low of 3.19%, while its spread over German Bunds is at its tightest in over a month at 284 bps. 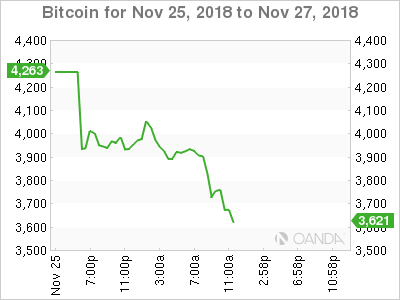 4. Dollar unfazed for the moment

The USD is trading mixed against G7 currency pairs and is expected to take its cue from this weeks FOMC minutes. A percentage of the market believes the Fed minutes could lean towards the ‘dovish’ side after the recent equity volatility.

The EUR (€1.1369) has strengthened against G7 currencies overnight, with risk appetite lifted after the EU and Britain agreed a Brexit deal and signs that Italy is willing to reach a compromise over next year’s budget plans.

Sterling (£1.2844) is better bid this morning after EU ratified the Brexit withdrawal treaty on the weekend. However, May has reiterated that the next few weeks are crucial for Britain’s future, and the Brexit vote would be one of the most significant votes in Parliament for many years. She stressed that the best Brexit deal was achieved and in the national interest and that there would be no other deal negotiated or a second referendum.

Bitcoin (BTC) has extended its falls this morning to $3,843, down more than 5% from its overnight high on renewed selling in cryptocurrencies. 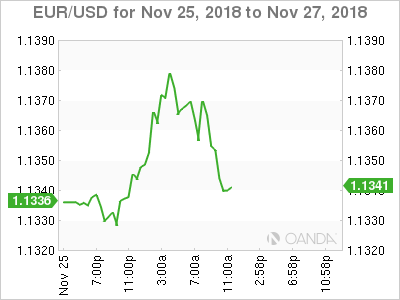 Data this morning shows that German business sentiment deteriorated for the third consecutive month in November, as companies continued to scale back their business outlooks for the next six months.

According to the Ifo, the business-climate index dropped to 102.0 points from a revised 102.9 points in October, falling short of 102.3 expectations.

November’s fall in the Ifo Business Climate Indicator adds to evidence that the German economy is slowing, but suggests that the particular weakness of Q3 will not be repeated at the end of the year.

Note: Current conditions are still well above its long-run average. 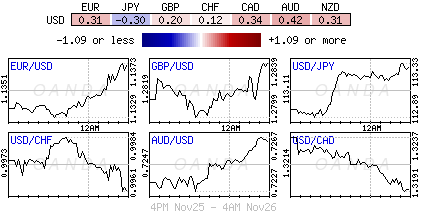