Global equities are trading mixed, with Euro stocks drifting, while U.S. futures are a tad higher after losses in Asia as the market continues to weigh the possibility of escalation of a Sino-U.S. trade war.

The ‘big’ dollar has extended last week’s gains, while U.S. yields have come under pressure again. In commodities, oil has rebounded from its biggest weekly loss in two months on speculation of a crude-supply shortage.

Elsewhere, the Swedish Krona (€10.4565) has edged higher after yesterday’s inconclusive general election – neither the Social Democrat-led nor the opposition Alliance bloc won enough votes to form a majority government.

On the central bank front, the Bank of England (BoE) and European Central Bank (ECB) will dominate proceedings this week (Sept. 13), while the Fed will release its Beige Book in preparation for its FOMC meet later this month. Japan will publish its revised Q2 GDP.

A sell-off in Chinese stocks pushed a number of Asian bourses to a 14-month trough this morning as the market braces itself for a potential escalation in the Sino-U.S. tariff row.

However, there were a few exceptions. In Japan, the share average snapped a six-day losing streak after robust revised GDP data trumped trade war worries. The Nikkei share average rose 0.30%, while the broader gained 0.20%.

Down-under, shares ended flat as health care, energy gains were offset by financials and materials losses. The fell 0.03% at the close of trade, its eighth straight session of losses. The benchmark declined 0.3% on Friday. In South Korea, stocks ended a three-day losing streak. The edged higher and was up 0.31%.

In Hong Kong, equities ended lower as the market braces for trade war escalation. The ended down 1.3%, while the lost 1.2%.

In China, stocks ended lower on new tariff threats as Apple (NASDAQ:) suppliers were hit by another Trump tweet. At the close, the was down 1.2%, while the blue-chip index was down 1.45%.

In Europe, regional bourses trade higher, tracking U.S. futures higher after a weaker session in Asia. In particular, Italy is outperforming after the Italian finance minister said that Italy would improve its budget balance. 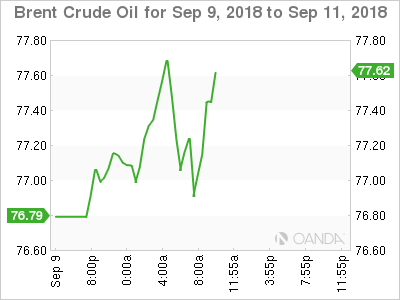 Note: The number of rigs drilling for oil in the U.S. has stalled in the last four months, which suggests an increase in well productivity.

Outside the U.S., Iranian exports are declining ahead of a November deadline for the implementation of new U.S. sanctions. 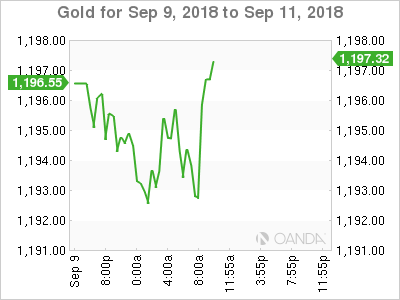 The gap between Italian and German 10-year borrowing costs is at its tightest in six weeks, after Italy’s Economy Minister Giovanni Tria predicted yields would drop as the government laid out its budget for 2019.

Tria said yesterday that Italian bond yields would fall as the new government began to implement policies to boost the economy with prudent fiscal measures.

Note: Italian debt rallied this month after the government indicated that Italy’s upcoming budget would stay within EU fiscal rules.

Italian yields are down 11 to 16 bps across the curve.

The BTP/BUND 10-year bond yield spread has tightened to 234.1 bps, its tightest level in six weeks, and 55 bps below last week’s widest levels. 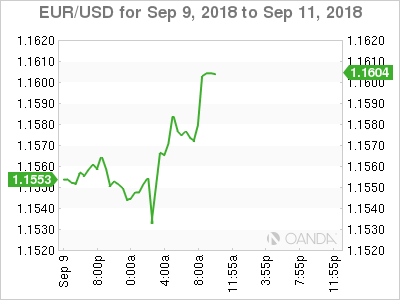 4. Dollar in demand on pullbacks

Global trade tensions sees the USD in demand on pullbacks as U.S. President Donald Trump tweeted that the U.S. has more potential tariffs against China in the works if needed.

(€1.1583) off its worst level as Italian official continued their pacifying comments on the 2019 budget. Techies note that €1.1750 remains the key resistance for now.

On the emerging market front, currency pairs again remain on the defensive. hit a fresh record high at $72.68 that prompted India to perform some verbal intervention. The rupee weakness is attributed to the release of the Q2 current account balance that recorded its widest deficit in five years. 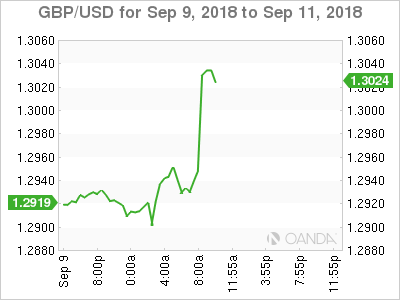 Data this morning showed that economic growth in the U.K accelerated in July, as warm weather powered consumer spending and construction.

According to the ONS, the U.K economy expanded +0.3% on month in July – a faster pace than the +0.1% monthly expansion recorded in June.

Note: Growth in the three-months through July was +0.6% compared with the previous three-months, or +2.4% on an annualized basis.

The data would suggest that the U.K economy is set for another quarter of growth despite little progress in Brexit negotiations.

Digging deeper, ONS data showed that the U.K’s goods trade deficit with the rest of the world narrowed in July, to +£10B from +£10.7B in June, as exports grew faster than imports. 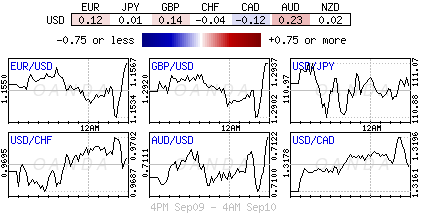