The party seems over for now for U.S. corn bulls, though soybean longs remain hopeful after a friendly government crop report, as farmers across the country wallow in misery from China’s decision not to buy from them.

’ front-month contract, September, fell 2% in Tuesday’s Asian trading, extending its 6% tumble—which marked the limit-down move—on the Chicago Board of Trade on Monday, pressured by higher-than-expected yield and acreage numbers cited by the government.

Before the summer, there couldn’t have been a better upward trending grain for speculators as corn rallied 20% in May alone—its best month in seven years—from a plantings squeeze brought on by inclement weather and flooding.

China is not a top destination for U.S. soybeans. Yet, in March, Chinese importers booked their largest U.S. corn purchase in at least 5-1/2 years, a rare sale of the grain in the middle of the U.S.-China trade war. Data at that time showed that private exporters sold 300,000 tonnes of corn to Chinese destinations for the 2018/19 marketing year, which ends on Aug. 31.

In The Red Since June, Corn Is Now A ‘Strong Sell’ 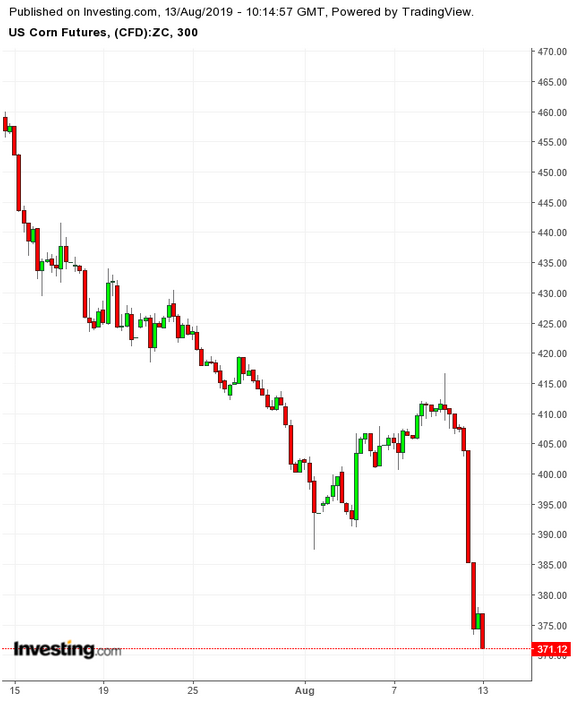 But after hitting its highest price since summer 2016, in May, U.S. corn’s front-month contract turned south the past two months—falling 1.6% in June and 4.8% in July. Month-to-date for August, it is down 5.8%.

The immediate future for corn bulls could be more distressing, based on technical outlooks for the grain and China’s suspension of U.S. farm imports.

Investing.com’s Daily Technical Outlook has a “Strong Sell” recommendation on corn, projecting a base case support of $3.7696 per bushel. Based on Monday’s settlement of $3.8525, that’s a drop of another 8.29 cents, or 2.2%.

Michael Seery, who plots technical outlooks at his Seery Futures consultancy in Plainfield, Illinois, said even fundamentally, corn “has absolutely nothing going for it, as demand is extremely weak.”

China’s exit piles on to a devastating year for farmers, who’ve struggled through record flooding and droughts that destroyed crop yields, and trade war escalations that have lowered prices and profits this year, CNBC reported.

Bob Kuylen, a farmer of 35 years in North Dakota, told the network:

“It’s really, really getting bad out here. There’s no incentive to keep farming, except that I’ve invested everything I have in it, and it’s hard to walk away.”

Demand Is Down, But Corn Yields Surprisingly Up

Adding to the China-induced pains was the U.S. Department of Agriculture, which surprised corn traders on Monday with a much higher yield than expected at 169.5 bushels per acre. Acreage was also higher than forecast, at 90 million acres.The USDA pegged corn production at 13.9 billion bushels. Coupled with 125 million fewer bushels of demand, coming mostly from a cut in exports, ending stocks stood at 2.181 billion bushels. The conclusion was a crop in excess supply of 171 million bushels since July and and 561 million above total market expectation.Jeff Kaprelian of the Hueber Report in St Charles, Illinois, described the USDA report as “one of those reports we’ll talk about for years to come”.But he also said the outlook for corn could improve over time, though not right away.Said Kaprelian:

“I personally have a hard time believing this market will stay down for very long given the enhanced potential for an early freeze coupled with the lateness of the crop. Ten percent of the crop still hasn’t pollinated, according to the crop progress report.”

“Significant uncertainty remains before crops reach maturity. Of particular concern is dry weather, which will be especially harmful to crops with shallow rooting, and the risk of an early freeze for late-planted crops.”

Soybeans A ‘Buy’ Despite China; Outlook Neutral To Friendly

Compared to corn, the crop outlook for soybeans was neutral to friendly, with yield unchanged at 48.5 bushels per acre and acreage unexpectedly cut to 76.7 million acres, versus forecasts for 81 million. Production was 120 million bushels lower than expectations, at 1.07 billion bushels. Final stocks were at 755 million bushels; 66 million less than forecast.

Despite U.S. soybean farmers missing out on China as their No. 1 export destination now, the improved crop outlook has limited the market’s downside.

’ front-month contract, November, rose 1.1% in Tuesday’s Asian trading, recovering substantially from Monday’s 1.6% drop on the Chicago Board of Trade. 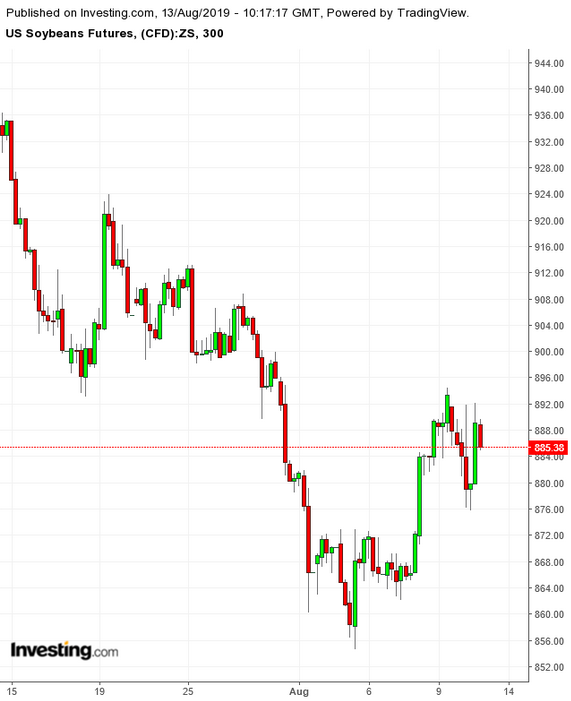 Investing.com’s Daily Technical Outlook has a “Buy” recommendation on soybeans, projecting a top-end resistance of $9.043 per bushel. Based on Monday’s settlement of $8.790, that’s a rise of another 25.3 cents or 2.9%.