Equity markets were a real roller coaster during the month of June. With the G7 summit finishing on a negative note and the uncertain aftermath of the recent OPEC meeting, markets appeared to be at a crossroads in late June. Investors’ doubts are certainly persisting in early July: The emerging U.S. trade war with China, its NAFTA partners and now the rest of the G7 countries is casting more uncertainty over global growth and largely explains the confusion of market participants as to what will come next.

There are also even more reasons than last month to worry about the rosy economic outlook for the remaining of 2018 and beyond. Falling indicators such as the Citigroup (NYSE:) U.S. Economic Surprise index (see graph below) and the continued downturn, since October 2017, in the IFO Expectations Index suggest that growth momentum may be peaking. For the month of July we thus remain neutral on equities against bonds, waiting at least for some of the fog to clear up before committing to a different position. 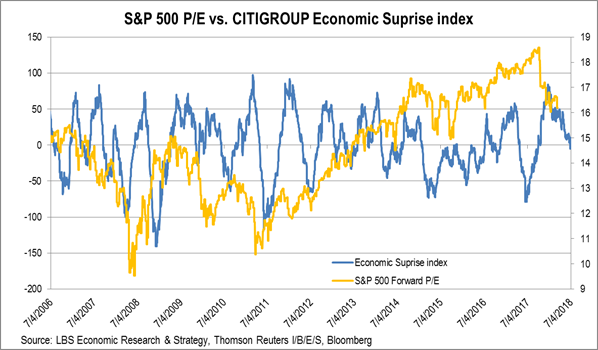 There are no major changes to our regional allocation this month with our largest overweight remaining Canadian and emerging market equities; we have done some marginal adjustments to reflect current risks and valuation (see the table below). Canadian stocks remain historically cheap relative to U.S. equities and we continue to expect Canadian prices to rise further in 2018 on the back of strong global demand for oil, a tightening global oil market and as constraints on market access in Canada get resolved. Even if new pipelines won’t be in operations before 2020, markets should start reacting positively when legal and political uncertainty relative to their construction will dissipate.

This being said, the OPEC biannual meeting which took place at the end of June, after months of over-compliance, failed to identify with precision by how much the production cuts will be adjusted to meet global oil demand and from which players these adjustments will come from. While Saudi Arabia presumably has 2M barrel per day (b/d) of excess capacity and Russia could probably prop its production by 500,000 b/d by year-end, the other countries which are part of the agreement are more constrained in their capacity to increase production in the near-term.

In the meantime, there are negative supply shocks streaming out of Canada (short term), Venezuela (long term) and Libya (undetermined) and the production in the Permian Basin in the United States is plateauing due to a lack of pipeline infrastructure to transport the oil and gas out of the region. All this makes it difficult for the market to forecast oil prices for the rest of the year and next. Our view is that the oil market will continue to tighten in the next quarter but that the Saudis and Russians will try to stabilize prices in order to discourage energy alternatives and investments in costly oil projects that could lead to excess crude supply, like in 2014.

Overall, an improvement in market access for Canadian oil over the medium term and an expansion of the compressed multiples of Canadian oil companies should benefit the Canadian oil sector and the TSX within a relatively short-term horizon (6 months to a year). The depreciated Canadian dollar also means that Canadian oil companies are pocketing more dollars for every barrel they sell, even if the discount on the barrel of Western Canadian Select (relative to the WTI) is historically wide.

We are also maintaining our overweight position in emerging equity markets as these remain cheap relative to developed markets. Macroeconomic conditions continue to be ideal for emerging markets, with low real interest rates, soft inflation measures and easy financial conditions. Both leading economic indicators (see graph below) and forward earnings for emerging markets are also accelerating relative to developed markets. However, a full fledge global trade war triggered by President Trump’s trade policies would most likely put an end to our optimistic emerging equity market forecasts. 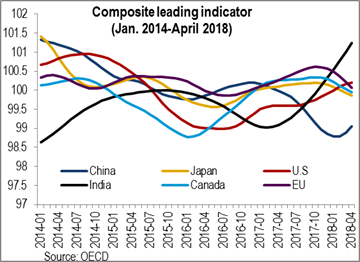 For the month of July, our sector allocation has not changed much. We are recommending that clients overweight positions in the Industrials, Financials, Energy, Information Technology andConsumer discretionary sectors in both the U.S. and Canada. For Canada specifically, the Information Technology sector was added in July and we also recommend keeping the overweight in the Materials sector that we had in June.

We are keeping our neutral stance on corporate bonds this month as valuation still remains historically rich, especially when adjusted for elevated corporate leverage. We remain concerned by the decelerating global economic momentum, the eventual slowdown in earnings growth and the withdrawal of major central banks’ monetary stimuli. All of these factors should ultimately hurt the relative performance of credit in the second half of the year.

Moreover, growing apprehensions over geopolitical uncertainties and increasing trade war hostilities should negatively impact the profit margin outlook of corporations. Similar to last month, we are not calling for corporate spread to get wider in July. However, as spreads are historically tight with little to be gained in terms of further compression and, as the timing of a credit spread reversal is notoriously difficult to forecast, we prefer remaining on the sidelines for now.