Natural gas bulls have persevered, pulling the market back from the worst two-week loss since March, after a devastating blow dealt to LNG shipments from coronavirus shutdowns. While the crisis isn’t exactly over, another challenge could emerge soon: triple-digit builds amid forecasts for mild pre-summer weather.

The weekly update on gas from the U.S. Energy Information Administration, due at 10:30 AM ET (14:30), could show a build as small as 83 billion cubic feet for last week, according to a consensus of analysts tracked by Investing.com. If accurate, it would be the first storage decline after increases of 103 bcf and 109 bcf in two previous weeks.

Reopening On The Way, But Market Reprieve Uncertain

Optimism that the market’s fundamentals may be on the mend with the reopening of the U.S. economy from COVID-19 lockdowns has helped a broader recovery in Henry Hub gas futures. The market’s is up 7% on the week despite Wednesday’s 3% drop. 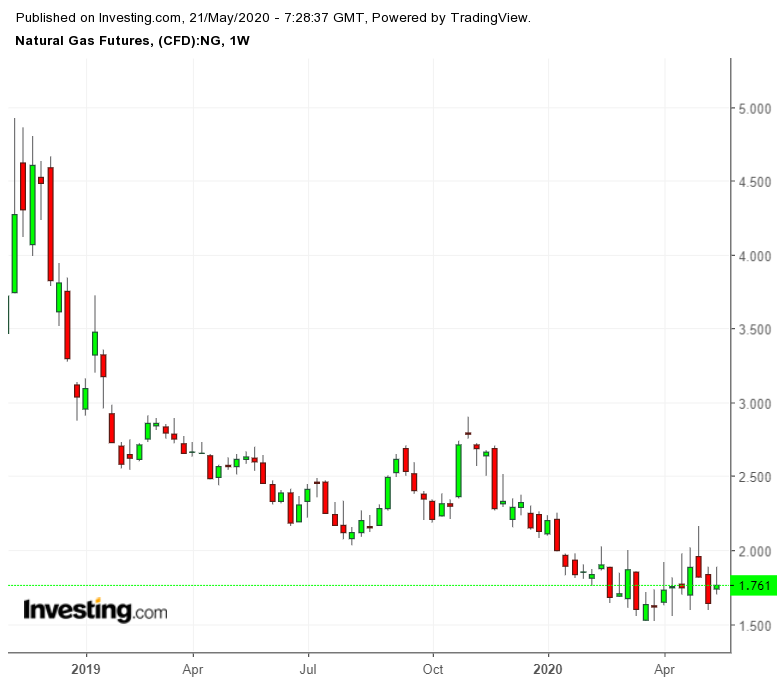 But the reprieve might be brief as milder weather could result in a string of 100+ bcf storage injections in the coming weeks.

“Predictions are currently set at 116 bcf, 108 bcf, and 111 bcf over the following three storage reports,” Dan Myers, analyst at gas risk consultancy Gelber & Associates said in an email to the company’s clients on  Wednesday, a copy of which was seen by Investing.com.

“Although production curtailments are set to reduce oversupply going into June, continued weakness in industrial and export sectors and the peak of relaxed, shoulder season demand will drive the rapid pace of injections in coming weeks.”

Forecaster natgasweather.com said a “slow-moving weather system” will stall across the U.S. East-Central region bringing a few more days with heavy showers and thunderstorms, although temperatures will remain at “still rather comfortable highs of 60s and 70s” Fahrenheit.

“A second weather system is bringing rain and snow showers to the West with slightly cool highs of 50s to 70s,” the forecaster said, adding that varying temperatures as high as 90 F was expected over Texas.

Whatever the case, the need for air-conditioning—and the power behind it that comes from the burning of gas—is expected to be “overall light,” the forecaster said.

Leticia Gonzales, editor at the naturalgasintel.com, made a similar point in her market blog on Wednesday, citing research by the Mobius Risk Group.

“Given that truly intimidating heat has so far remained at bay this injection season, Mobius Risk Group pointed out that ‘there is a degree of uncertainty on how strong overall power load and gas market share will be.’ ”

It hasn’t been an easy time for gas bulls. When oil drillers began shutting-in wells and idling in March as the pandemic sent to , gas futures hit 25-year lows on mild spring weather and lower heating demand—instead of rallying on the loss of associated gas production that usually comes from oil drilling.

Associated gas is hard to quantify, typically making it an estimate instead of a hard number.

Notwithstanding that dynamic, Henry Hub futures did have a surprisingly strong April—rallying 19% and breaching the psychologically-important for its best month since November 2018.

The run-up was helped by bursts of colder weather, as well as the assumption that associated gas production must be crumbling from the output destruction across U.S. oil fields forced by the coronavirus.

Despite April’s outperformance, by mid-May, doom struck again for gas futures. This time, it was in the form of U.S. LNG order cancellations as the COVID-19 decimated purchases of liquefied natural gas cargoes slated to sail from next month.

Global LNG demand by itself is expected to decline by about 11 million metric tons year-over-year from 2019, Poten & Partners said in April.

Goldman isn’t exactly bearish on gas. But it’s mindful of the challenges in the path of the market as weekly builds of 100+ bcf beckon from anemic demand for pre-summer cooling and continued woes for LNG.

Getting granular with some of the data it has gathered, Goldman said:

“On the demand side, we lower our balance-of-month LNG feed gas assumption by 1.1 bcf/d to 7 bcf/d reflecting realized data thus far in May. The latest week of data shows an even steeper drop in feed gas, suggesting total U.S. LNG export cancellations in Jun-Oct 2020 might end up about 1 bcf/d higher than the 2.3 bcf/d we currently assume for the period.”

Most of U.S. natural gas is still transported via pipeline across shared borders with Canada and Mexico. But LNG is an important and growing market. The United States became a net natural gas exporter—exporting more than it imported—for the first time in almost 60 years in 2017, helped by LNG exports.

Scott Shelton, energy futures broker at ICAP in Durham, North Carolina, says he believes Henry Hub’s flat price might survive the mild cooling demand and triple-digit storage builds, though he isn’t as optimistic about its ability to weather the impact of slumping U.S. LNG exports.

“Asia remains the only strengthening area for LNG exports at this time,” said Shelton.