The lockdowns coming off America’s businesses are stirring hopes of economic recovery, and natural gas hasn’t been spared after runaway gains in April.

But the US fuel for power generation, heating and cooling is at a crossroads just like other commodities.

Just how much of demand will return and whether projections for the summer will hold is something no natgas trader or analyst can answer with absolute sureness as businesses stagger back to their feet from the coronavirus pandemic.

“Many parts of the US will begin to take steps to reopen in the coming month but questions on the speed of this process remain,” said Daniel Myers, an analyst at Houston-based gas risk consultancy Gelber & Associates.

“It is not clear how fast industrial and power demand will return and the threat of additional virus outbreaks could bring renewed demand pullbacks.”

Another concerning development from the market’s perspective was the cancellation of up to 25 liquefied natural gas cargoes for June that posed an immediate threat to US LNG export terminal utilization.

“US LNG, prior to this pandemic, has been a real success story and demand is definitely impacted now, but it’s the future that we need to figure out and it’s still uncertain,” Neil Chatterjee, chairman of the Federal Energy Regulatory Commission, or FERC,  told a briefing via video stream hosted this week by the Washington-based Atlantic Council think tank.

In January, just before COVID-19 hit the United States in a major way, US LNG exports reached 8.1 billion cubic feet per day as the country’s gas exports reached 25 countries. That was the highest for US LNG exports since record keeping began in 1997, the Energy Information Administration said. The EIA hasn’t published newer monthly data since.

The FERC boss says he has spoken to counterparts in India, Hungary and the Czech Republic who were interested in partnering with the US on LNG.

“They also want to learn from our expertise to figure out what’s working, what’s not working and what the challenges are,” he said.

“I think we have to anticipate a global rebound and resurgence of demand and will need to see what those implications are and what role the US will be able to play in a post-pandemic LNG export space.”

Not Much Clue On Commercial Demand

The other concern, of course, is what commercial demand for power and cooling will be for the summer. With no insight yet on how much offices, buildings and places of indoor attractions will be filled through July at least, it’s hard to make estimates on electricity and air-conditioning consumption.

Whether an even split of home-commercial demand will achieve previous summer trends is something as uncertain as predicting the course of the coronavirus.

Some analysts aren’t even looking that far. With the tail end of spring typically remaining somewhat chilly, utilities often counted on continuous heating demand in early to even mid May.

But after last week’s cold snap, the weather was getting discernibly warmer and that could prompt those still locked at home to turn the heat down—or off completely.

“I am maintaining my Nat Gas view and bias at cautiously bearish as a warming trend is emerging over major parts of the US for the next several weeks,” said Dominick Chirichella, director of risk and trading at the Energy Management Institute in New York.

Major heat in the US Southwest will continue for the next 10 days at least, forecasts show. While the East—the traditional powerhouse of gas-fired heating—will see a shift toward more widespread below-normal temperatures after days 2-5, temperatures will be above normal across the West.

“A battleground area will set up across the Plains where more seasonable readings should occur,” Chirichella said, citing more weather patterns.

“The 12Z GFS is quite volatile during the day 11-15 period,” he said, referring to the Global Forecast System produced by the National Centers for Environmental Prediction. “It tries to bring warmer air back into the Central/Eastern US too fast and this was inconsistent with other guidance.” 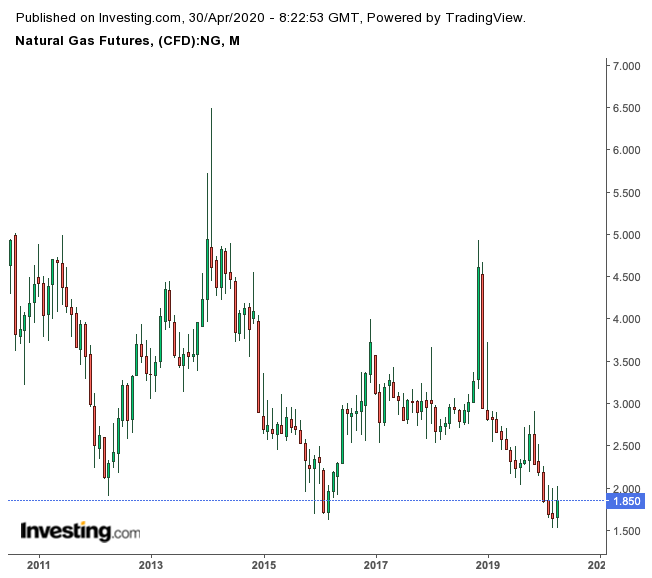 The uncertainty over direction comes as on the New York Mercantile Exchange’s Henry Hub are poised to finish April with a 14% gain—ending five straight months of losses—and posting the best return since November 2018.

The monthly gains were powered by this week’s 7% run-up in Henry Hub’s front-month—a rally powered by last week’s chilly temperatures that prompted those at home to crank up their heaters.

According to GFS data, there were 75 heating degree days (HDDs) last week compared with a 30-year average of 62 HDDs for the period. HDDs measure the number of degrees a day’s average temperature is below 65 degrees Fahrenheit (18 degrees Celsius) and are used to estimate demand to heat homes and businesses.

The cold snap—and a potential spike in gas consumption for heating—is prompting utilities analysts to bet that utilities injected just 69 billion cubic feet into last week after fulfilling customer needs. That would compare with a 114 bcf injection during the same week a year ago and the five-year (2015-2019) average injection of 74 bcf.

But Myers of Gelber expects the relatively bullish storage numbers to turn soon.

“Despite reports of shut-ins beginning to take effect, dry gas production remains relatively steady this week and will end the month of April averaging above 92 bcf per day,” he wrote in a note.

“Quickly abating shoulder season demand and weakness on the export front should allow the following injection (for the current storage week) to climb into triple-digits,” Gelber added.

Price-wise, the strength in gas futures from summer through winter 2020/21 belies the demand uncertainty in the market.

Henry Hub’s new front-month, June, settled Tuesday’s trade at $1.87 per million metric British thermal units, bringing a 15-cent premium already baked into the contract. But the July contract was already beyond $2 per mmBtu, while December—which officially starts the cold season—closed at $2.92 while January—the peak of winter—settled at $3.06.

“Prices are generally stronger as of late, but the lack of a short from the CTA side has made this more of a ‘grind’  higher though,” said Scott Shelton, energy futures broker at ICAP in Durham, North Carolina.

“I am wondering what it’s going to take to get them long? Looking  at the curve, the market continues to be pricing more gas than needed in the summer with spreads very weak, while its pricing less gas than what is needed in the winter.”

“Bottom line is that I am bullish, but I recognize that the market isn’t short and there isn’t a pain trade higher which means the market will be often victimized by selloffs that no one will understand.  The Winter 20-21 looks like reasonable value as well though its hard to buy it when it just rallied versus the summer.”