Put your head on my shoulder, Sandy Fielden, director of commodity research at RBN Energy wrote in a blog post a few years back as the market headed for another “shoulder season” of supply-demand.

While that line would have probably reminded many of the Paul Anka hit from the 1950s, Fielden was basically bringing readers up to speed on the two shoulder seasons in gas that were on the either side of winter. 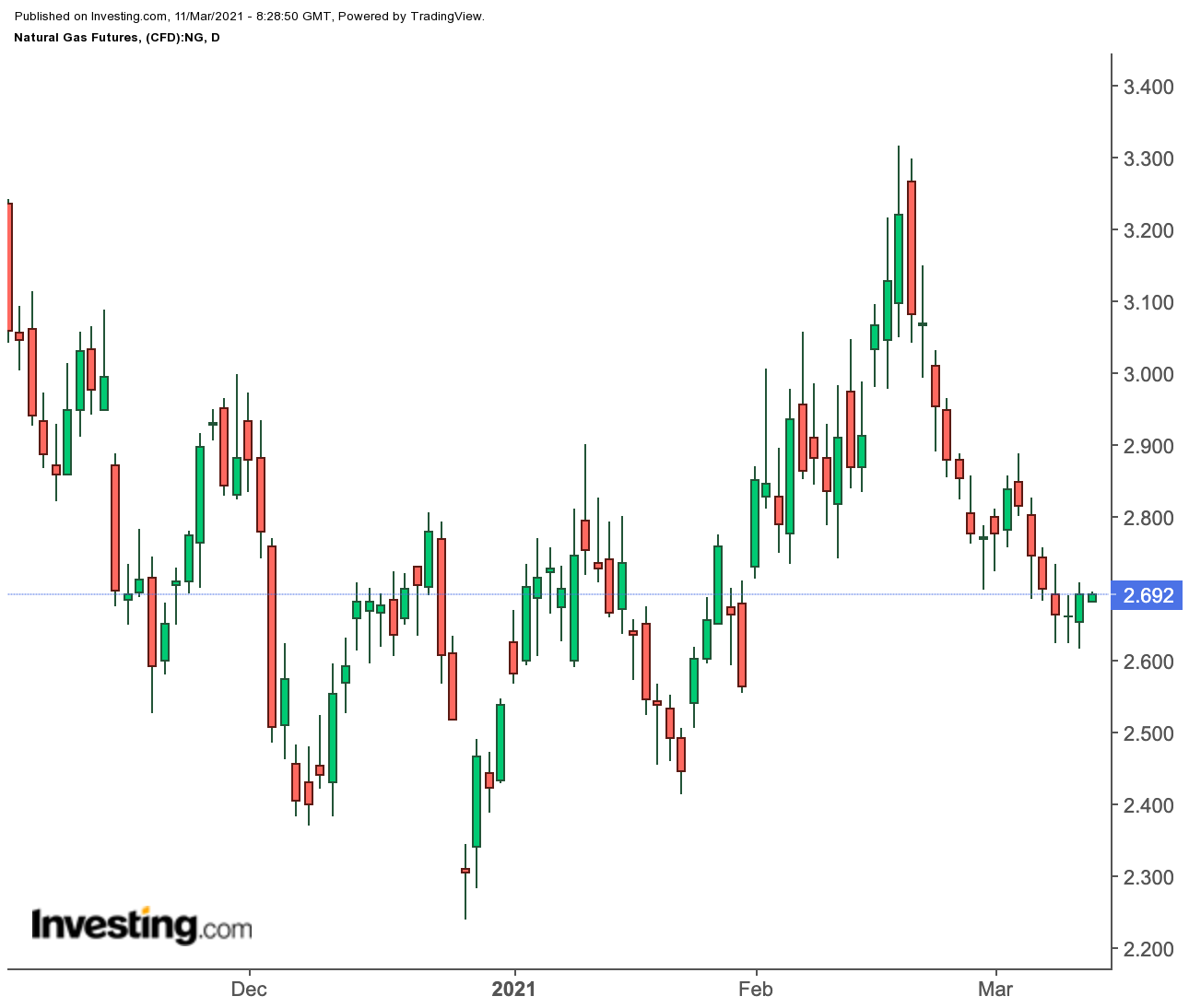 The left shoulder comes in the fall when summer temperatures fade and become benign on their way to winter—largely doing away with the need for air-conditioning and creating comfortable enough conditions indoors that do not yet require heating.

The right shoulder comes in the spring when there are fewer cold days and it’s possible to be indoors without cranking the heat up or even turning it on at all.

Bottomline: whichever side it’s on, a shoulder season means limited demand for natural gas—the primary fuel burned in many parts of the United States, particularly the East Coast, to provide both cooling and heating.

In just over a week, America will be heading for the spring shoulder season of natural gas as the 2020/21 winter progresses toward its Mar. 19 expiry.

As gas futures on the New York Mercantile Exchange’s Henry Hub slid on Wednesday for the sixth time in seven days, to point lower for a third straight week, Houston-based gas risk consultancy Gelber & Associates reminded its clients in a note what to beware of in the near-term: spring shoulder season.

The note came on the eve of the Energy Information Administration’s weekly update on , which was expected to have seen markedly lower drawdowns last week compared to the previous week.

Forecasts by analysts tracked by Investing.com show a consensus for a draw of 73 bcf, or billion cubic feet, during the week ended Mar. 5, versus the 98 bcf used up in the previous week to Mar. 26.

Gas drawdowns have fallen dramatically since the 338 bcf deficit during the week ended Feb. 19, which was the second largest volume of gas ever taken out from storage during a week, according to EIA data.

That blockbuster consumption came during the Feb. 13-17 snowstorms that hit a swath of central to southern United States, including Texas, a state that seldom experiences temperatures below 60°F (15.6°C).

The deep-freeze in Texas, the epicenter of US energy production and refining, was so bad that oil and gas couldn’t flow like normal in several of its key production basins.

Gelber & Associates, which expects the EIA to report a 70 bcf draw for last week, prodded its clients to move on from the Texas phenomenon:

“Withdrawals are anticipated to become less severe going forward as we progress further and further into the shoulder season.”

If the 73-bcf draw consensus for last week is accurate, it will be hardly changed from the same week a year ago, when 72 bcf was used up. The draw will also be lower than the five-year (2016-2020) average of 89 bcf.

Further, it will bring total gas in storage to 1.772 tcf, or trillion cubic feet. That would be 8.4% lower than the five-year average, and 13.6% below the same week a year ago.

There were 142 HDDs, or heating degree days, during the week to Mar. 5, compared with the 30-year norm of 153 HDDs, Refinitiv reported.

HDDs, used to estimate demand to heat homes and businesses, measure the number of degrees a day’s average temperature is below 65 degrees Fahrenheit (18 degrees Celsius).

Early estimates for the current week ending Mar. 12 ranged from withdrawal of 76 bcf to an injection—or storage increase—of 6 bcf.

In the same week a year ago, there was a 15 bcf withdrawal and a five-year average decline of 59 bcf.

Industry information portal naturalgasintel.com said there were weaker energy burns across much of the Lower 48 States amid the onset of spring-like conditions.

Bespoke Weather Services, in a forecast carried by the portal, said its 11- to 15-day reading leaned “a little on the warm side of normal.”

Bespoke’s domestic and European weather models both moved by about seven gas-weighted degree days from a day ago, the forecaster said, adding:

“Longer range expectations remain for a warm lean late month into April, which is still bearish. As such, we are not expecting weather to assist natural gas bulls much anytime soon, at least until entering the true warm season.”

Gas output has recovered from the Texas lows, though production of LNG, or liquefied natural gas, has tapered off. After topping 11 bcf last Friday—a high since the Texas freeze and near the levels seen prior to mid-February—LNG feed gas volumes have hovered near 10 bcf for five straight days.

“A bigger hindrance is a massive weakness in power burns, even on a weather-adjusted basis. This is at least partially due to huge wind generation, especially in Texas. In short, there is simply no catalyst to send prices back higher as of right now.”

Uncertainty For Some In The Trade

That left at least some traders on the sidelines, debating the next move.

Some have shifted from sellers to buyers lately in anticipation of prices bottoming out after the multi-day slump since the Texas outage that sent Henry Hub’s front-month April gas to a 15-week high of $3.32 per mmBtu, or million British thermal units, on Feb. 17.

On Wednesday, some 15 days after that spike, April gas settled at $2.69 per mmBtu.

On the technical side, Investing.com’s Fibonacci models suggest a high topping $2.76 and bottom as low as $2.58 for April gas.

“The market is sort of fumbling around, not quite sure what it wants to do.”

Disclaimer: Barani Krishnan uses a range of views outside his own to bring diversity to his analysis of any market. For neutrality, he sometimes presents contrarian views and market variables. He does not hold a position in the commodities and securities he writes about.