For a more in-depth analysis on Oil Prices, check out the Q3 Forecast for Oil

Brent and WTI crude futures have seen a mild reprieve this morning after falling to the lowest level since early April. Much of the losses had stemmed from the negative sentiment, consequently weighing on riskier assets, while the declines were exacerbated following the latest DoE crude inventories data. The report noted that US crude stocks had increased by 6.8mbpd, which was significantly above expectations of a fall of 2.5mbpd. This is also the third consecutive week that oil prices have come under heavy selling pressure following DoE statistics.

Elsewhere, the slight recovery in oil prices have come amid reports that the US and China are to resume trade talks at the end of the month. However, with Chinese delegation to be led by the Vice Commerce Minister, who will hold talks with the Deputy Treasury Secretary suggest that given the level of importance, resolving differences will take some time.

Following yesterday’s price action, both benchmarks have now broken below the important 200DMA ($71.44 for Brent, $65.89 for WTI). Consequently, this has strengthened the short term negative momentum given that crude oil is not yet reached oversold levels. Brent crude is eying the key $70 level, while the June lows at $63.40 is in focus for WTI. 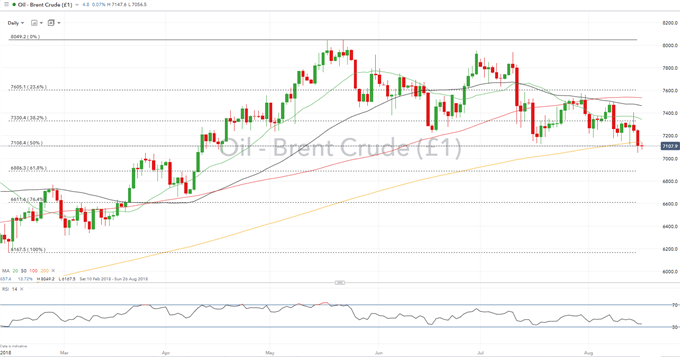 What Does Current IG Client Positioning Suggest About the Next Move in Crude Oil?

We typically take a contrarian view to crowd sentiment, and the fact traders are net-long suggests Oil – US Crude prices may continue to fall. Positioning is more net-long than yesterday but less net-long from last week. The combination of current sentiment and recent changes gives us a further mixed Oil – US Crude trading bias.