Wednesday, Jan. 2: Five things the markets are talking about

Investors enter 2019 remaining increasingly uncertain about where sovereign bond markets are heading given the confused interplay between interest rates, growth and inflation that intensified in Q4 2018.

The knock on effect from U.S. interest rates will have a material impact on the ‘mighty’ U.S. dollar and equity markets. Thus, it’s a necessity that the markets are focused firmly on the Fed.

Despite Fed officials continuing to express confidence in the U.S. economy, the market remains worried that even though the Fed has scaled back its rate-raising plans for 2019, higher interest rates still pose a risk to expansion.

Note: The Fed last month had penciled in two hikes for 2019, rather than the three officials predicted in September. However, the market sees things differently, fixed income dealers have priced out any additional hikes this year with Fed fund futures implying no change and a -25 bps cut in 2020.

It’s not just the Fed actions that will have an impact on volatility, but it’s what they will also say in 2019. Investors need to keep an eye on the Fed’s own messaging.

Note: Fed Chair Powell will have the opportunity to once again lay out the Fed’s direction for 2019 as he joins former Fed Chairs Janet Yellen and Ben Bernanke for a joint discussion this Friday (Jan. 5 10:15 a.m. EDT).

Officials have signalled they intend to rely more on recent economic data in setting interest rates and coupled with Fed Chair Powell’s intention to hold news conferences after every FOMC policy meeting will only add to the volatility.

2019 has started on the back foot with global equities under pressure after disappointing Chinese data overnight has ruined investors hopes for an upbeat start to the new year – safe havens including gold, Euro bonds and the yen have benefited in early trading.

Disappointing data from the world’s second-largest economy overnight is causing global equity markets to begin 2019 on the back foot. A private sector survey showed China manufacturing activity contracted for the first time in 19 months. The Caixin/Markit Manufacturing Purchasing Managers’ Index (PMI) for December fell to 49.7, from 50.2 m/m.

In Japan, equities were lower after the close this morning, as pharma, retail and power sector losses took the lead lower. At the close, the fell -0.31%.

Down-under, stocks kicked off the new year in the red, pressured by disappointing Chinese data – China is Australia’s largest trading partner and the AUD trades as a proxy for China economic growth. The closed 1.6% lower – the benchmark ended 0.1% lower on Monday.

In China and Hong Kong, stocks slumped in their first trading session as investors digested the disappointing data, adding to concerns over trade and an economic slowdown. In China the blue-chip fell 1.4%, while the ended down 1.1%. In Hong Kong, at the close of trade, the was down 2.77%, while the Hang Seng China Enterprises index fell 2.87%.

In Europe, regional bourses trade sharply lower across the board starting the year on a negative tone as weaker PMI data in Europe and China added to the negative sentiment. 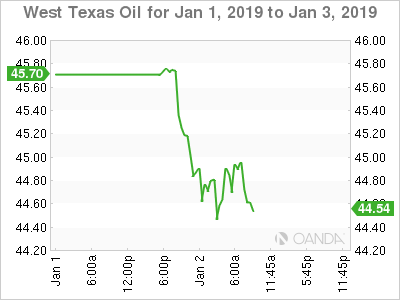 2. Oil kicks off new year with losses on signs of economic slowdown

Oil markets start the new year on the back foot, pulled down by surging U.S. output and concerns about an economic slowdown in 2019 as factory activity in China, the world’s biggest oil importer, contracted.

A number of factors are expected to provide heightened volatility in the commodity space in Q1, 2019. There is the markets uncertainty on Sino-U.S. trade; there is Brexit, as well as political instability and conflict in the Middle East. There is U.S. shale output numbers and there is OPEC’s and Russia’s supply discipline. All factors that are expected to have a meaningful impact on energy price in H1.

Gold prices scaled new heights earlier this morning, printing a six-month high, as the U.S. dollar fell along with equities after disappointing data from China overnight flagged fears of a slowdown in global economic growth. 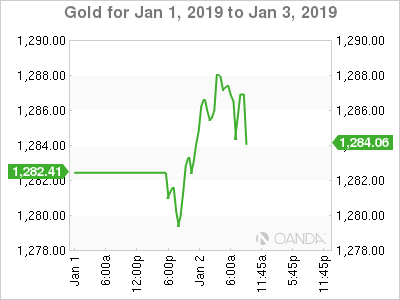 Overnight, German government Bund yields dropped to its lowest in 20 months as investors piled into one of the safest assets in the world on the back of widening stock market weakness and a gloomy global growth outlook.

On the horizon, supply will be an important factor for eurozone bond markets this month as countries start their annual funding programs.

Note: January is usually being the busiest month of the year. 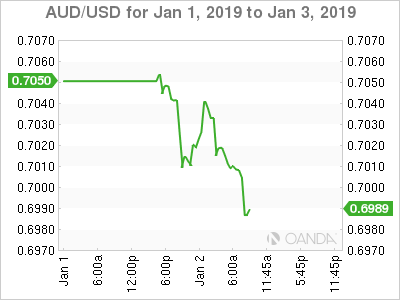 4. Dollar under pressure from lower yields

The ‘mighty’ dollar has been dragged down by a steep fall in U.S. Treasury yields over the last month as the market prices in the U.S. Fed would not raise rates again in 2019, even though the Fed last month is still projecting at least two more hikes for this year.

The safe-haven yen has extended its broad rally as the U.S dollar dropped to ¥109.37 in the overnight session, its lowest since June last year. 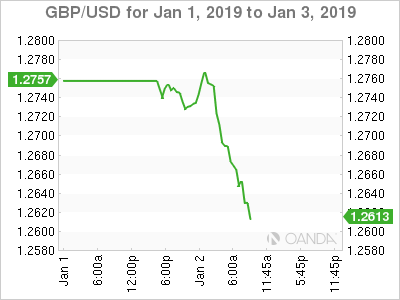 Data this morning showed that U.K. factories last month ramped up their stockpiling as they prepared for possible border delays when Britain leaves the E.U. in less than three months’ time.

The IHS Markit/CIPS Manufacturing Purchasing Managers’ Index (PMI) rose to 54.2 from an upwardly revised 53.6 in November, the highest reading in six months and stronger than all forecasts.

Markit said “the improvement did not herald a big change in the outlook for Britain’s stuttering economy and was caused in large part by manufacturers stockpiling inputs and finished goods, both of which were near record highs.”

Note: In December, the Bank of England (BoE) cut its forecasts for quarterly growth to just 0.2% in Q4 of 2018 and Q1 of 2019. It has warned that a worst-case Brexit could push Britain into a deep recession. 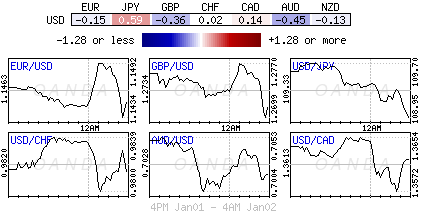