As anticipated, Asia Pacific benchmark stock indexes traded broadly lower following weakness in yesterday’s European trading session. Generally, market optimism has been taking a hit in what has been interpreted as a rather underwhelming G20 Leaders’ Summit this past weekend. An inversion in the US yield curve on certain maturities have also weighed against sentiment.

To add more complications to the political front, the Chief Financial Officer of Huawei, a major Chinese tech giant, was arrested for potential violations of US-Iran sanctions. China’s Shanghai Composite traded about 1.50% lower as this seemed to have ignited more US-China tensions. But, the damage to equities was not isolated to the world’s second largest economy.

Japan’s Nikkei 225 traded about 2.53% lower heading towards Thursday’s close, undermined by all sectors. Such an outcome would result in the index’s worst performance over the course of one day in almost six weeks. Meanwhile, Australia’s ASX 200 headed about 0.19% lower, weighed down by materials and financials. South Korea’s KOSPI declined roughly 1.6%.

Looking at currencies, the anti-risk Japanese Yen and Swiss Franc outperformed against their major counterparts. Meanwhile the pro-risk Australian and New Zealand Dollars depreciated. The haven-linked US Dollar, thanks to its world reserve currency status, rose as demand poured into local government bond yields.

US stocks were closed on Wednesday, but S&P 500 futures are now pointing considerably lower (-1.2%). This suggests that market pessimism may continue to reverberate into European stocks and that Wall Street is likely to gap lower. Sentiment-linked crude oil prices are continuing to come under pressure following mixed views on how OPEC may treat 2019 output cuts while US President Donald Trump favors lower prices.

Speaking of, the 175th OPEC meeting in Vienna is taking place over the remaining 24 hours. The Canadian Dollar may get a sigh of relief after yesterday’s less hawkish BoC rate announcement if higher oil prices might be in the cards next year. Otherwise, sentiment-linked currencies such as the AUD and NZD may continue experiencing selling pressure as the anti-risk Japanese Yen pulls further ahead.

With recent weakness in the Nikkei 225, the index now finds itself sitting squarely on a rising support line from late October. This is after failing to push above a horizontal range of resistance between 22,698 and 22,486. A push through support exposes the October low which is also closely aligned with levels achieved in mid-February and early March at 20,950. Falling through that opens the door to testing the current 2018 low at 20,347. 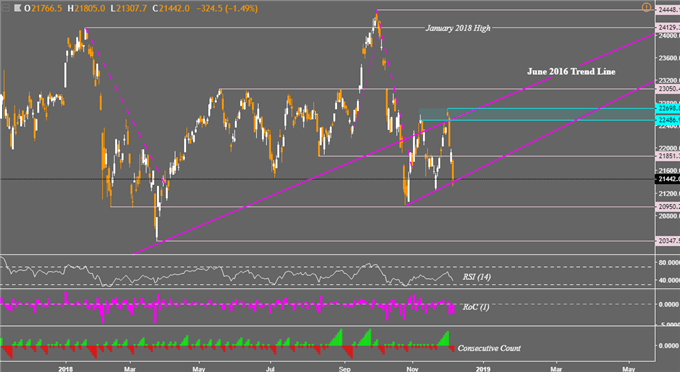