Just getting started trading currencies? See our beginners’ guide for FX traders to learn how you can apply this in your strategy!

The New Zealand Dollar failed to find a meaningful reaction from November’s RBNZ interest rate announcement despite the central bank leaving the door open to a cut. Rates were left unchanged at 1.75% as expected and the OCR forecast track was left unaltered. RBNZ Governor Adrian Orr noted that they could consider a rate cut if GDP falls short of their estimates.

It looks as though the stronger third quarter inflation and jobs report failed to significantly alter the 2019 implied RBNZ rate outlook. Recent gains in the New Zealand Dollar were accompanied with near-term rate cut bets being taken off the table according to overnight indexes swaps below. In fact, Mr. Orr noted that oil prices are boosting near-term headline inflation. Core CPI remains below their two percent target mid-point.

The US Dollar trimmed losses in the aftermath of the 2018 US midterm election results during Wall Street trade as anticipated. The Democrats took control of the House of Representatives while the Republicans hung on to their majority in the Senate. This increases the chance that US President Donald Trump may revive hopes of an infrastructure spending plan which could cause the Fed to hike more aggressively.

Indeed, US government bond yields rallied on Wednesday ahead of tomorrow’s Federal Reserve interest rate announcement. Meanwhile the S&P 500 and NASDAQ Composite gained about 2.12% and 2.64% respectively. This kind of trading dynamic was similar to what we saw after the outcome of the 2016 US presidential election where prospects of US tax cuts beefed up stocks and the US Dollar.

Thursday’s Asia Pacific trading session contains another speech from RBNZ’s Governor which the New Zealand Dollar will be closely watching. We will also get October’s Chinese trade statistics which could be at risk to downside surprises given slowing local growth and US tariffs. This could pressure sentiment-linked currencies such as the Australian Dollar lower and later, emerging markets.

Otherwise, we may see the Nikkei 225 and ASX 200 echo gains from Wall Street as market mood improves. This risks depreciating the Japanese Yen, which tends to weaken as traders use it as the funding currency in pursuit of carry trades. Meanwhile, the dominant downtrend in AUD/USD is at risk after the descending trend line from February gave way. Confirmation, via another daily close higher, may precede further gains. 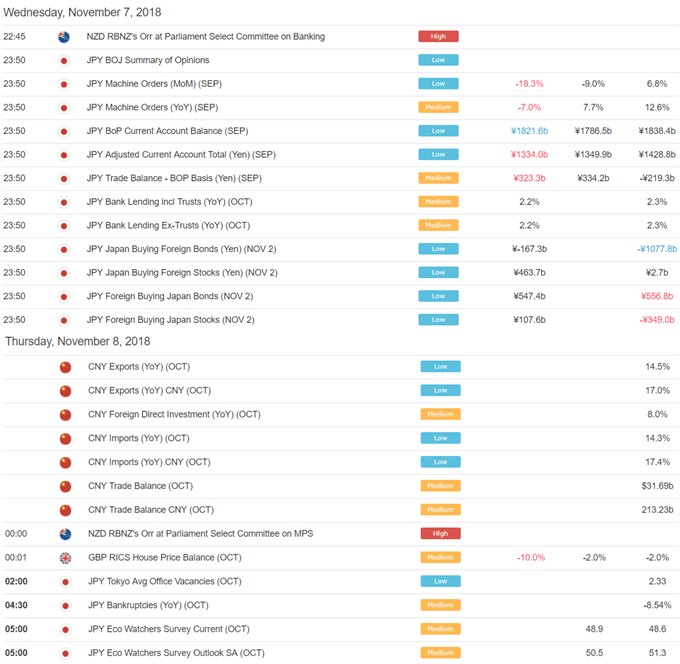