No End in Sight for Trend Lower

The GBPUSD price outlook remains negative as it continues to drop within a downward-sloping channel on the daily chart that has been in place since early May. After challenging and failing to rise above the resistance line connecting the lower highs recorded over the last three months, it now looks likely to weaken further, to support at the 1.20 “round number” and even perhaps to the channel support line currently at 1.1860. 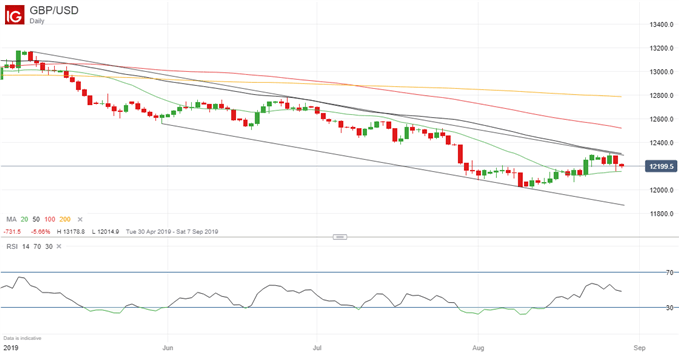 The latest slide lower follows UK Prime Minister Boris Johnson’s decision to suspend the British Parliament for almost a month, in a move seen widely as an attempt to prevent opponents of Brexit from thwarting it. John Bercow, the Speaker of the House of Commons, described the decision as “a constitutional outrage” and it has also increased the chances of both a “no-deal” Brexit on October 31 and a UK General Election this year. A second Brexit referendum is now highly unlikely.

Further Sterling weakness is also suggested by the latest IG retail trader positioning data. At DailyFX, we take a contrarian view of client sentiment and that data currently implies a bearish outlook for GBPUSD from a contrarian perspective.