Not Everyone Buys The Trump-Xi Trade Truce

By now, everyone knows that President Trump and President Xi agreed to a 90-day trade truce in Argentina. With this agreement, there will be no imminent threat of additional tariffs until March 1. Currencies and equities gapped higher as investors who feared the worst found the outcome satisfactory. However, aside from the initial move at the open, there was no continuation or additional gains during the North American session for stocks, the or high-beta currencies. This tells us that investors were not impressed by the “deal.” The 90-day clock starts on January 1 and during this crunch time, a deal must be reached or the White House will proceed with raising tariffs to 25%. The agreement requires that China must make substantial purchases of US goods immediately to reduce the trade imbalance and according to US Senior Economic Adviser Larry Kudlow, they have ballpark commitments of well over $1 trillion. He also expects China to remove tariffs on US car imports immediately. Of course none of these commitments has been publicly confirmed by President Xi. The good news is that for over 2 months, we’re probably going to hear more conciliatory headlines from both sides as they press the gas on negotiations. This will be good for risk appetite, equities and currencies. As we get closer to the deadline, however, the tone could shift – especially if they are far from an agreement. So while there are many who are not convinced that the Trump-Xi trade truce will turn into a trade deal, for the time being, it will help rather than hurt , , and other high-beta pairs that are sensitive to risk appetite.

The benefitted the most from the trade truce but like many other major currencies, its rally peaked at the London open. In this case, though, investors were reluctant to take the pair higher ahead of the Reserve Bank’s , especially after Sunday night’s economic reports showed vulnerability in the economy. slowed materially according to the PMIs, inflationary pressures eased, job ads are down, corporate profitability is weaker and fell. These reports give the RBA good reason to maintain its neutral monetary policy stance. In the past, the RBA has been slightly optimistic and it will be interesting to see if this sentiment changes because the positive turn in trade talks offsets the deterioration in data. The following table shows how Australia’s economy has changed since the RBA’s last meeting and while labor-market activity and consumer confidence is up, most of the business indicators are down. 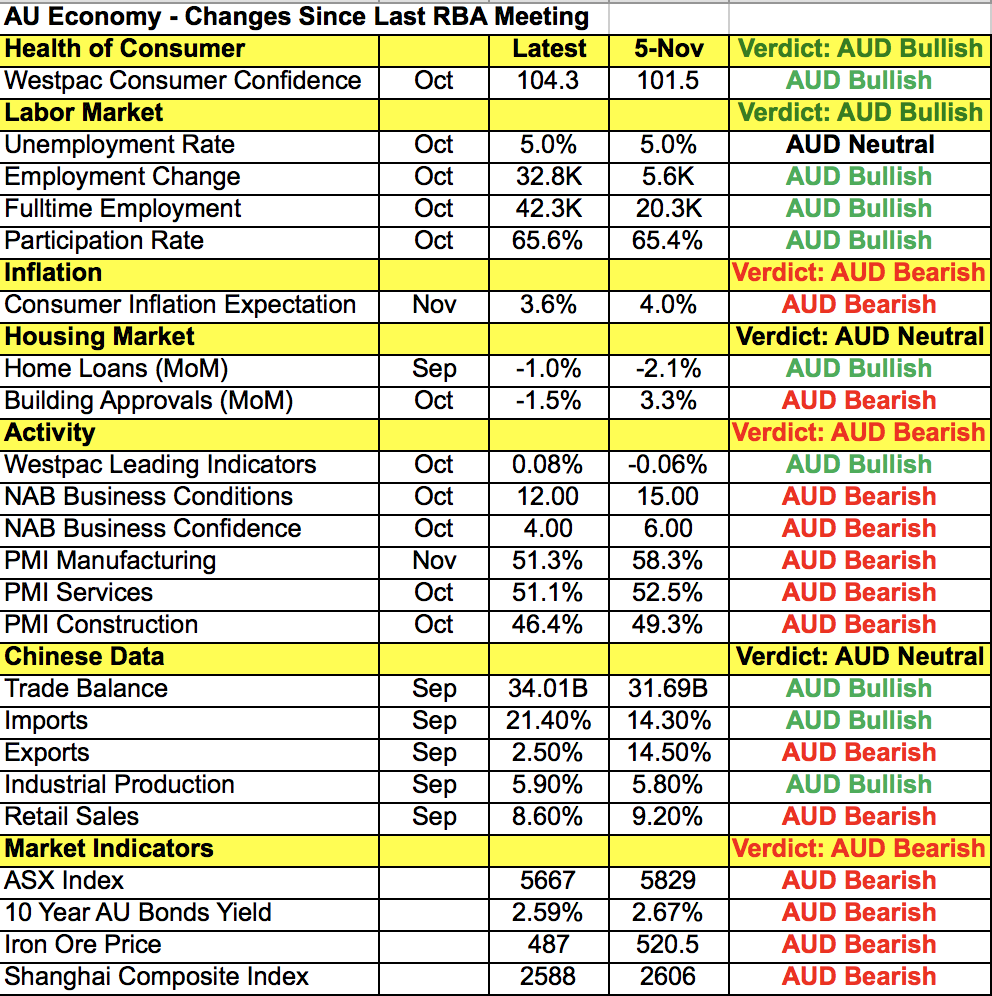 The and dollars also traded higher with the loonie rising on the back of the 4.4% recovery in . Monday’s big story was Qatar’s decision to pull out of OPEC. Although they are one of the smallest oil producers within the organization, its departure raises concern about the viability of the entire cartel. Its announcement comes days before a highly anticipated meeting where oil-producing nations are expected to reduce production in an effort to reverse the 20% slide we’ve seen in crude prices over the past 6 months. While USD/CAD ended the day off its lows, we believe that the pair will continue to move lower ahead of the Bank of Canada’s .

It is also important to mention the change in US data scheduling this week. Due to the U.S. national day of mourning for President George H.W. Bush on Wednesday, all of that day’s US economic reports such as and the index will be delayed until Thursday. US equity and bond markets will be closed but the report will still be released at 2pm ET on Wednesday. Fed Chair also canceled his congressional testimony to Congress. The hearing will be rescheduled, but a new date has not been set. This was a highly anticipated meeting because investors are eager to see if Powell clarifies his comments about interest rates last week.

ended the day higher versus the US dollar after some headlines suggested that Italy could scale back its deficit plans. , on the other hand, failed to participate in Monday’s risk rally despite stronger-than-expected . As our colleague Boris Schlossberg noted:

traders ignored the news as Brexit woes continued to dog the pair on reports that as many as one-third of PM May’s party may vote against her deal on December 11.