The Liberal party was re-elected in May 2017 in Nova Scotia. Since, the positive economic momentum has strengthened further. Propelled by multiple investment projects, improving international and interprovincial migration flows, stronger non-U.S. exports and a rebound in full-time employment, Nova Scotia is currently among the top-ranked provinces for business confidence.

Combined with sound management of government expenditures, the growing Nova Scotia economy generated above-par fiscal performances. First, the FY 2016-17 debt-to-GDP ratio was revised down from 37.1% to 36.3%, thanks to an unchanged debt level ($15B) and a 2.3% nominal GDP expansion (see chart). Second, this ratio declined further to 35.5% in FY 2017-18, reflecting a robust increase in 3.4% nominal GDP and a tiny surplus ($21M representing 0.1% of GDP).

Given this solid fiscal improvement, there was no need to introduce major tax changes or significant alterations to spending programs in this budget. Fiscal revenue and expenses are both projected to increase, on average, by 2% annually. Accordingly, the three-year outlook projects very small surpluses of about 0.1% of GDP in the medium-term, allowing the debt-to-GDP ratio to gently decline further to 33.4% by FY 2020-21 (see chart). The province is looking for to achieve an ambitious debt ratio of 30% or less by 2024. This target had been previously recommended by an independent expert panel (The Nova Scotia Commission on Building Our New Economy).

In summary, the main takeaway for bond investors should be that Nova Scotia’s fiscal house remains in order. The province is home to the lowest debt-to-GDP ratio east of the Canadian Prairies, with room to fall further given the N.S. government’s ability to prudently manage its public finances. Finally, there is a positive risk worth highlighting and which is not mentioned in the budget documents: the potential development of a large platform to transport liquefied from Goldboro. Government decisions relative to environmental issues and the building permit for the project are expected over the course of 2018. The materialization of this large-scaled project would translate into significantly stronger economic activity, helping along the way to lower the debt-to-GDP ratio below current projections. 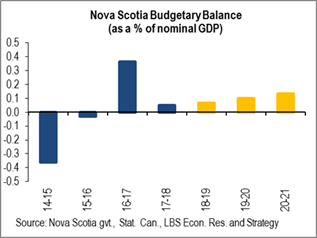 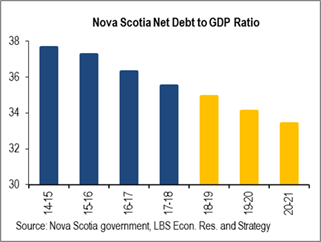