Fourth quarter earnings for chipmaker Nvidia were reported after the close Thursday and a strong performance sent shares 8% higher. Revenue for the quarter was $2.21 billion versus the expected $2.20 billion. Earnings per share were similarly rosy, $0.80 versus $0.78 expected. The strong performance is somewhat discounted given the broader context.

On January 28th, Nvidia announced before market open it had lowered guidance for the fourth quarter. Slowing sales in China due to the US-China trade war and economic slowdown concerns were cited as headline reasons for the revision. Nvidia’s share price reacted accordingly, trading roughly $25 lower as the session opened. Thus, Thursday’s earning beat serves to simply recapture some of the lost share price from the earlier guidance change. 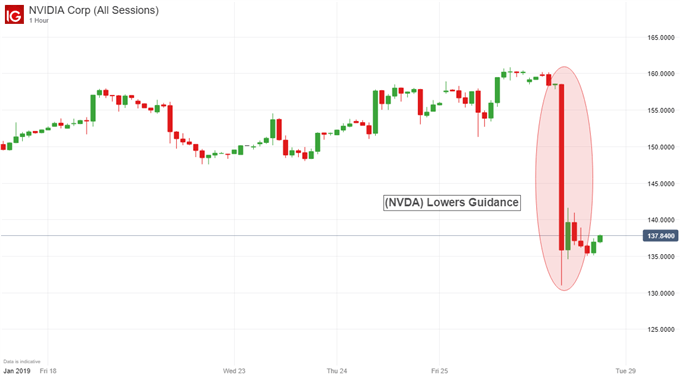 That said, Nvidia may not be out of the woods yet. Revenue and earnings for the coming quarters have all been revised lower as the company faces a litany of headwinds. Trade wars, slowing global growth, sector cyclicality and the apparent end of the cryptocurrency boom all serve to pressure the chipmaker moving forward and they are reflected in Q1 forecasts. Forecasted revenue read $2.2 billion, notably lower than the $2.41 billion expected by analysts.

Nvidia Earnings and Revenue in Nearby Quarters (Chart 3) 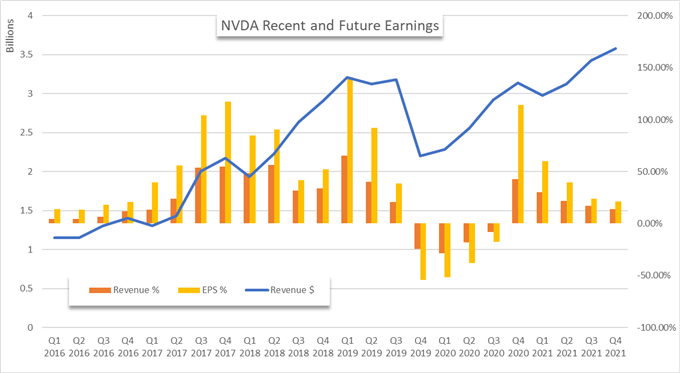 As for the immediate impact, the results may serve to buoy the share price and provide a tailwind for the chipmaker sector as well as the broader Nasdaq index in tomorrow’s session. While entirely possible, the earnings report will have to compete with other fundamental themes. 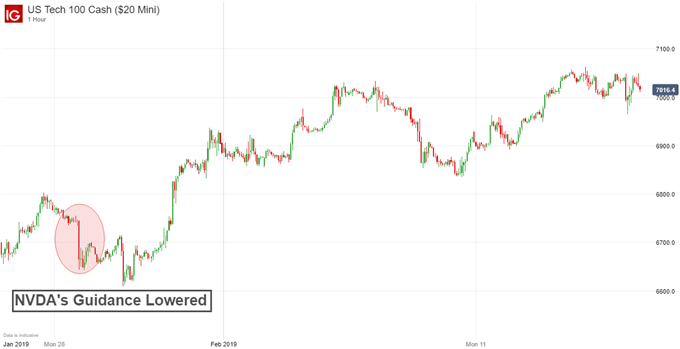 At the top of the list, trade wars remain. US and Chinese officials will meet again tomorrow in Beijing as reports emerge that little progress has been made toward meeting the demands of either party. Elsewhere, the government shutdown seems to have been averted as President Trump announced he will sign a funding bill which was subsequently passed by the Senate. This development could also serve to provide optimism in tomorrow’s session.