The big news this week was that turned negative on Monday as the May contract for the American benchmark, WTI, was about to expire. This was not unexpected and reflected the fact that storage prices climbed too high for sellers stuck with May delivery. 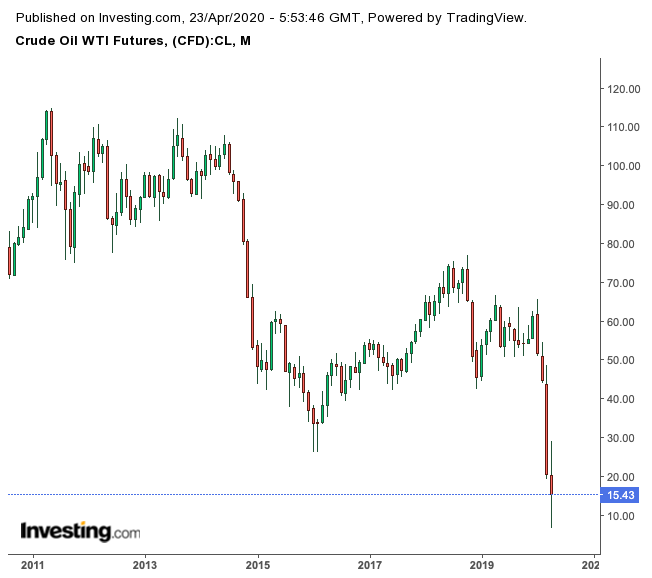 Prices for delivery in June and later months are elevated but remain extremely volatile. Will oil market skittishness continue? Three issues are worth watching to determine what may happen next:

1. U.S. Storage Matters, But So Do Production Numbers

Much of the focus for America’s oil situation has been on storage rather than production. While storage capacity is important, it isn’t the only significant metric. It just happens to be much easier to measure than production in the United States.

The U.S. Energy Information Administration (EIA) reported an increase in stored crude oil of for the week of April 10. This is higher than what API predicted but doesn’t dramatically alter the expectation that storage capacity in the United States—which excludes the Strategic Petroleum Reserve or SPR—will reach capacity sometime in May.

These numbers shouldn’t overshadow what we are learning about production declines. According to the EIA report for the week of April 10, output in the U.S. declined 100,000 bpd to 12.3 million bpd. More producers are reporting that they are shutting in production. One small offshore producer said it has shut in 20,000 bpd of production that could be offline for as long as two years.

However, it is important to remember that anecdotal evidence may not be reflective of the larger situation. Measuring the decline in U.S. output is challenging because production in the U.S. is reported to the EIA voluntarily and not all producers participate. Weekly data should be interpreted as reflective of a general trend.

2. Where Is Saudi Oil Going And Will They Cut Beyond Their Commitment?

Saudi Arabia increased its production in April to its maximum rate of 12 million bpd, but it has committed to cutting production down to 8.5 million bpd in May. There is still uncertainty over whether Saudi Arabia actually signed contracts to sell all of its April production. According to the Saudi oil minister it has, but Aramco officials have indicated that this is not the case and Aramco will have tankers full of oil stranded with nowhere to go. As I wrote earlier this month, we could see another price crash if it is conclusively determined that Saudi Arabia could not sell its April oil.

New reports are that Saudi Arabia has already started to cut production to get down to the 8.5 million bpd it has committed to for May. But the market has decided that Saudi Arabia’s committed cut isn’t enough, particularly given its massive overproduction in April. Pressure is mounting for Saudi Arabia to slash production faster and more drastically. Every time oil prices drop significantly, voices out of Saudi Arabia claim it is considering deeper cuts with OPEC+, but these words mean nothing to the market. If Saudi Arabia is left with unsold oil from April, will that finally compel it to make deeper cuts?

U.S. states including Texas, Oklahoma and North Dakota are considering regulating oil output. Each of these states has its own regulatory bodies that could mandate some degree of production cuts for oil producers within their jurisdiction.

The important issues they are considering include (a) whether regulating production will hurt oil and gas infrastructure investment in the long run, (b) whether state regulations are necessary when market conditions are bringing production down organically and (c) whether mandating production cuts would hurt or help the economic viability of companies and the oil industry as a whole.

Last week, the Texas Railroad Commission held a hearing on the subject where numerous companies spoke in favor or against proration and answered questions from the three elected commissioners. Earlier this week, the commissioners decided to put off the decision to prorate (the term used by states to regulate production) or not until May 5.

Oklahoma regulators decided in a 2 to 1 vote that some unprofitable oil production can be classified as “economic waste.” This could be a first step towards issuing production limits on companies, though at this point the decision will be used by producers to maintain leases on wells that they decide to shut involuntarily. Oklahoma will hold a hearing on prorationing on May 11.

On Tuesday, the North Dakota Industrial Commission decided not to declare oil produced at an economic loss as “waste.” North Dakota is not yet considering limiting production, but it is watching Texas and Oklahoma and could entertain the possibility. According to the Director of the North Dakota Department of Mineral Resources, the state is issuing well waivers that allow companies to voluntarily shut wells. North Dakota has received requests for waivers for 5,000 wells, which it estimates could result in a drop of 295,000-300,000 bpd in production.

Although the case for states to regulate oil production is stronger now than before, it seems unlikely that Oklahoma, Texas and North Dakota will decide to take what is widely seen as a drastic measure. The state regulators may be able to avoid the decision and let market forces bring down production naturally. However, if one state regulatory body does decide in favor of prorationing, others might follow.