Crude looks poised for a larger recover ahead of the Organization of the Petroleum Exporting Countries’ (OPEC) 175th meeting on December 6 as oil prices break out of a narrow range, and recent developments bring the topside targets back on the radar as the Relative Strength Index (RSI) finally bounces back from oversold territory and flashes a textbook buy-signal.

Fresh comments from Saudi Energy Minister Khalid Al-Falih appear to be rattling the recent rebound in crude as the official warns that it’s ‘premature’ to adjust production, and it remains to be seen if OPEC and its allies will deliver a major announcement ahead of 2019 as producers ‘figure out what needs to be done and by how

The comments suggest there’s a growing rift within the alliance especially as Qatar plans to leave the group to focus on liquified natural gas (LNG), and a lack of consensus to respond to falling oil prices may foster a more bearish outlook for crude amid the weakening outlook for global demand.

With that said, OPEC and its allies may attempt to buy time and avoid overemphasizing the recent volatility in oil prices, but sentiment surrounding crude remains skewed as the retail crowd continues to bet on higher oil prices. 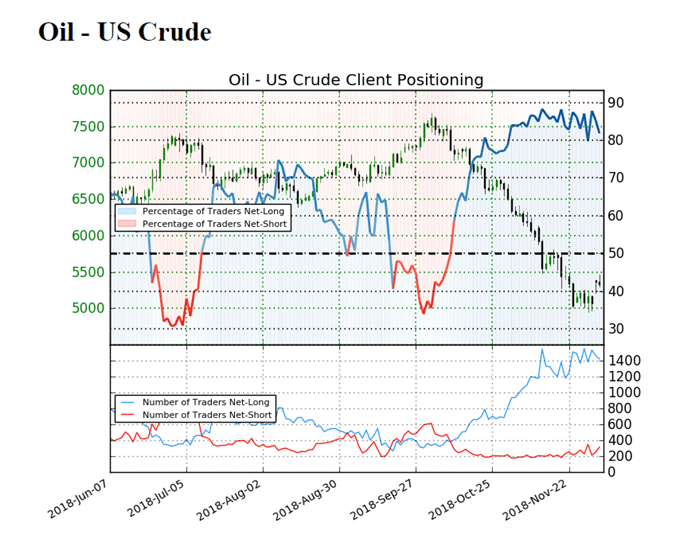 The IG Client Sentiment Report shows 81.8% of traders are still net-long crude compared to 81.9% last week, with the ratio of traders long to short at 4.5 to 1.In fact, traders have been net-long since October 11 when oil traded near the $71.00 mark even though price has moved30.1% lower since then. The number of traders net-long is 4.6% higher than yesterday and 3.4% lower from last week, while the number of traders net-short is 5.7% higher than yesterday and 16.2% higher from last week.

Despite the uptick in net-shorts, the ongoing tilt in retail position provides a contrarian view to crowd sentiment as traders continue to bet on a near-term recovery. As a result, the broader outlook for crude oil remains tilted to the downside as it snaps the upward trend from earlier this year, but recent developments in the Relative Strength Index (RSI) warns of a larger rebound as the oscillator bounces back from overbought territory and climbs above 30. Sign up and join DailyFX Currency Analyst David Song LIVE for an opportunity to discuss potential trade setups. 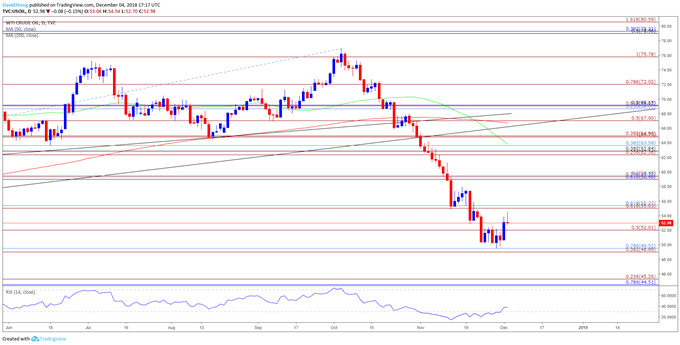 For more in-depth analysis, check out the Q4 Forecast for Oil