HomenewsAnalysisOil Production Cut Update: What To Expect Next From The Largest Suppliers

Oil Production Cut Update: What To Expect Next From The Largest Suppliers

Oil prices, particularly , continue to show extreme volatility. On Tuesday, Apr. 28 WTI plunged by 20% as the June contract experienced a major sell off. Then on Wednesday, WTI jumped by over 30% on news that some U.S. states plan to ease the restrictions that have caused oil demand to fall and that U.S. grew less than expected. 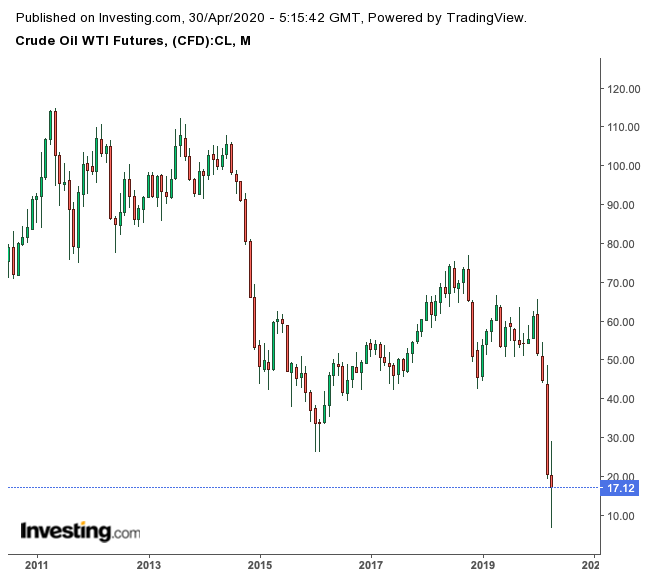 Still, both WTI and prices remain severely depressed. Oil prices will only recover significantly when demand returns to near full strength.

Before the economic shutdowns, global oil demand was about 100 million bpd. Even as restrictions are gradually lifted, it will take many months to see demand restored to that level. One of the difficulties for anyone trying to forecast the growth rate of returning demand is the lack of precise information on how significantly demand has actually dropped so far.

However, there is a factor influencing oil markets that can be closely monitored: oil supplies. It must be understood that any reasonable production declines on the horizon won’t be able to substantially lift prices in a way that demand growth will, given that the current . Nevertheless, falling oil production will help lift prices, and we can anticipate seeing small jumps when news of a supply contraction comes out.

Here’s where production declines and cuts stand so far and what we can realistically expect from some of the world’s largest oil producers:

Oil production hit 12 million bpd in April, but Aramco (SE:) started to reduce production earlier this week in preparation to meet its commitment to slash production to an average of 8.5 million bpd in May and June. However, as I warned about earlier in April, Saudi Arabia looks like it will be stuck with excess supply from April. This is becoming more evident as U.S. customers canceled orders for seven supertankers of Saudi crude that were loaded in April. Nevertheless, we can expect Saudi Arabia to fully comply with its OPEC+ commitment for May and June. Historically, Saudi Arabia keeps its OPEC commitments, and the production cut is not logistically difficult for Aramco.

Russia agreed to decrease oil production by an average of 2 million bpd in May and June, but implementing these reductions is challenging. According to a report in the Wall Street Journal, oil pipelines in Siberia are in danger of freezing even in May and June if they do not carry enough oil. Moreover, many old wells may be too expensive or difficult to restart if production is shut off.

Russia has several oil producers, and they are supposed to share the cuts proportionally. However, some Russian producers are already lobbying the Russian energy ministry for exemptions. One Russian company, Tatneft (MCX:), did announce plans to shut 40% of its wells, but other companies have not provided any information on how they plan to comply. Given the logistical and engineering challenges, as well as Russia’s history of failing to comply with its commitments to OPEC+, traders should expect to see some declines in Russian production, but not the full 2 million bpd.

According to S&P Global Platts, Kuwait produced 2.9 million bpd in March. It committed to lower its production by 23% and started cutting production on April 23.

Brazil did not make any firm commitments to limit oil production at the G20 energy meeting on April 10. Brazil is not an OPEC+ member. The formal communique from the G20 simply stated that members would “take all the necessary and immediate measures to ensure energy market stability.” Initially, state oil producer PetrobrasR (NYSE:) planned to decrease oil production by 200,000 bpd on April 1, but on April 28 Petrobras decided not to implement these cuts just yet citing strong demand for its fuel oil in Q1.

The United States started 2020 as the world’s largest oil producer, averaging 13 million bpd. On April 29, the EIA reported that oil production ending the week of April 24 was 12.1 million bpd. Earlier in April, the EIA forecast that U.S. oil output could be expected to decline by 2 million bpd, but there are reasons to doubt that this forecast will prove accurate. Based on information from six U.S. energy companies, RystadEnergy projected that U.S. oil production would drop by 300,000 bpd in the months of May and June.

Production could decline even more if the Texas Railroad Commission (TRC) votes in favor of a 20% reduction in oil production in the state. Texas would enforce the cut with a $1000 per barrel fine. The three-person commission will vote on the proposal after another hearing on May 5. One of the commissioners supports the proposal, another recently came out against it and the third is unlikely to support it, but has not said which way she will vote. Comparable regulatory bodies in Oklahoma and North Dakota may soon consider similar regulations, although if the Texas Railroad Commission votes against regulating production cuts Oklahoma and North Dakota are unlikely to decide in favor.

Norway’s oil production is centrally managed by state oil producer Equinor (OL:) and is about 2.1 million barrels per day. As of April 21, Norway’s oil minister said that the country had not made a decision about whether to voluntarily lower oil production, but on April 29 the Norwegian oil ministry announced that it would trim slash production by 250,000 bpd starting in June and 134,000 bpd in the second half of 2020.