Futures on the , and and European shares slipped into negative territory this morning, reversing the upbeat trend seen in Asia earlier today as well as in the US on Friday. US equities wrapped up last week by posting their best daily session since June 2016 on signs that the US and China are finally making progress on trade talks as well as on an that beat analysts’ expectations.

Europe’s gave up early gains, led by Germany’s —whose listed companies are particularly sensitive to exports amid a global trade war. Similarly, basic resources, also sensitive to tariff headwinds, ranked among the biggest gainers in the early European morning, climbing 1.2 percent, along with other trade sensitive sectors.

Chipmakers were also recovering from last week’s heavy losses, sparked by Apple’s (NASDAQ:) shock revenue warning on Wednesday. AMS (SIX:), which supplies the iPhone maker, was up more than 8 percent.

During the Asian session, regional equities started the week on the right foot with an exuberant rally, following last week’s upbeat US jobs data, signs of policy easing from China and hints by the Fed that it will keep market conditions under consideration when fine-tuning interest .

China’s advanced 0.72 percent, as the PBoC cut reserve requirements for banks and high-level representatives from the US and China begin talks in Beijing today.

On Friday, US shares soared on robust employment data, rising and robust . All major indices advanced at least 3 percent, with the gaining as much as 4.26 percent. Overall, the gains marked one of the steepest daily ascents of the current bull market. The question is whether they underscored persistent strength or just additional volatility within a downward trend. 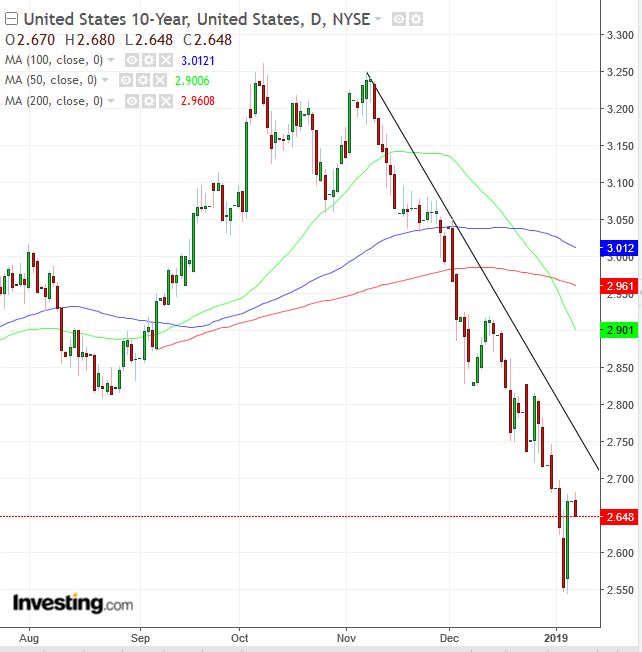 The yield on Treasurys fell below 2.65 after government bonds sold off on Friday, wiping out nearly two days of gains. Technically, yields are falling after nearing their downtrend line since November, when they reached the highest level since 2011. Also, last week the 50 DMA crossed below the 200 DMA, triggering a Death Cross, a widely followed technical indicator showing deceleration. However, they still remain more than 50 basis points below their November peak. 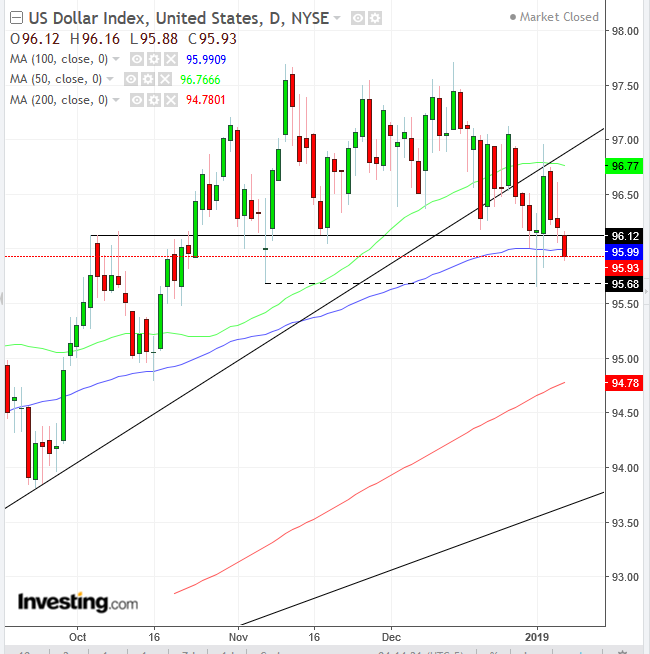 The followed yields lower, posting further signs of a top as it slid below the 96.00 support/resistance level since October 3 and below the 100 DMA.

In an unusual market occurrence, the is outperforming among major currencies, as Fed Chair Jerome Powell’s dovish twist sharply reduced demand for the greenback. Furthermore, is rising alongside Treasurys: these are all telltale signs of market risk-off, even against upbeat equities. The last time stocks and bonds rose substantially in parallel was after Trump’s presidential victory in 2016. 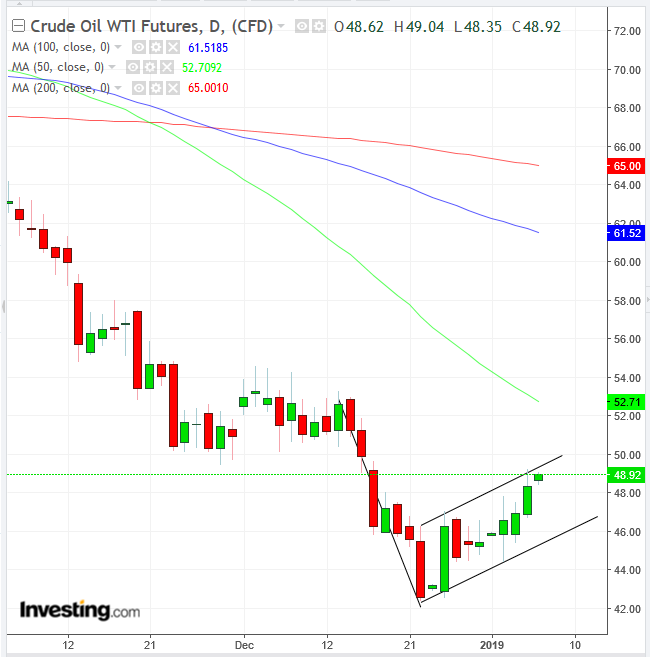 is climbing for the sixth straight day, inching toward the $49 level, for an accumulated 7.26 percent gain. Technically, the price is at the top of a rising flag, bearish in a downtrend, with a downside breakout.