Following a slump this morning in Asian markets, stocks in Europe gapped down in Thursday’s early trade, with the pan-European taking its cue from the downward move seen in the . US futures on the , and also pointed lower, suggesting the equity retreat may be poised to spill over onto the US session.

The across-the-board selloff during the Asian session came after several sets of data confirmed that China’s growth decelerated to multi-decade lows, as the PBoC decided to keep rates on hold after the Fed hike. Investors promptly rotated out of equities and into bonds, driving US yields lower. The yield on Treasurys had once again crossed the key 3.00 percent level yesterday, while today’s climb is weighing down on the .

The widespread risk-off sentiment also boosted the for a second day, which in turn weighed on Japanese shares, which are broadly reliant on exports. The slipped 0.9 lower, closing at the bottom of the session.

Ironically, after key Chinese economic indicators including and came in significantly lower than expected this morning, China’s still outperformed among Asian benchmarks with a limited 0.35 percent decline, thanks to an earlier 0.5 percent advance. Technically, it found support again above the 3,000 psychological level, which has proved to be a line of demand all year. Hong Kong’s dipped 1.3 percent intraday, but then closed 0.93 percent in negative territory.

South Korea’s underperformed regional peers and ended at the bottom of the session, 1.8 percent in the red, for an aggregate two-day 1.9 percent decline. The continued to strengthen.

Australia’s turned out to be today’s regional winner, retreating just 0.1 percent, for a total two-day decline of 0.6 percent.

Today’s losses follow a lackluster performance yesterday for US markets, as the Fed not only pressed ahead with an expected , but also signaled a steeper path to further tightening. 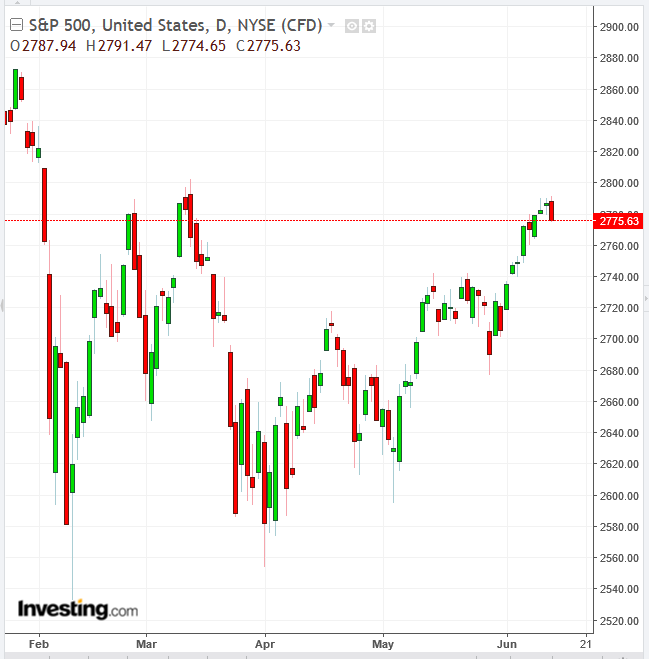 The confirmed a resistance line since late February, with an engulfing bearish pattern that wiped out more than two days of gains, thereby also confirming the resistance of Tuesday’s shooting star.

On the heels of yesterday’s disappointing US session, this morning’s releases from China indicate its economy seems to be quickly losing steam: along with slowing |industrial production and weaker retail sales, also came in at either multi-year or all-time record lows. Infrastructure spending, via fixed asset investment, dropped to 6.1 percent year-on-year, falling short of the 7 percent expectation, posting the slowest pace of expansion since the National Bureau of Statistics started reporting the data in 1996.

Retail sales in May ticked 8.5 percent higher, nearly 1 percent below April’s figure and missing the 9.6 percent estimate. It was the weakest performance for this metric in 15 years. Finally, Industrial output increased 6.8 percent, also missing the 6.9 percent forecast and slowing to a 22-year low.

The rapidly emerging picture of a slowing Chinese economy follows the government’s crackdown on high risk bank leverage over the last few years, which has led to higher costs of borrowing for both businesses and consumers.

The stack of negative economic data also stayed the hand of the People’s Bank of China, which left borrowing costs for interbank loans unchanged today. Markets were expecting the PBoC to pursue its longstanding policy of keeping the spread between US and Chinese yields stable in order to avert sharp declines in the and hasty capital outflows—which have often plagued the domestic economy.

The sudden shift in the outlook for China’s economic growth comes about a month after we indicated something like this could be developing.

Germany also disappointed expectations, albeit in late May, posting its weakest quarterly economic growth in a year: grew at a 0.3 percent pace—half the figure of the prior quarter—mainly because of a slowdown in trade momentum. The deceleration of the biggest European economy underscores an increasingly evident trend that sees Europe as the weakest link in the synchronized global growth story—in stark contrast to mid-last year, when Europe replaced China as the leader of global growth.

With mounting signs that both the European and Chinese economies are slowing, can the US hold on to its expansionary trend, or will it be dragged lower? Statements from the FOMC press conference yesterday signaled that US policymakers are betting on ongoing growth. Fed Chair Jerome Powell said the US economy is in “great shape,” warranting additional monetary policy tightening. 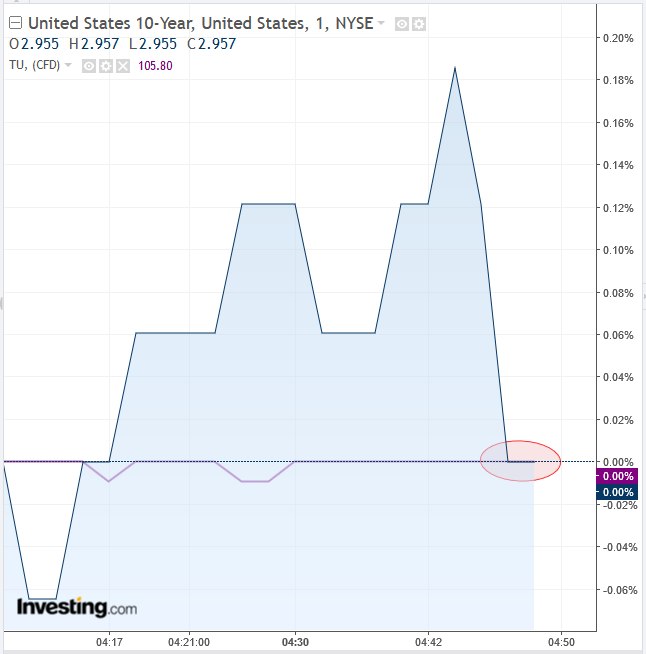 However, an important market indicator is telling a different story: the US yield curve flattened after the Fed hinted at a , with the gap between the and 10-year rates narrowing the most since 2007. A spread flattening may lead to an inversion in the yield curve, which means shorter term notes pay a higher yield than longer term notes. This in turn becomes a key indicator for an upcoming recession.

The emerging divergence among global economies may influence narratives in another area as well. Considering the political agenda pushed forward by US President Donald Trump has so far pivoted around trade, and given Trump’s diplomatic combativeness, it seems likely he might leverage the resilience of the US economy against shrinking growth in both Europe and China to argue the US holds the upper hand at the negotiating table.

As well, the Trump administration is still considering whether to follow through on its plans for $50 billion-worth of tariffs on Chinese goods, after some conciliatory statements recently released by both Chinese and the US officials failed to translate into any concrete step forward. 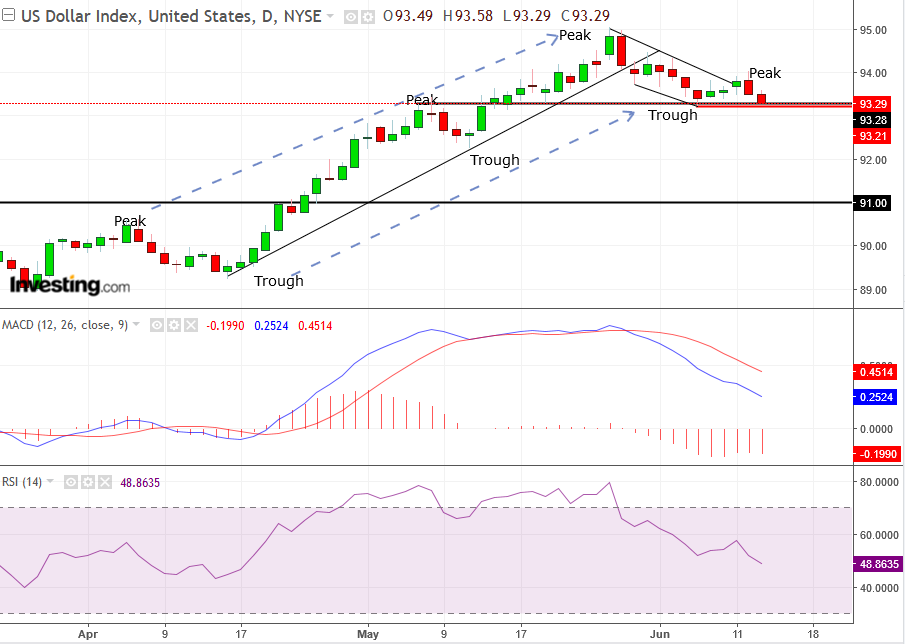 Ironically, the dollar is sliding lower despite the Fed’s surprise signal yesterday, of a fourth rate hike this year. It’s possible tradersbelieve that the ongoing trade war risk will overshadow the benefits of a stronger-than-expected outlook for rates. They may also be pricing in indications that European policymakers will soon start tapering QE, which is expected to be announced later today at the . 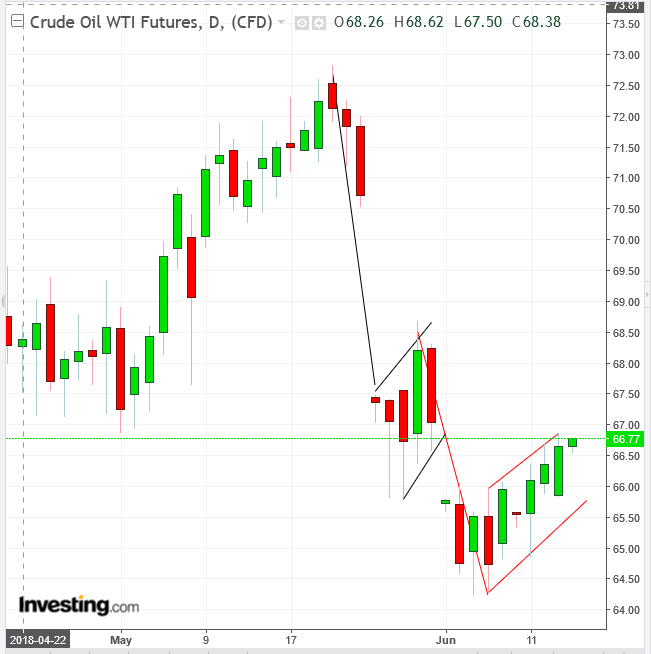 WTI edged higher in the European session, following reports that China and India are looking to step up demand for US oil to counter possible price strategies from OPEC countries. Technically, the price is retesting the upper boundary of a second consecutive bearish rising flag.