European shares and futures on the , and NASDAQ 100 followed Asian stocks into a robust rally this morning, while 10-year Treasurys dropped, after data showing a pick up in China manufacturing activity eased concerns of a global slowdown. Expectations of some diplomatic breakthrough in the upcoming round of U.S.-China meetings in Washington later this week also boosted market sentiment.

All major Asian benchmarks closed markedly in the green, resuming their most substantial quarterly gains since 2012. China’s surged 2.58% and Hong Kong’s added another 1.76% after both the Caixin and the NBS manufacturing PMIs smashed estimates, prompting hopeful investors to pile up on local shares on speculations of a bottom in the country’s economy.

Investors rotated into risk assets, sending safe-haven Treasurys, yen and gold lower. A weakening gold price sends a very bullish signal, considering it occurs alongside a decline in the dollar—which in turn is pressured down by sliding Treasurys, as foreign buyers repatriate capital.

Overall, global stocks are testing the waters for bringing their Q1 gains into the second quarter, counting on the world’s central banks to lay out more accommodation to support earnings growth.

However, while the current rally already pared most of the losses shares suffered in the fourth quarter, yields languish at multi-year lows, suggesting the outlook for a slowdown is still on the cards. While upbeat Chinese data eased some concerns, eyes will be on the U.S. jobs report this Friday to jibe with these positive readings. 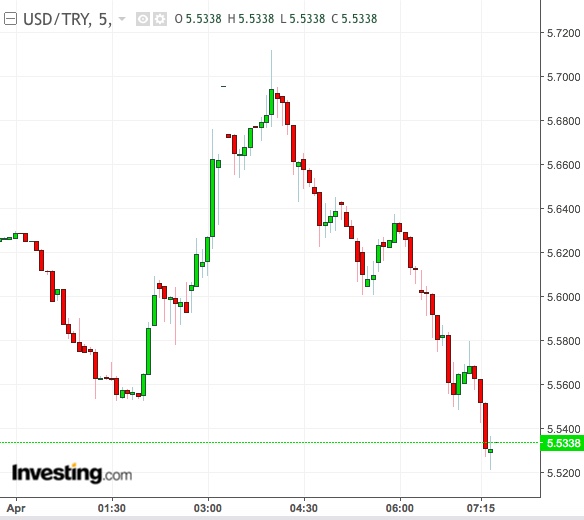 In FX trading, The Turkish lira tumbled as early local election results suggested President Recep Tayyip Erdogan’s popularity is slipping—though it later attempted to crawl higher. The pound gained ground even as an ongoing impasse over Brexit increases the potential of general election in the U.K.—for the third time in just four years.

In commodities, the relief coming from stronger Chinese figures helped the price of WTI reach its highest level since Nov. 8. Some analysts warned oil’s Q1 32% surge may be a tough act to follow.