European stocks as well as the extended their rallies this morning. The former benefited from a two-day slide in the while the latter won favor with FX traders even before Fed Chair Jerome Powell before the US Senate yesterday. His outlook for US economic expansion was broadly seen as bullish.

Powell’s portrait of a Goldilocks economy, where is near an 18-year low and is hovering around the Fed’s 2-percent target, would support the Fed’s current trajectory for tightening. It also sent the and the to new record highs.

Currently, however, futures on the , and are mixed. Which suggests that this morning traders may still be weighing a broader variety of triggers.

Conversely, it seems that there were only buyers trading the , setting it up for a strong opening. They bid prices up 0.3 percent from yesterday’s close in order to find willing sellers, thereby creating a rising price gap. The rally then extended to 0.55 percent, registering higher prices than the preceding June 11, 386.87 high. The higher peak extended the uptrend within the rising channel since late June.

Japan’s climbed 0.35 percent for a four-day 2.55 percent gain, though trimming a 0.88 percent intraday high. Technically, it retreated from a downtrend line since May 21.

China mainland slipped a further 0.39 percent, giving up an earlier 0.75 percent rally and bringing its aggregate four-day slide to 1.75 percent. Technically, it remained above yesterday’s hammer, but below the uptrend line since the July 6 bottom.

Hong Kong’s closed 0.23 percent in the red, at the lowest level since September 29. It lost 1.51 percent over two days.

South Korea’s edged 0.34 percent lower after the country’s government dramatically cut its outlook for the job market, as well as revising its GDP growth forecast lower. The index still managed to post a positive 0.93 percent intraday high. Technically, its higher open, 0.7 percent above yesterday’s close and higher than the two preceding sessions, formed a dominant bearish engulfing pattern. However, upon dipping onto the uptrend line since the July 5 low, the price rebounded slightly, demonstrating some demand.

Australia’s once again fared as the regional winner, posting a 0.68 percent rally. Technically, it bounced off a bullish flag, for the second time since Friday. 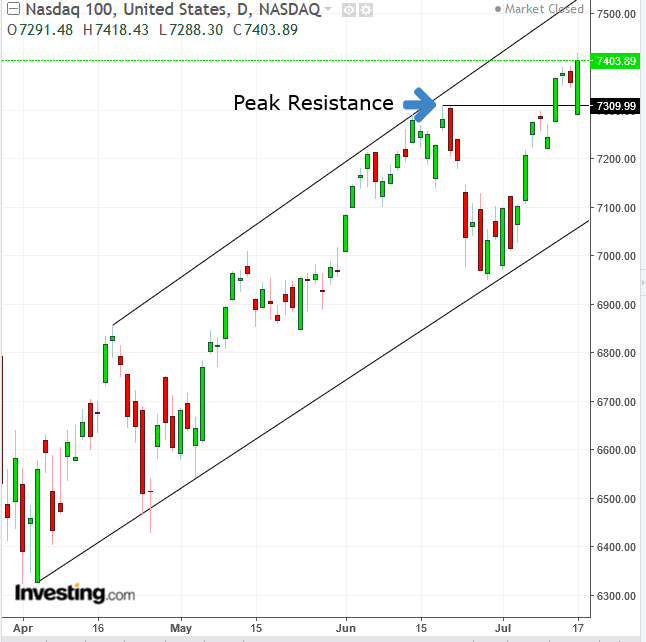 Both the NASDAQ Composite and the NASDAQ 100 moved 0.63 percent higher, hitting double records: on an intraday high and one on a closing basis. The ideal market environment painted by the Fed chair, coupled with positive earnings reports, helped traders forget about the worsening trade relations between the US and China.

The climbed 0.4 percent, with gains in (+1.31 percent) providing strong evidence that investors overcame their concerns around trade uncertainty. Meanwhile, the and the gained 0.23 percent and 0.51 percent respectively. 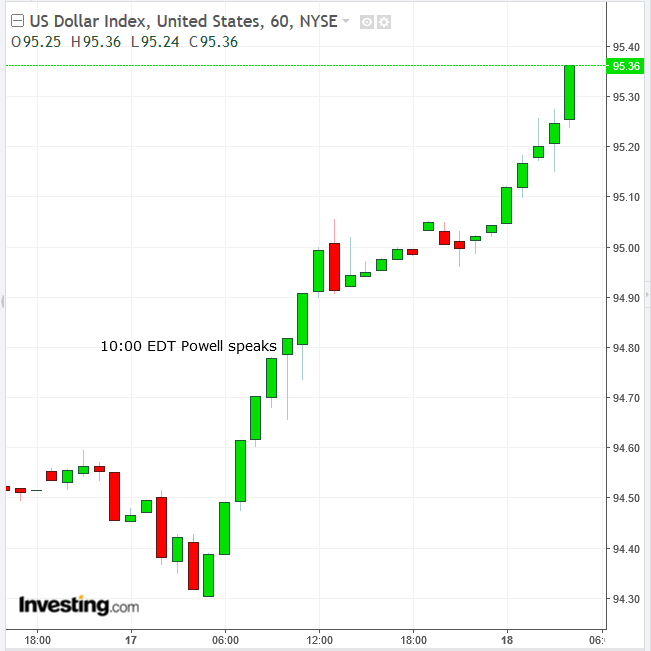 The greenback is trading at the top of the session and is only 0.12 percent from its June 28 close, its highest in over a year. Technically, it found a resistance by the top of a shooting star registered on July 13. While media indicated the greenback was boosted by Powell’s upbeat outlook on the US expansion, the truth is that traders didn’t know how to convert the chairman’s words into a coherent dollar strategy; he also provided some dovish signals, emphasizing that interest rate hikes will be gradual and are not on autopilot.

Powell’s signal that accommodation will continue a bit longer may be positive for equities—after all, looser monetary policy was responsible for the record-breaking string of stock rallies last year—but not for the greenback, whose intrinsic value is determined by its yield.

In fact, the dollar started climbing higher well before Powell’s 10:00am EDT testimony. When it began the reserve currency was already rallying for five hours. Moreover, after it fluctuated throughout his address, it ticked higher for three hours only, followed by a consolidation that lasted for 11 hours, till 12:00am EDT today.

Perhaps there are other drivers that have not yet come to light, or, maybe, it was simply random trading. The stronger USD sweighed on commodity prices and emerging market currencies. 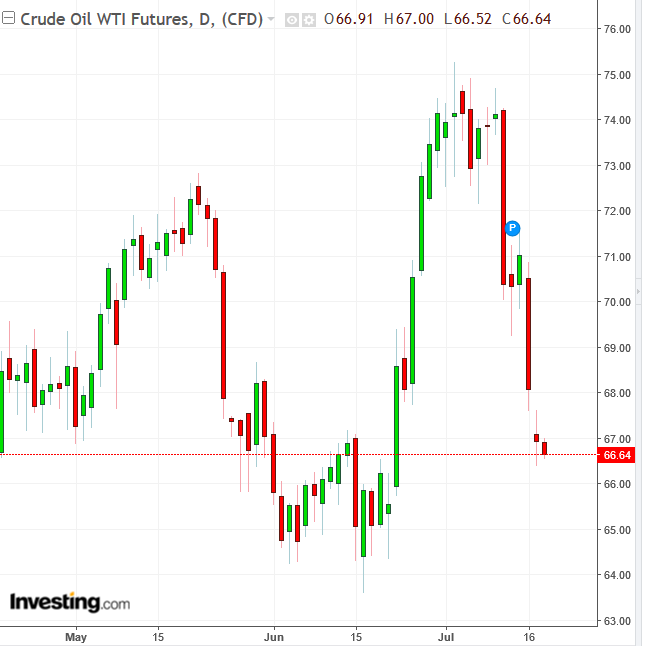 is falling for a third day, heading below $67, on reports that US President Donald Trump may look to tap into emergency oil supplies to offset higher prices, ahead of key midterm elections.