Equities in Europe as well as US futures—including for the , and —are currently all tracking this morning’s global open, following Asian markets higher. Traders appear to be shaking off any potential fallout from trade tariffs in anticipation of the upcoming earnings season, after data on Friday supported continued economic growth. Barring any surprises, we’re betting ongoing strong data and market technicals will be spurring investors to drive equities to new highs in the coming weeks.

The gained, with miners and energy companies outperforming. The pan-European index headed higher for a fifth straight day, its longest rally since March.

Earlier today, stocks rose across Asia as all major regional benchmarks rallied. Even in Tokyo—where investors continue to asses the impact of local flooding and landslides in Japan, which killed at least 90 people, knocking out electricity and forcing many companies, including Amazon (NASDAQ:), Mazda (T:) and Panasonic (T:), to halt some operations—the and were buoyant. So far, no selloffs have been seen for either the or for Japanese benchmarks though Mazda pared gains and Panasonic retreated.

Hong Kong’s was up as well, boosted 1.3% after enduring a week of losses. Today’s much anticipated IPO of smartphone maker Xiaomi (HK:) was of additional interest, though shares fell during the stock’s first day of trade. 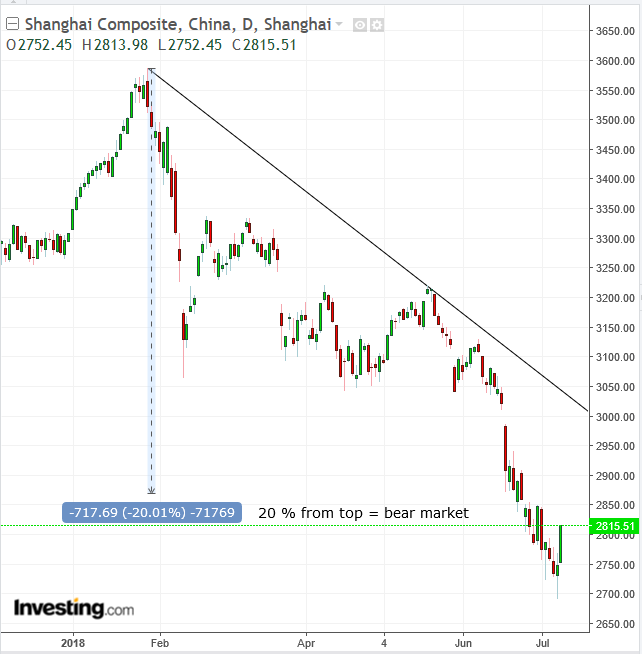 The clear leader this morning was, however, China’s which jumped +2.4 percent, despite Friday’s trade war escalation. Since the start of 2018 shares on the index have tumbled about 17 percent, though Chinese policymakers have tried to soothe investors with reassurances of solid fundamentals.

Additionally, in what may be considered an unprecedented signal, in its blog, officials of The Shanghai Stock Exchange indicated that beaten-down stocks are a buying opportunity after the index entered a bear market. Truth be told, it wasn’t just propaganda—continuing corporate growth and record share buyback values actually support this bullish assessment. 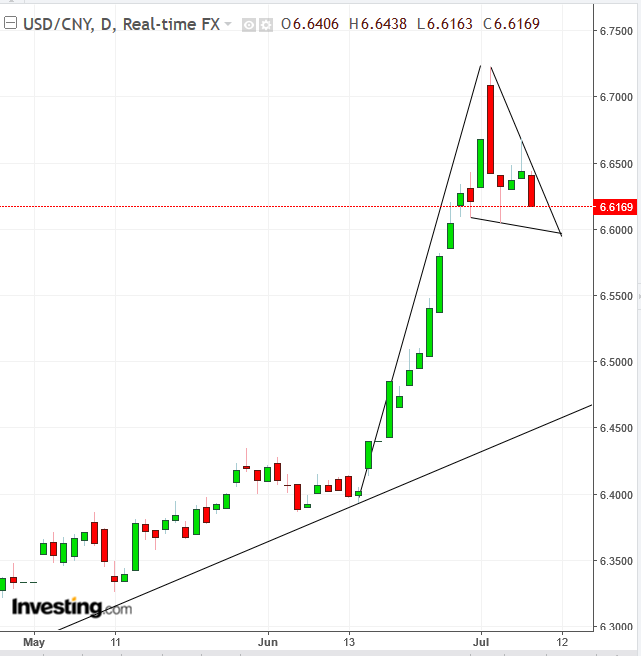 Another boost to Chinese equities, ironically, may have come from a 0.3 percent decline in the . Under normal economic conditions, a stronger currency weighs on a country’s exports, causing headwind for equities.

However, just a week after China promised the US that it would not manipulate its currency in order to use it as a weapon in the US-China trade war, the rising renminbi is easing the trade dispute. And China officials are seen to be keeping their word.

However, like the Shanghai Composite, the yuan is in a downtrend, in which upticks are considered merely corrections. On the other hand, the currency has been supported by demand, as it reached its lowest levels since the September peak, ‘protected’ by the 100 WMA (blue), after the 50 WMA (green) crossed below the 200 WMA (red), completing a Death Cross. The pair’s momentum has reached its most oversold condition since January 2017, when US President Donald Trump said “the strong dollar is killing us.”

The only Asian benchmark in an uptrend is Australia’s , which on Friday completed a bullish pennant pattern. 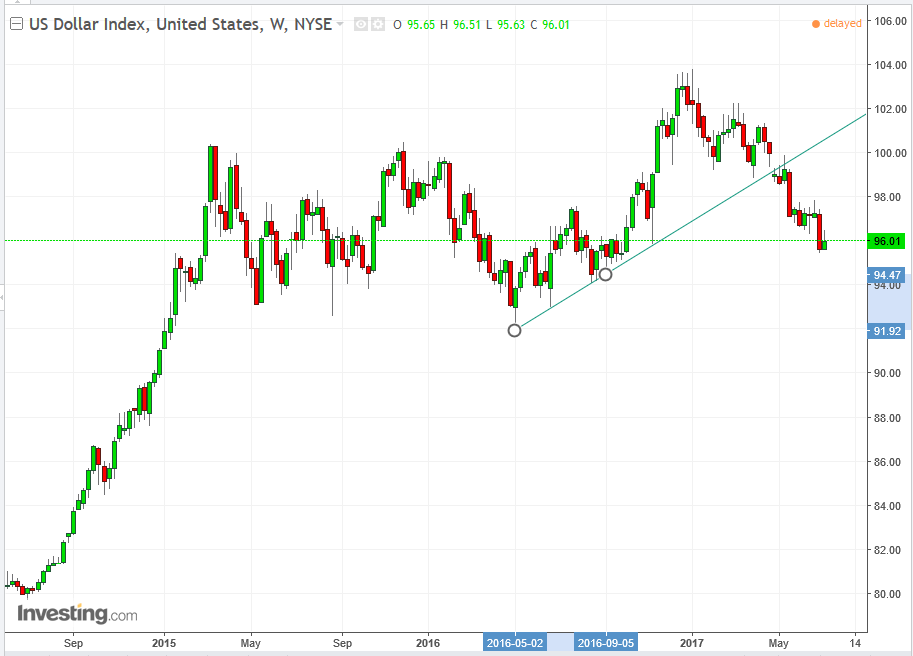 The fell to the lowest in more than three weeks, completing a small double top from June 14 through July 6, proceeding to cross below an uptrend line since May 14. The weakening dollar reduced pressure on commodities and emerging markets, which have been suffering from capital outflows to dollar-denominated assets. 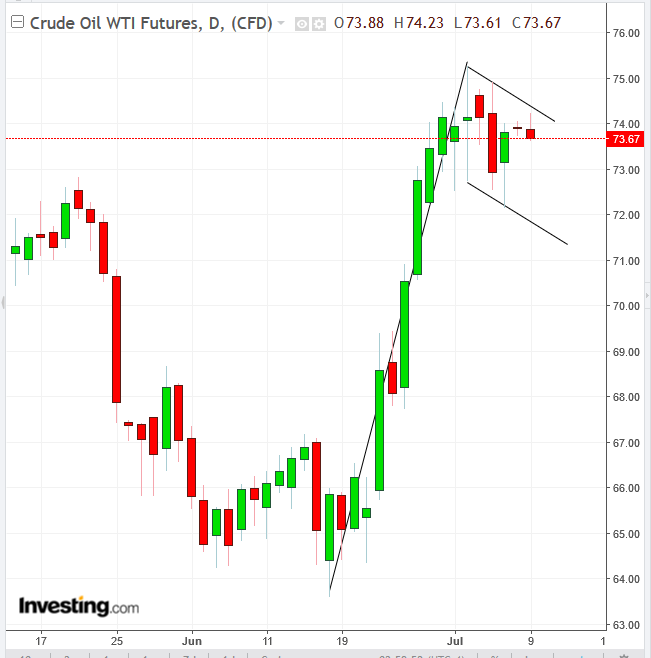 However, the weakening dollar doesn’t seem to be helping which fell below $74. In the longer term, though, a tightening market should provide a tailwind to the commodity. Technical analysis supports this as price formed a bullish, falling flag, which complete with an upside breakout.

trimmed gains after Brexit Secretary David Davis and Brexit Minister Steve Baker both resigned within 48 hours, over their opposition to UK Prime Minister Theresa May’s “soft Brexit strategy.” The departures are a significant setback for May, who believed her ministers backed the compromise.

If that weren’t enough for the beleaguered Prime Minister, Trump has been threatening to quit NATO unless Britain increases defense spending by 50%.

The is struggling to extend Friday’s advance, which was spurred by German recovering faster than expected, beating all estimates for May. The global economic outlook was additionally boosted on Friday after the release of June’s US which showed another month of gains, indicating more Americans are re-entering the workforce.

Should corporate results resume their growth trend, they would provide a third support for the outlook of economic expansion, joining macro economics and equities in giving investors the fresh wind to their backs with which to drive stock prices to new records, even though the ever-expanding trade war saga continues to simmer in the background.