The rallied against most other currencies this morning after a five-day selloff. The global reserve currency was boosted by yesterday’s release of the Fed’s which revealed that US economic policymakers remain on track for another rate hike next month, provided economic growth persists.

Treasuries are holding steady. However, the stronger dollar has weighed on and other commodities.

US futures for the , and the are, at time of writing, all flat as investors appear to be undecided regarding the impact of President Donald Trump’s most recent round of legal woes. The pan-European advance this morning; Asia was mixed.

Though the US imposed a fresh round of tariffs on $16 billion of Chinese imports, followed by China’s vow to retaliate, China’s still outperformed regional peers this morning, rising 0.37 percent. Japan’s was also up, gaining 0.25 percent. However, Hong Kong’s underperformed, dropping 0.54 percent, after a 4-percent bounce from last week’s low.

During yesterday’s US session the and indices retreated, as a selloff in stocks offset a rally in shares. 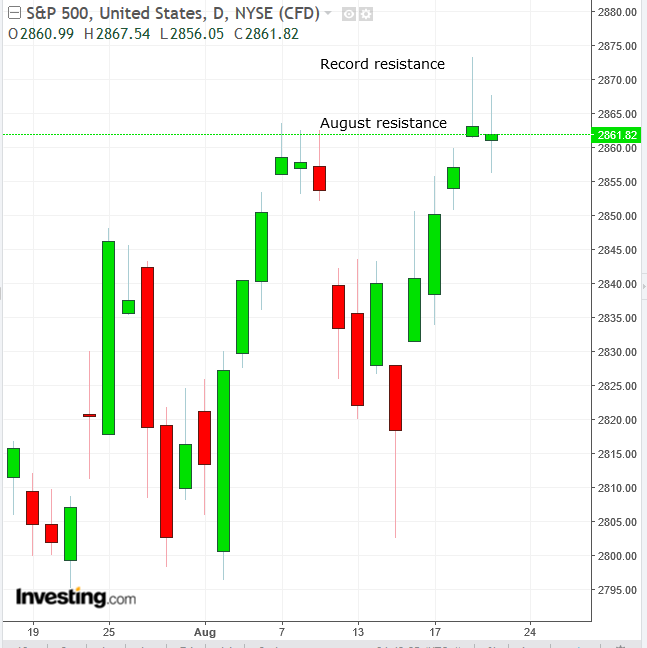 The S&P 500 Index finished flat, dropping less than a point, or 0.04 percent. Industrials (-0.97 percent) weighed on the benchmark, while the (+1.2 percent) and Technology (+0.3 percent) sectors halted the benchmark’s decline. Traders cashing out of winning positions spurred yesterday’s underperformance of Industrials, after the sector advanced 3.3 percent in the previous rally.

Technically, the SPX met with resistance, after Tuesday’s shooting star with a pronounced upper wick confirmed and presumably reinforced selling pressure at the levels of the August peak and the January record.

The fell 0.34 percent, as the firms listed on the 30-component index were primarily part of yesterday’s biggest sector underperformer. Technically, the decline wiped out nearly two days’ worth of gains, following yesterday’s shooting star, after the mega cap index posted its highest peak since the January correction.

The tech-heavy outperformed, rallying 0.38 percent, but remained below the preceding day’s shooting star. The small cap advanced 0.28 percent, revealing where the profits from the Industrials sector selloff went.

All eyes now turn to the , which begins this evening. It’s a meeting of global economic policymakers. This already significant summit may fuel markets, generating more volatility than usual, following Trump’s attacks against his pick for Fed Chair.

Though Trump may remain more subdued than usual as he tries to contain the fallout from his personal lawyer Michael Cohen’s guilty plea, which implicates the president in campaign funding violations, as well as the 8-count fraud conviction of Trump’s former campaign manager Paul Manafort, the president might instead opt to focus all his firepower on the Fed’s determination to end cheap money, something Trump has gone on record as being against.

The latter scenario would almost certainly drive intraday market swings.Traders and investors should keep their eyes on the ball. Trump’s political problems are mainly noise at this point, but economic data thus far supports the Fed’s trajectory for .

However, market participants should take note of the yield curve. If the difference between the and yields flattens, it’s often a leading indicator of upcoming economic reversal. Investors must want to pay attention to any developments regarding the US-Sino trade talks, on the heels of the most recent US tariffs on China goods. 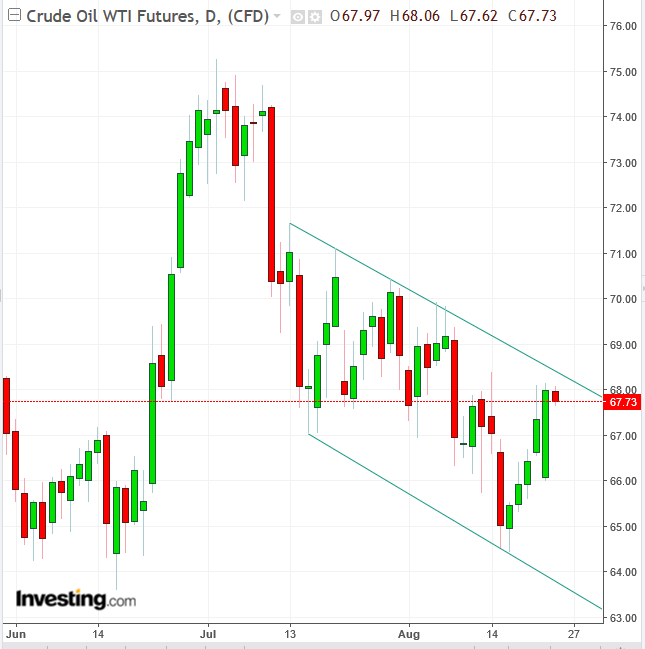 In commodity markets, the price of WTI, which is generally denominated in USD, has been hit by the reserve currency’s fluctuations. Crude’s technicals also show the price under pressure as it reached the top of a falling channel. A variety of regional fundamental developments could also drive the price of oil as the early November deadline for US sanctions against Iran looms.

The plunged 1.47 percent this morning, after a Trump tweet suggested the US would consider sanctions against the country, in response to a Fox News segment on the African nation’s land seizure debate.

The fell 0.55 percent, amid political instability, as Prime Minister Malcolm Turnbull faces the possibility of stepping down if his center-right party calls a leadership vote. Technically, the AUDUSD pair has resumed trading within a descending channel. 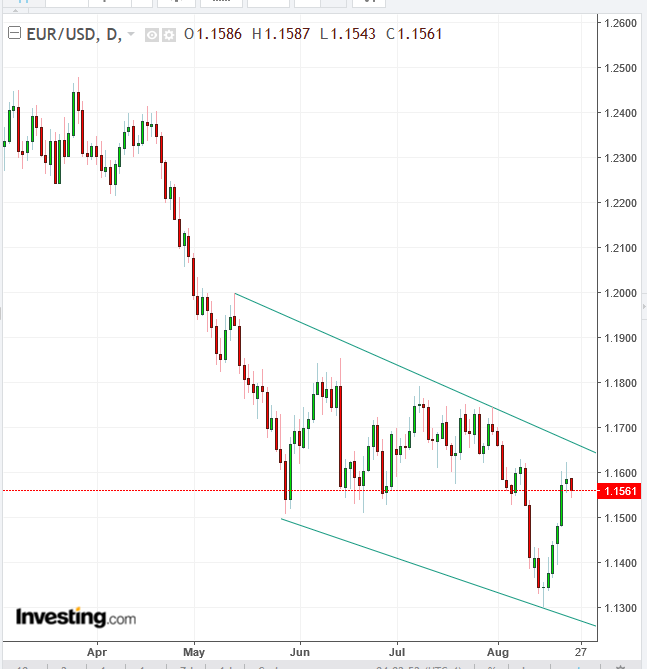 Traders are selling the ahead of the release of minutes from the . Technically, the price of the single currency wiped out yesterday’s unsustainable, volatile gains, as it approached the top of a falling channel.

All information provided is accurate as of time of writing