European equities fluctuated on Thursday morning, as the struggled to gain traction on the upward momentum of Asian shares. Equity markets in Asia were boosted by rising US Treasury yields, which nonetheless failed to lift the .

The greenback is extending losses today after it suffered its worst selloff since January on Wednesday, as market focus shifted once again from Italian political risk to US-China trade disputes. However, the downbeat dollar helped move higher after yesterday’s gains, which marked the biggest jump for the commodity since early April. However, as of this writing, WTI has been losing ground, down right now by 0.60 percent as the European session has progressed.

The failure by European shares to gain upward momentum from the Asian session may underscore investor confusion over a market narrative that, on Wednesday, had transformed a stock selloff into a buying dip. From this standpoint, the volatile market reactions seen earlier in the week from Italian headwinds may now look impulsive and unwarranted.

Overall, it seems, the gravity of broader geopolitical risk is dampening the upward momentum that started during yesterday’s US session—which saw US major benchmarks post their strongest performance in three-and-half months.

Although Asian equities rebounded across the board earlier today, it was on a much smaller scale. Plus, by the time the upbeat momentum had reached European markets, it was already showing signs of petering out. Does this mean that by the time the opening bell rings on Wall Street, momentum will reverse? Futures on the , and are posting mixed signals, hovering around neutral levels at the time of writing.

However, US stocks are not necessarily bound to replicate European weakness. We have recently pointed out that, for reasons we have yet to understand, as of late, global optimism seems to skip the European session. On more than one occasion we have see equities rally in Asia, drift lower in Europe and then pop again during the US session.

At least from a technical perspective, yesterday’s buoyancy confirmed that the current environment is a buyer’s market, just as the Treasury yield rebound highlighted that it’s a seller’s market for bonds, thereby confirming higher demand for stocks. 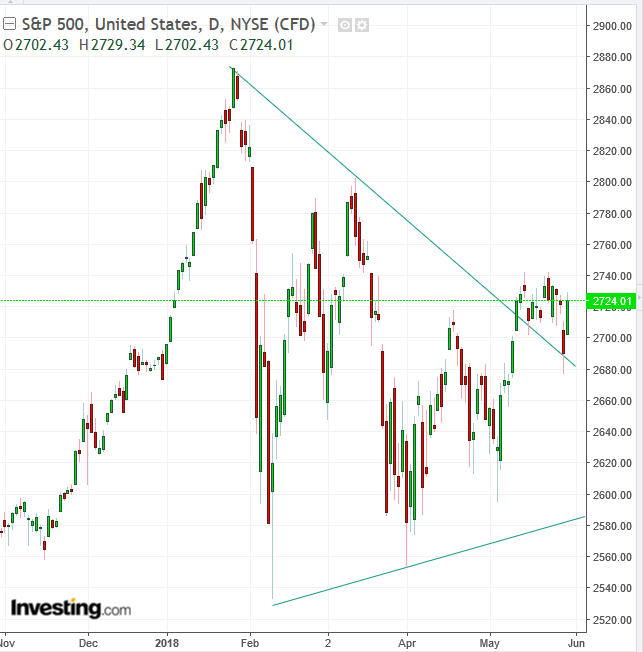 The SPX enjoyed its biggest rally since February 11 on Wednesday, confirming an upside breakout of a symmetrical triangle and suggesting a resumption of the uptrend prior to the February selloff. However, a bull trap may be in the works, as only an aggressive 1.00-percent filter has been satisfied.

During the Asian session, traders raced to buy into the equity selloff-turned-buying opportunity, as they grew more and more convinced that gloomy market reactions to Italian political jitters had in fact been overly pessimistic.

Japan’s gained 0.6, trimming yesterday’s losses from 1.45 percent to 0.8 percent and ending an 8-day decline. Still, it wasn’t smooth sailing, as prices kept fluctuating at least 0.2 percent in either direction.

Hong Kong’s opened 0.45 percent in the green, extended gains to an intraday 1.2 percent. It settled with a 0.95 percent gain, ending a two-day retreat.

The risk of a fresh round of elections in Italy, which would raise the risk of euroskeptic parties winning yet more voters and clearing the way for more intransigent anti- policies, subsided on Wednesday. The 5 Star Movement – League coalition is in fact looking to present President Sergio Mattarella with a re-jiggered government plan, which seems to be helping investors set the issue aside and focus on more immediate concerns.

US are set coming out on Friday. This report is particularly crucial since it’s the last reading before the Fed meets to during its June session, amid increased expectations for a —which would mark the seventh rate rise since December 2015. As such, might it be time to invest in yield rather than fixed-income stocks? Not necessarily. 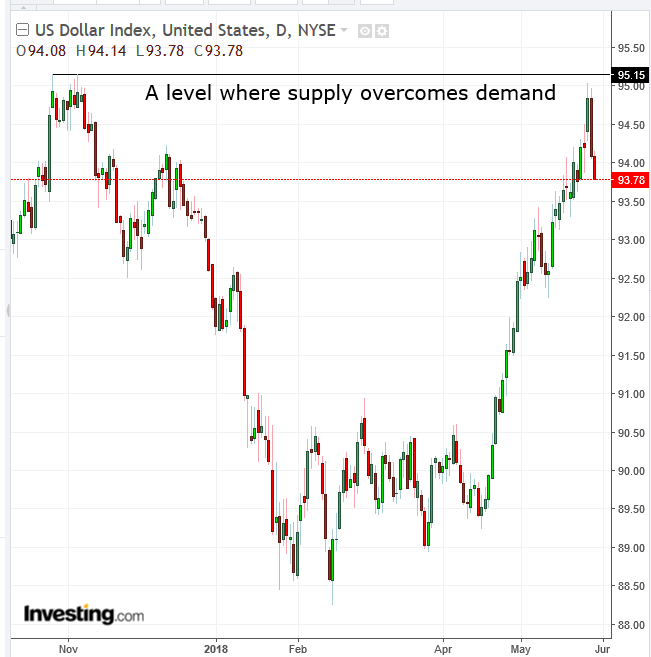 In other news, market fundamentals including trade war worries and the upward revision of s for France and other EU countries, coupled up with technical to push the dollar even further into its selloff, after it reached a price level on Wednesday where it was besieged by supply. 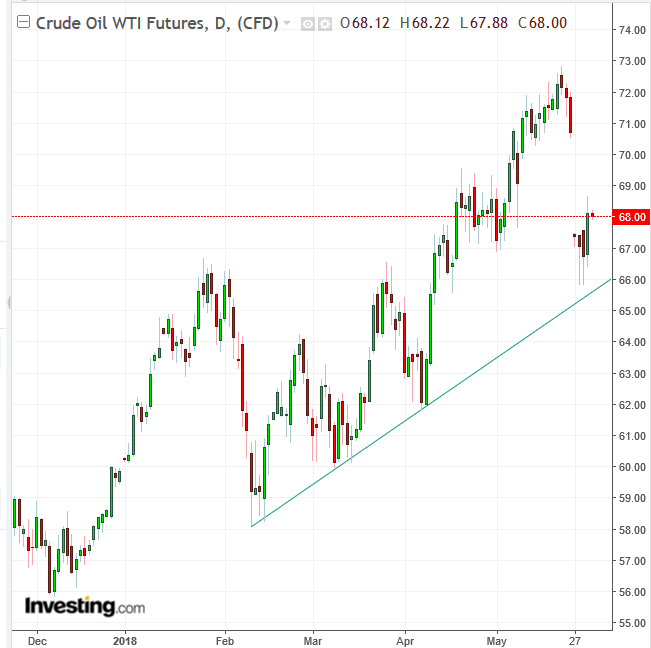 The USD’s slide supported oil, which held on to most of Wednesday’s gains in early trade. The fundamental driver of the WTI upward push was the decision by OPEC and Russia to keep production at current levels rather than stepping it up to cover potential supply glitches from Venezuela and Iran.

Technically, the price of WTI confirmed the uptrend line since February 11.