European stocks and futures on the , and opened the week on the back foot, as investors focused on earnings misses and moved to risk-off trade ahead of key interest rates decisions.

The slid lower with miners as well as food and beverage makers tracking a downturn in all the major Asian equity markets. Heineken (AS:), the world’s second-biggest beer brewer, a 1.89 euros EPS, below the 1.91 forecast. The company also cut its full-year margin guidance to reflect the impact of currency headwinds on revenues and operating profit. 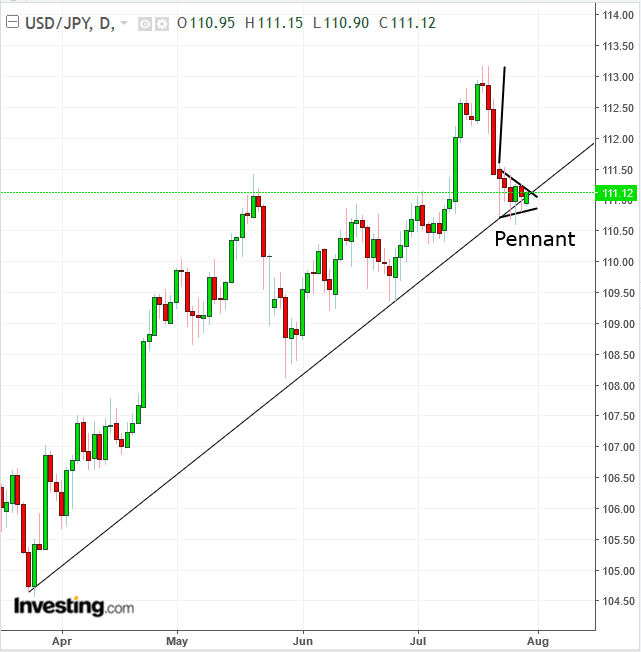 A jump by Japanese yields to their highest level in nearly a year and a half kicked off a week loaded with crucial monetary policy discussions by the , the and the .

Speculation that the Bank of Japan may cut back its massive asset-buying program and allow the yield to rise above its 0.100 percent target prompted the yield surge on Monday. Should those expectations materialize, an investor rotation into higher yields would entail a boost for the as well. Technically, the dollar-yen pair has developed a bearish pennant pattern right on top of the uptrend line. A downside breakout, as the greenback weakens versus its Japanese counterpart, would signal that yen buyers have absorbed all available supply at these levels and are prepared to bid prices higher in search of willing sellers.

Meanwhile, the Chinese extended last week’s decline and is set to close at the lowest level since June 2017. The yuan’s downward spiral, which has recently sparked US President Donald Trump’s criticism of Chinese authorities for alleged currency manipulation, significantly increases risk for equity markets as it pushes investors to shift to risk off trade and safe-haven assets. Such a move would jibe with our analysis that stocks and the are ripe for a correction.

In other news, creeped 0.95 percent higher, erasing most of Friday’s losses. Technically, the price has been consolidating since July 13 in a pennant-shaped, considered a continuation pattern. A downside breakout would signal that traders are prepared to resume the prior selloff since $75. The uptrend line since November 2017, currently at $66, will be the next test.